No matter the difficulty you’re playing on, at some point you get tired of manually fighting battles and micro-managing dozens of units.

This is where doomstacks come in, giving you a powerful army that requires very little in the way of micro management, but breaks your bank.

What are doomstacks in Total War?

Doomstacks are armies that ignore immersion and cohesiveness, favoring raw power instead.

Sporting 18-19 of the same unit, with a lord to buff them, makes doomstacks extremely potent. 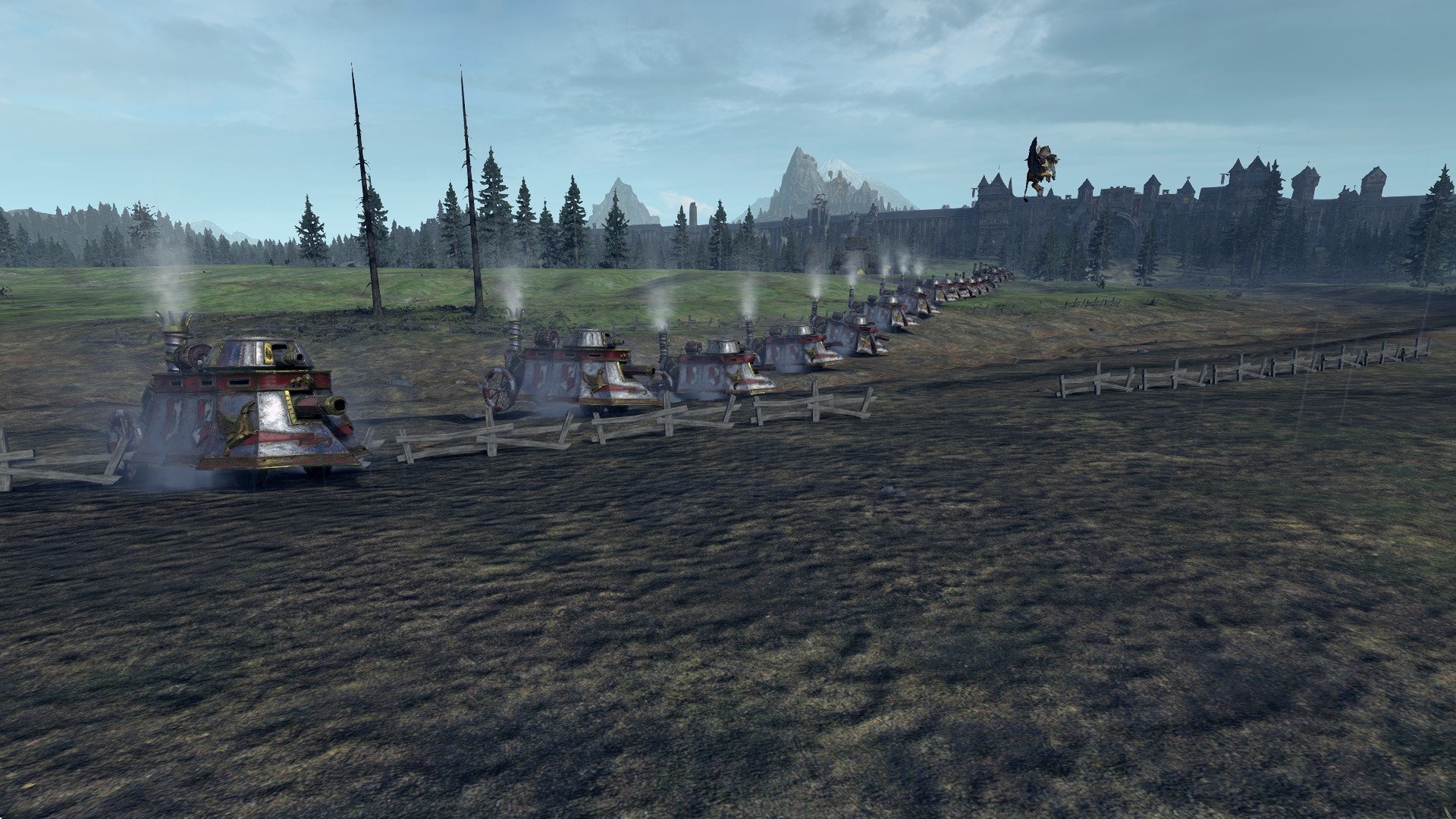 Few armies will empty your coffers like 19 Steam Tanks, but they’re one of the most fun doomstacks you can play in Warhammer 2.

Although they’re technically artillery, Steam Tanks are actually great front-line units, with the Unbreakable trait so they never rout, and the ability to cause terror and rout enemy units.

It’s imperative you take out enemy lords and heroes as they approach, as they will absolutely demolish Steam Tanks in combat, due to their low melee defence. 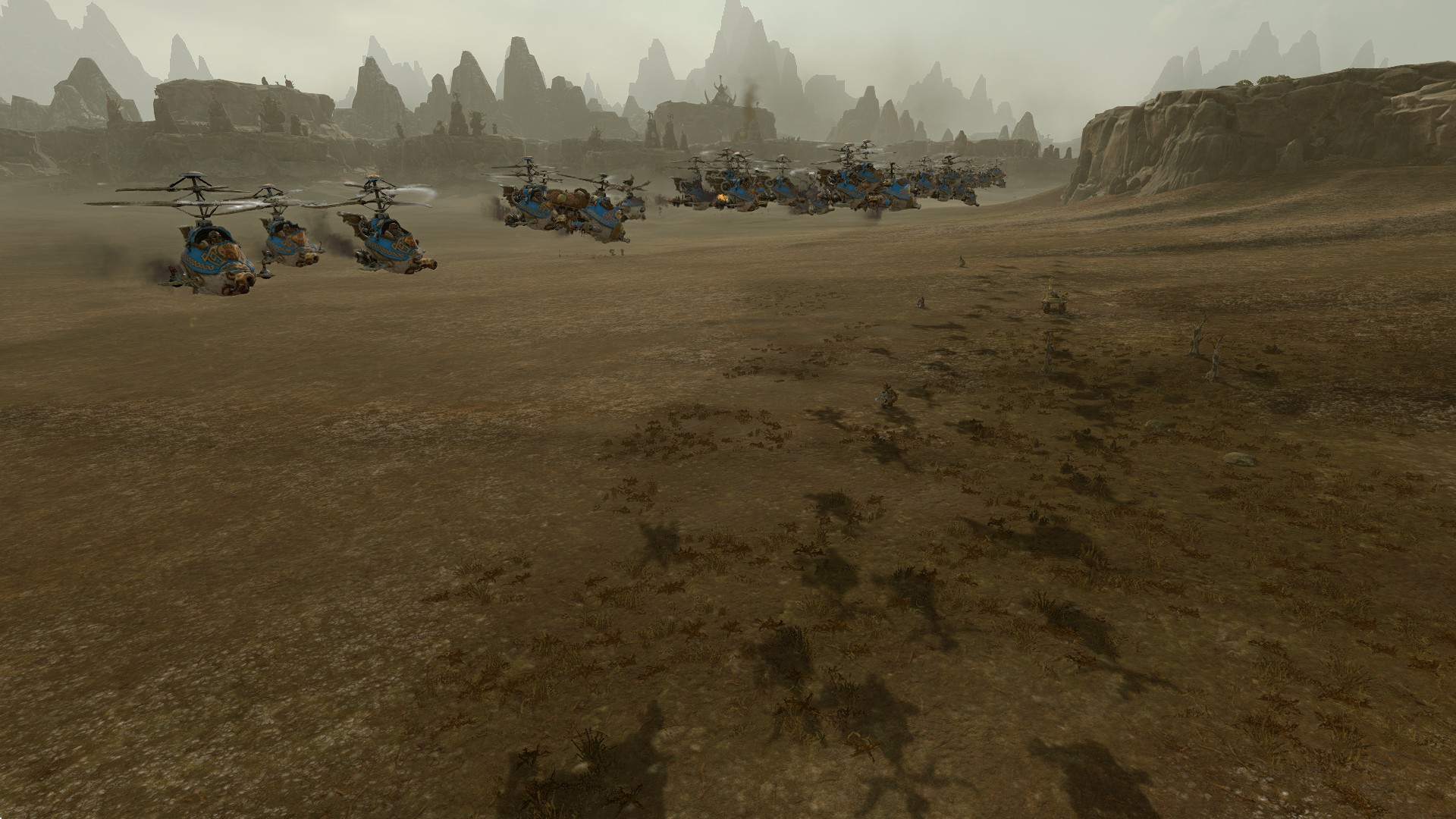 Dwarf doomstacks simply don’t exist, and this is the closest you’ll get, but it’s still a meme.

The idea is to get a lord, 2 thanes, and a runelord to fight infantry.

Use your copters to destroy the enemy ranged units, then bomb the huge blob of infantry surrounding your lord & heroes.

Mid-tier Dwarf units are still leagues above most other mid-tier units so fielding several armies is recommended, rather than aiming to get a few uber-stacks! 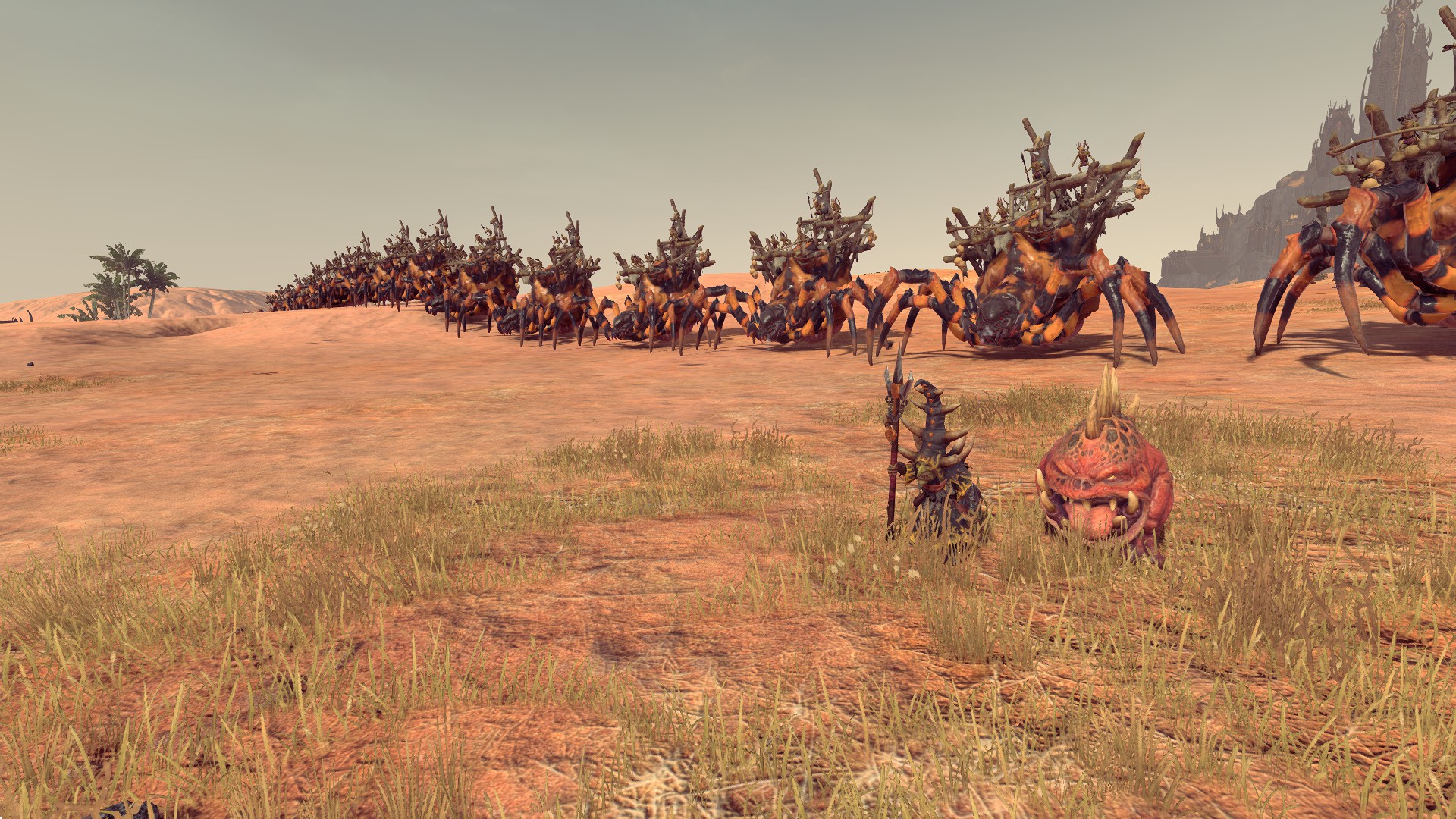 Arachnorak Spiders are some of the coolest units in the game, capable of decimating infantry and large units alike.

Due to their mass and entity size, getting stuck in infantry blobs isn’t too common.

They cause terror, significantly reducing the leadership stat of enemy units who are unfortunate enough to be stuck in combat with them.

Lords & heroes are their only real weakness, as they can hit them for huge damage and spiders will have trouble relatiating.

It’s best to massacre the rest of the army until army losses kick in, and they rout. 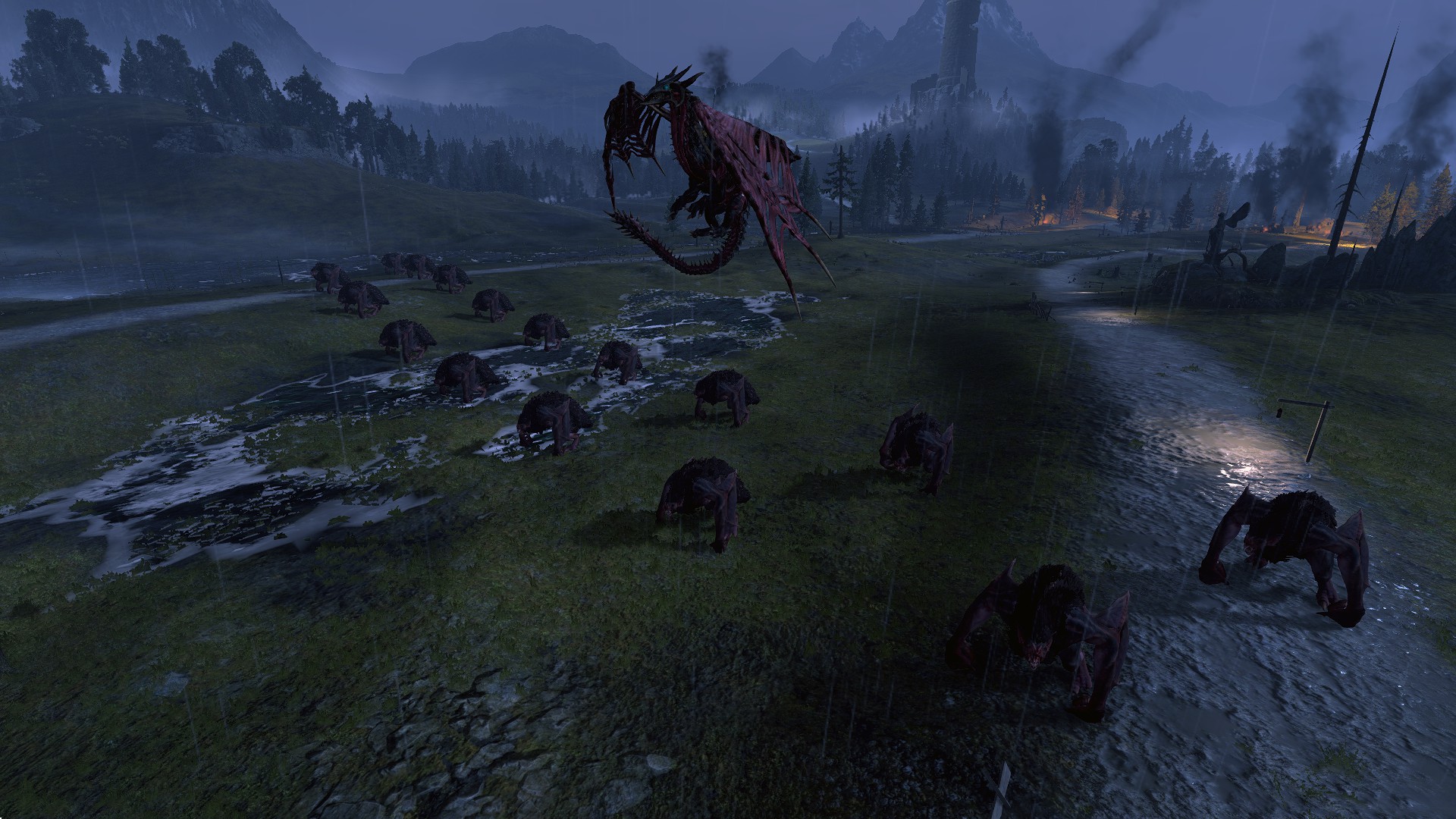 Vampire Counts are all about lords and heroes.

Almost every VC army is a stack of skeletons, backed up by a vampire lord to cast death spells and rack up thousands of kills.

If you’re tired of such a play-style, Varghulfs will be your go-to doomstack.

Great speed and offensive stats, with high armor-piercing damage and animations that knock entire units off their feet.

Regeneration and terror make them a constant nuisance.

Low leadership means they do tend to start to crumble quite easily, so make sure you’re summoning zombies to back them up against anti-large units, and have your lord nearby too. 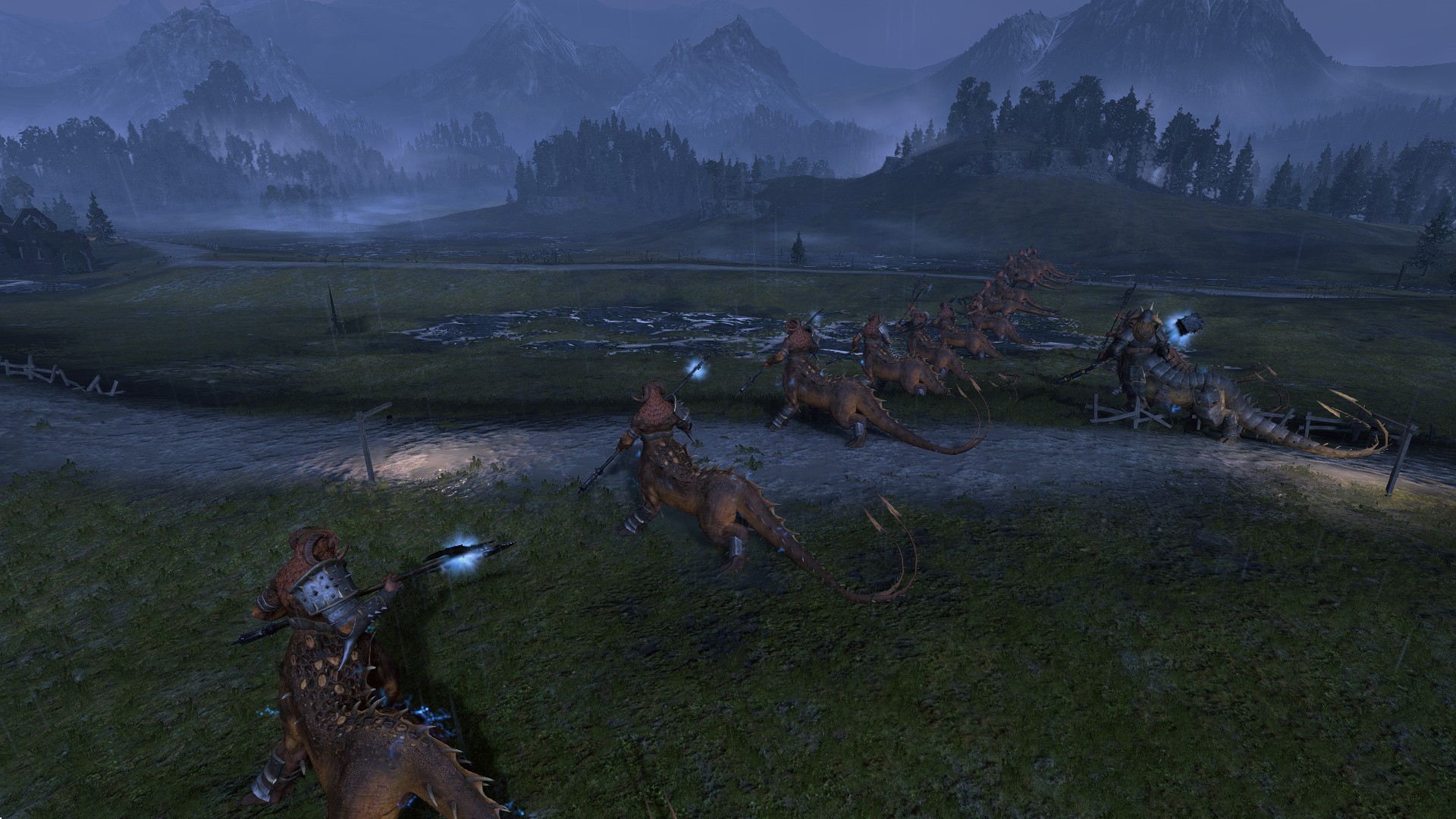 Dragon Ogre Shaggoths will consistently crush enemy units, smashing them with high aoe armor-piercing damage, and can also take down lords and heroes.

A full-stack is pretty much unbeatable in a straight-up fight, unless the AI specifically builds a full stack of armor-piercing anti-large units, and even then you could pull through with some half-decent micro play. 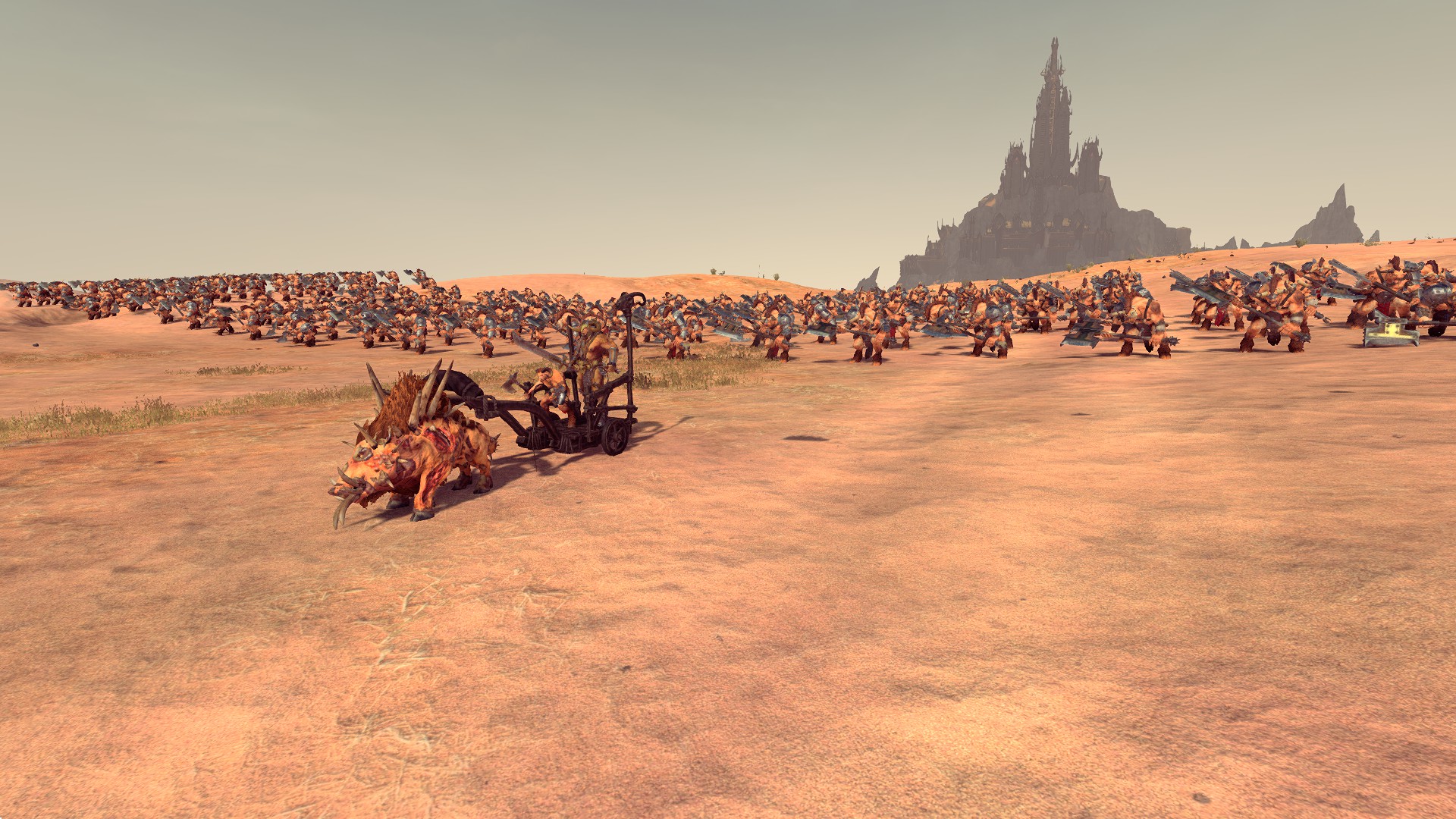 Not only are Minotaurs considered one of the best Beastmen units, they are your go-to army composition.

Every late-game Beastmen army should be full of Minotaurs, and the Great Weapons variant is the best by far.

Crazy high charge bonuses and base damages makes a charge from this unit quite devastating.

This particular variant has a built-in anti-large bonus, but less defensive prowess.

Still, with the relevant lord buffs, they become amazing and can run over multiple armies per battle. 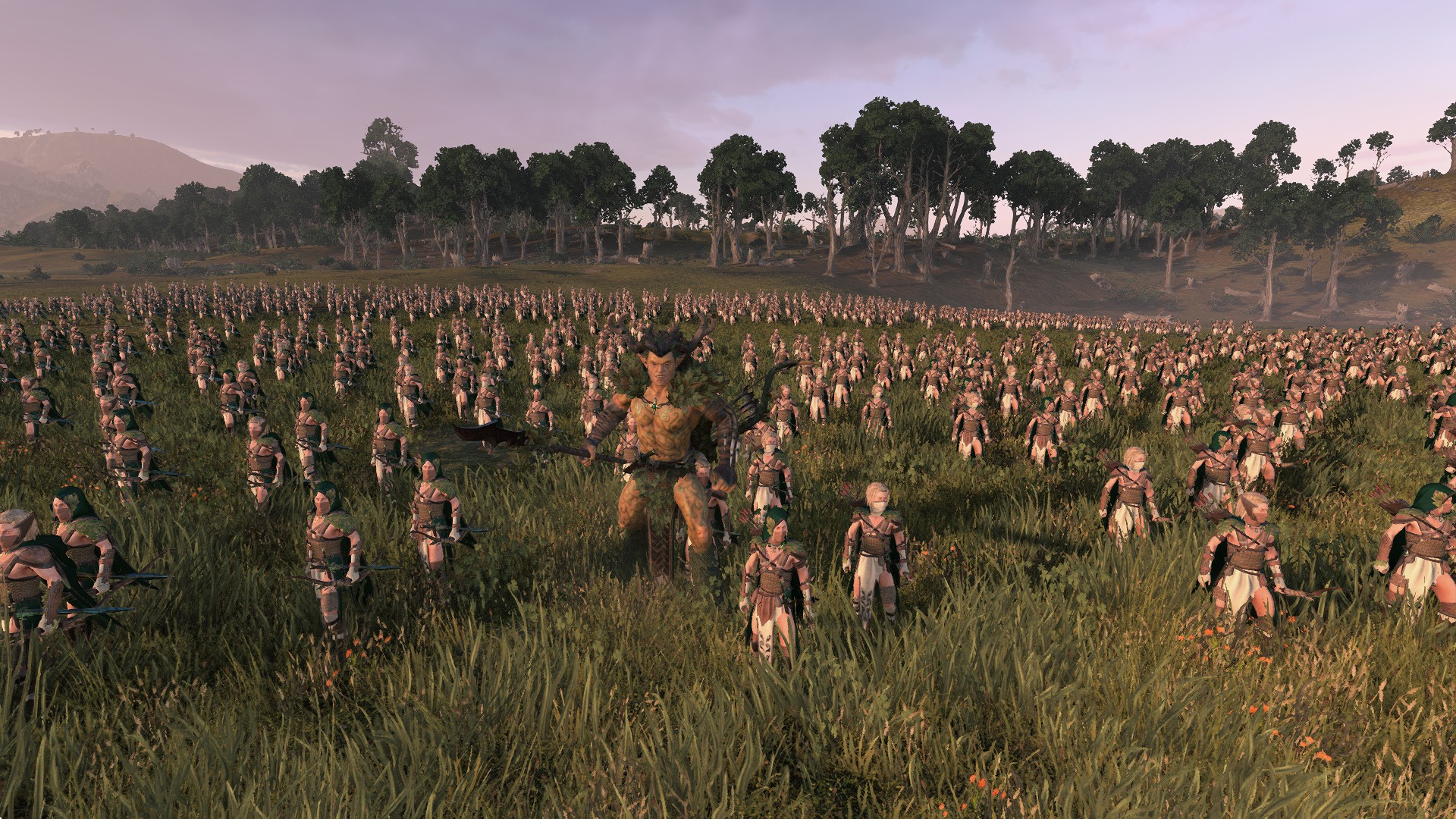 One of the best ranged units in the game, Waywatchers hit hard from range and can move whilst hidden.

Surprisingly good melee stats allow them to chew through low-tier infantry without breaking a sweat.

Use them to focus down the enemy ranged units, lord, heroes, and large entities. You don’t want to waste ammunition shooting their trash units.

Then send them into melee. One or two cavalry units will help a ton to finish off fleeing targets but they aren’t required. 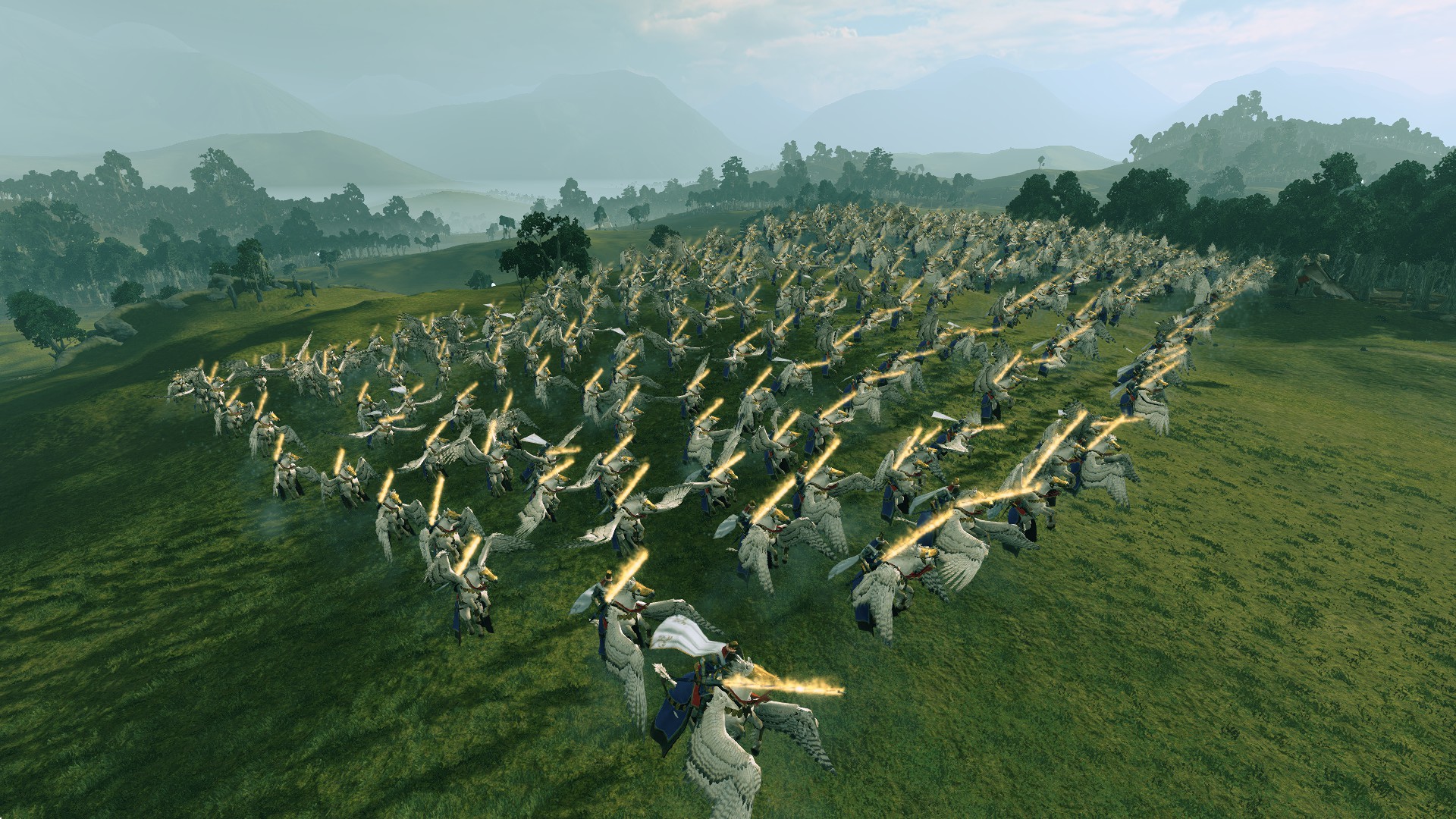 Pegasus Knights are faster than Hippogryph Knights, making them better suited for the strategy I’m about to explain.

You basically send all your flying units against one single unit of enemies, then fly away.

Once a single unit lands, they will stun the charged unit, then the next Pegasus Knight unit will charge and stun them further, etc.

This strategy “stun-locks” the charged unit, so you can deal damage without taking anything in return.

Keep doing it, unit by unit, and you can destroy whole armies without taking much damage.

No doubt the enemy ranged units will be firing on them, so use a Prophetess of Life to heal up your most injured units. 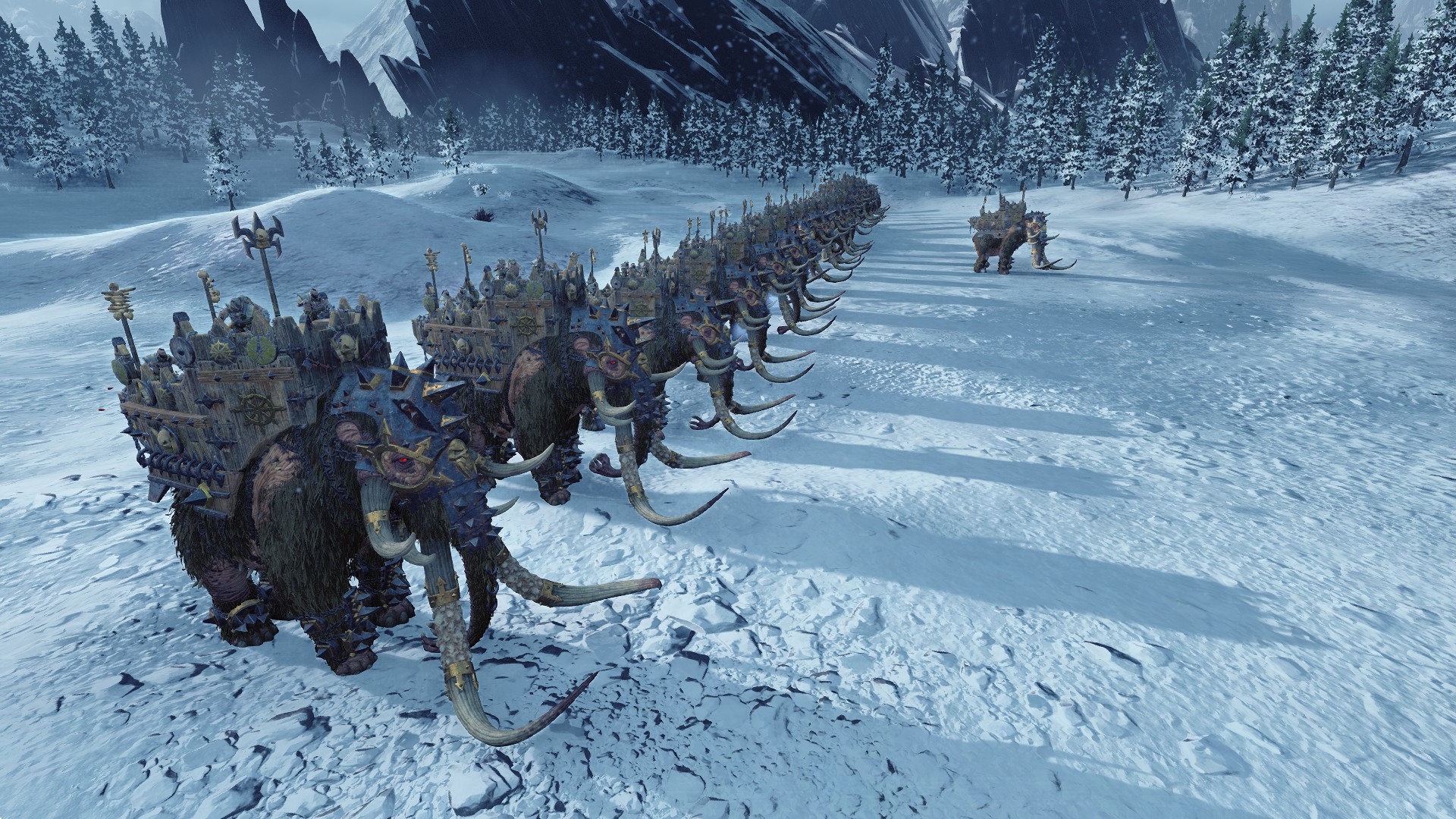 Each War Mammoth has over 13,000 health, and since the AI doesn’t know how to properly focus-fire down single entities, they survive for a long time.

Their riders also wield anti-large javelins, making War Mammoths one of the very few units to have bonuses vs both large and infantry!

Causing fear and terror will further bolster their ranking as the best Norsca unit in the game.

Every Norsca campaign should have a doomstack of War Mammoths leading the way! 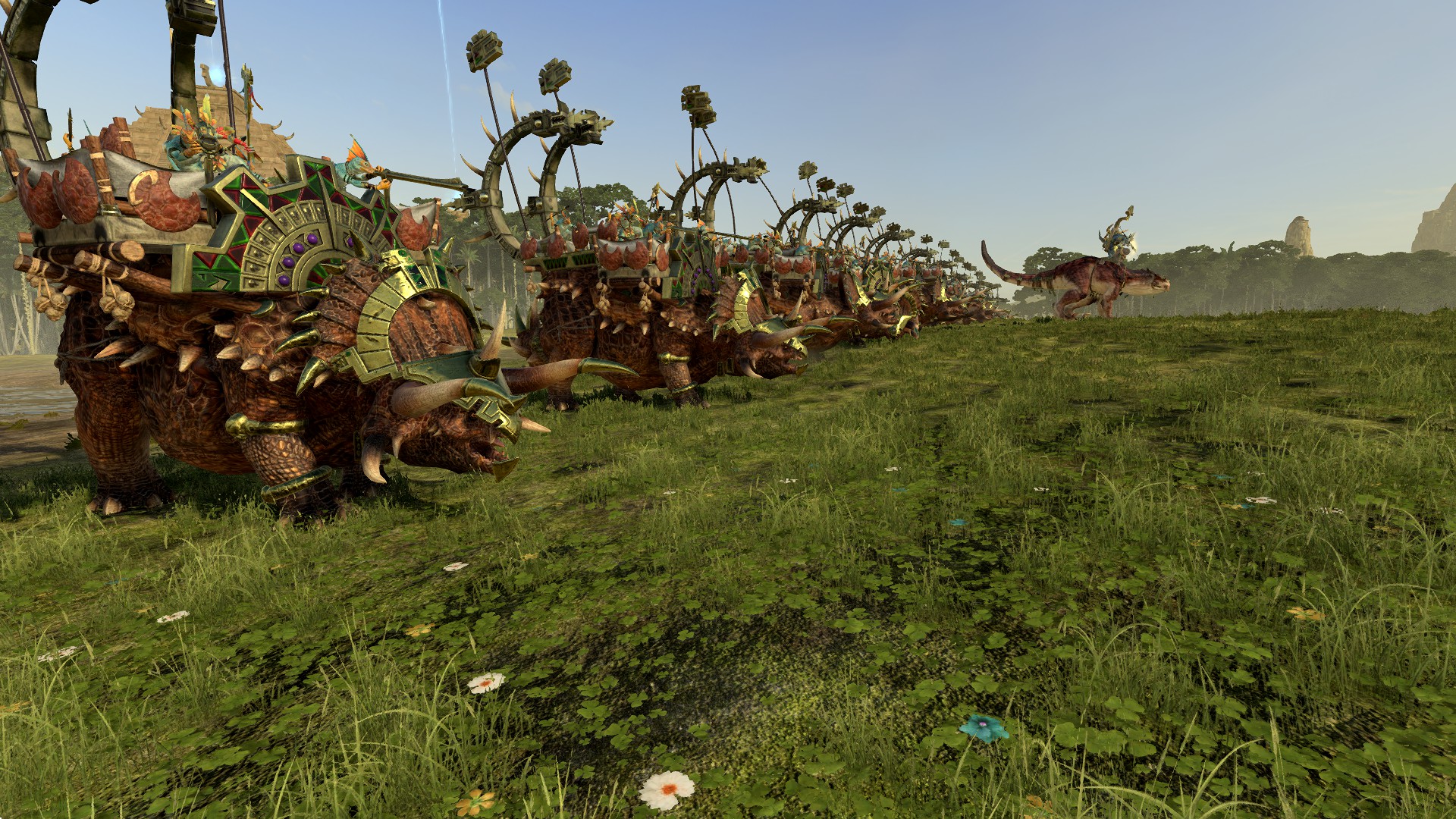 Normal Ancient Stegadons are also a great doomstack option, being much easier to obtain and keep track of.

Considered to be the strongest doomstack in the entire game, you need 19 Skink Chiefs with the Pompous trait.

Each hero with the trait will reduce enemy leadership in the region by 5, and this stacks.

So you can legit get enemies to immediately route from the battlefield.

It’s the cheesiest of all cheeses, though. So unless you’re finishing off a long, tedious campaign, give yourself at least a slight challenge! 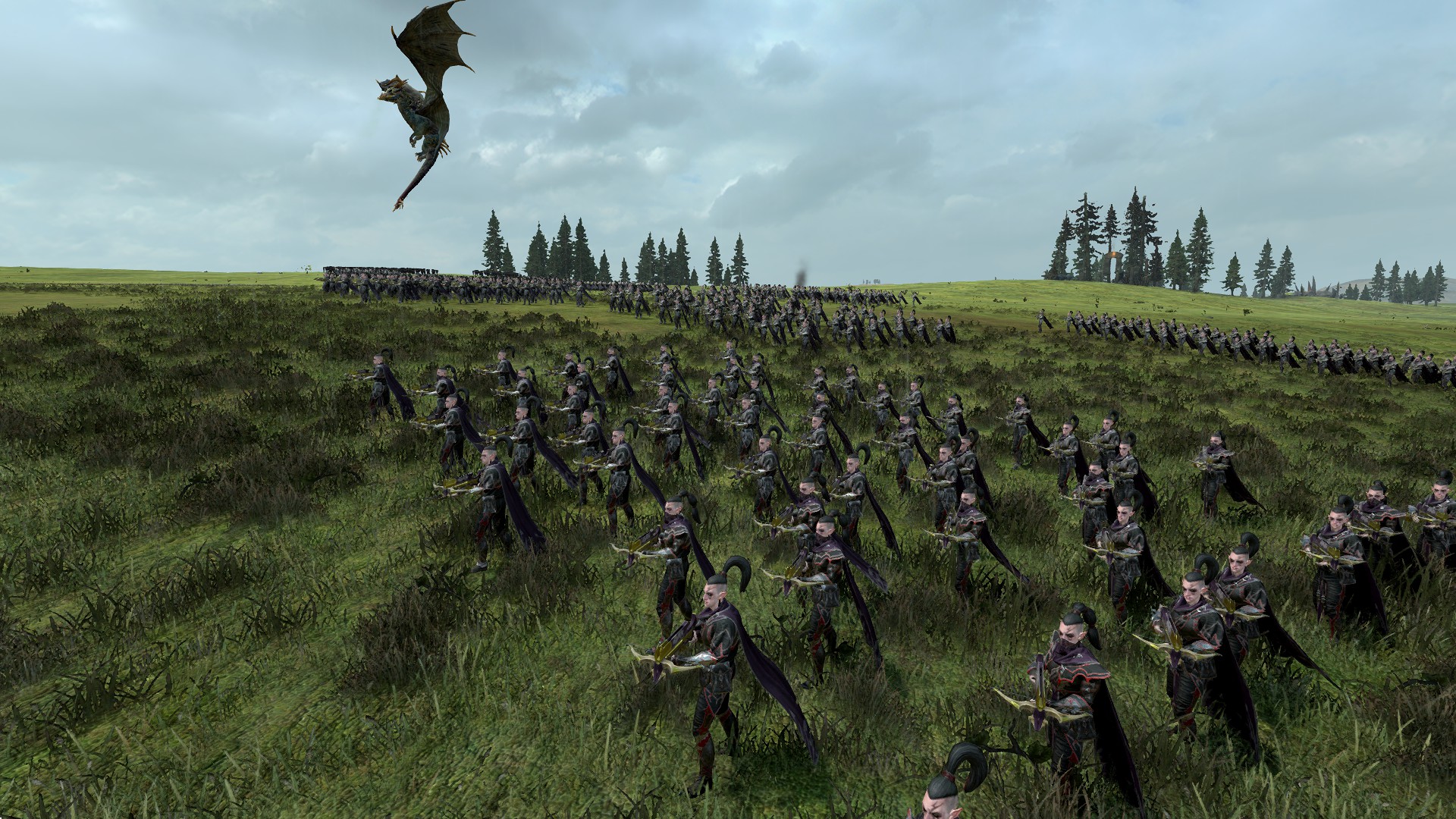 Taking 2 turns to recruit one unit, a full stack of Shades with Greatswords is terrifying to face.

They have excellent range and armor-piercing damage.

All shades also have the Vanguard Deployment trait, as well as stalk.

At the start of a battle, you can engage the enemy before they even know where your troops are.

The AI will often get confused and inefficiently manage their formation, giving your Shades more time to whittle down their army.

If they manage to engage in melee combat, the Shades’ default melee stat of 40, and high armor-piercing/anti-infantry damage will make short work of them.

Cavalry and artillery are your biggest threats but focusing them down with 2 or 3 Shades units will make short work of them. 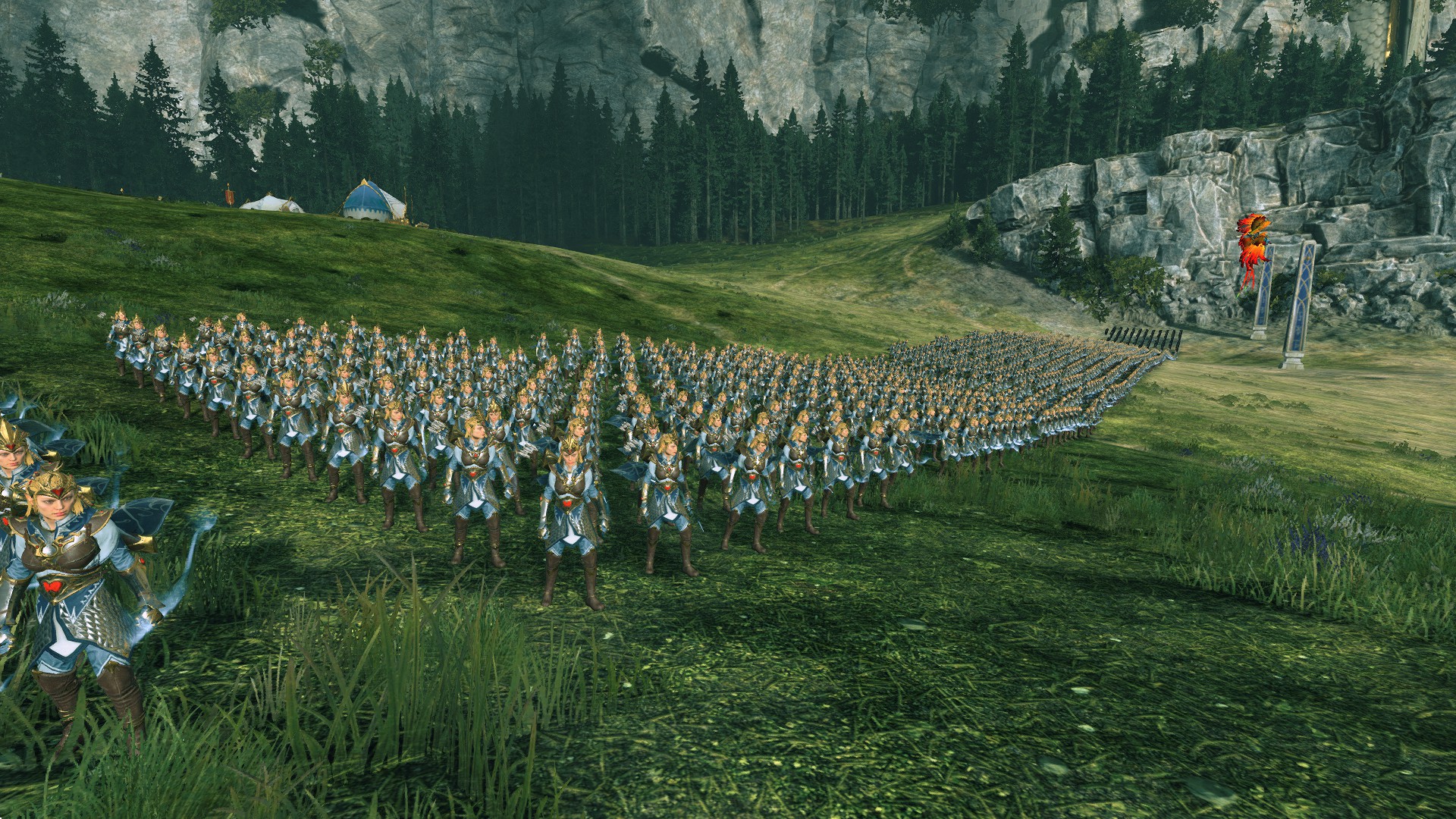 Considered the best archer unit in the entire game, Sisters of Averlorn are a menace of a doomstack, especially under a lord who can buff them.

Infantry, lords, large monsters, none of them are safe.

Since High Elves tend to have a strong economy, it’s entirely possible to field several of these doomstacks. 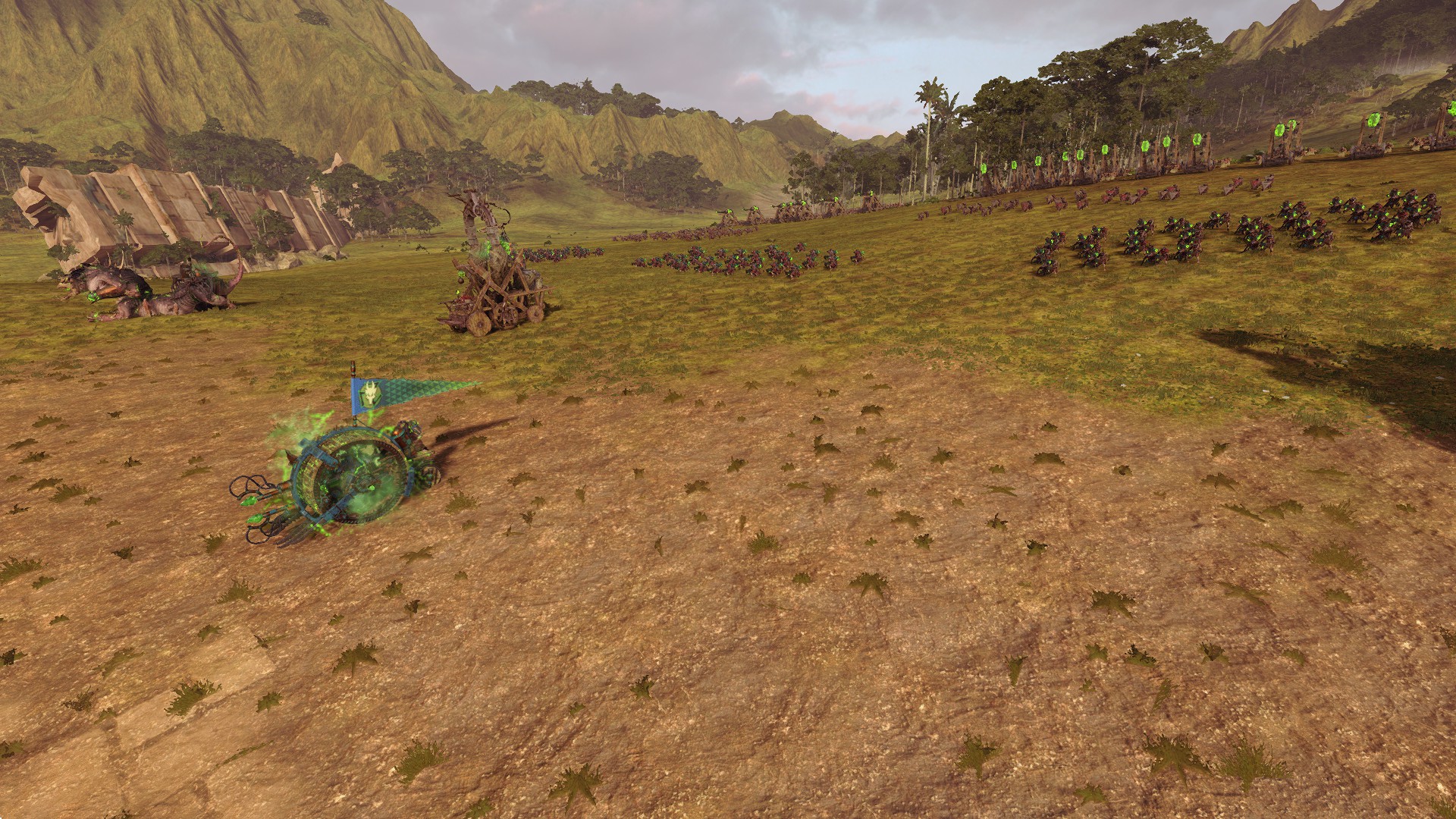 Skaven have so many different ranged units in their roster and as such, they’re considered the best ranged faction in the entire game.

All you need is 4-6 Doomwheels or Hell-Pit Abominations for a front-line and some Plague Priests, then fill the back-line with your best ranged units.

Plague Priests are used for summoning additional rat units to help keep the enemy at bay.

Some buffed up ranged units, preferably with chevrons, will decimate incoming enemy forces.

There is room for mortars and death globes too, depending on your play-style and which faction you’re facing. 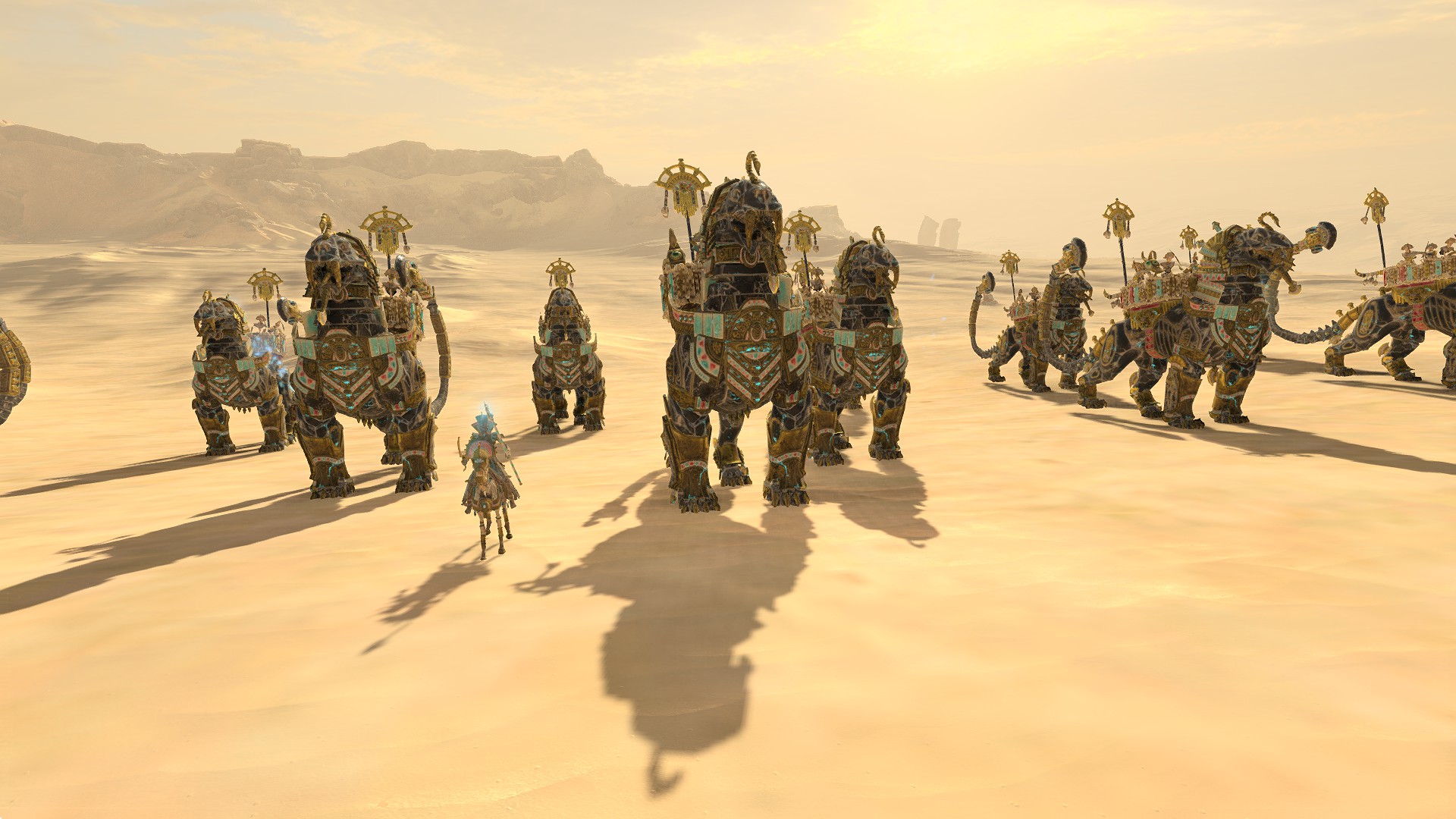 Tomb Kings don’t have a doomstack option to be honest, as the number of constructs they can recruit is limited to how many of their respective buildings you have.

If you do aim for a doomstack, Khemrian Warsphinxes are by far the best and easiest to get for the Tomb Kings.

Hierotitans are too slow, and will get decimated by armor-piercing ranged fire.

Necrosphinxes are great but struggle to get through masses of infantry, can often get stuck in an anti-large unit.

Khemrian Warsphinxes simply have great stats and incredible animations that allow them to maneuver through infantry easily. 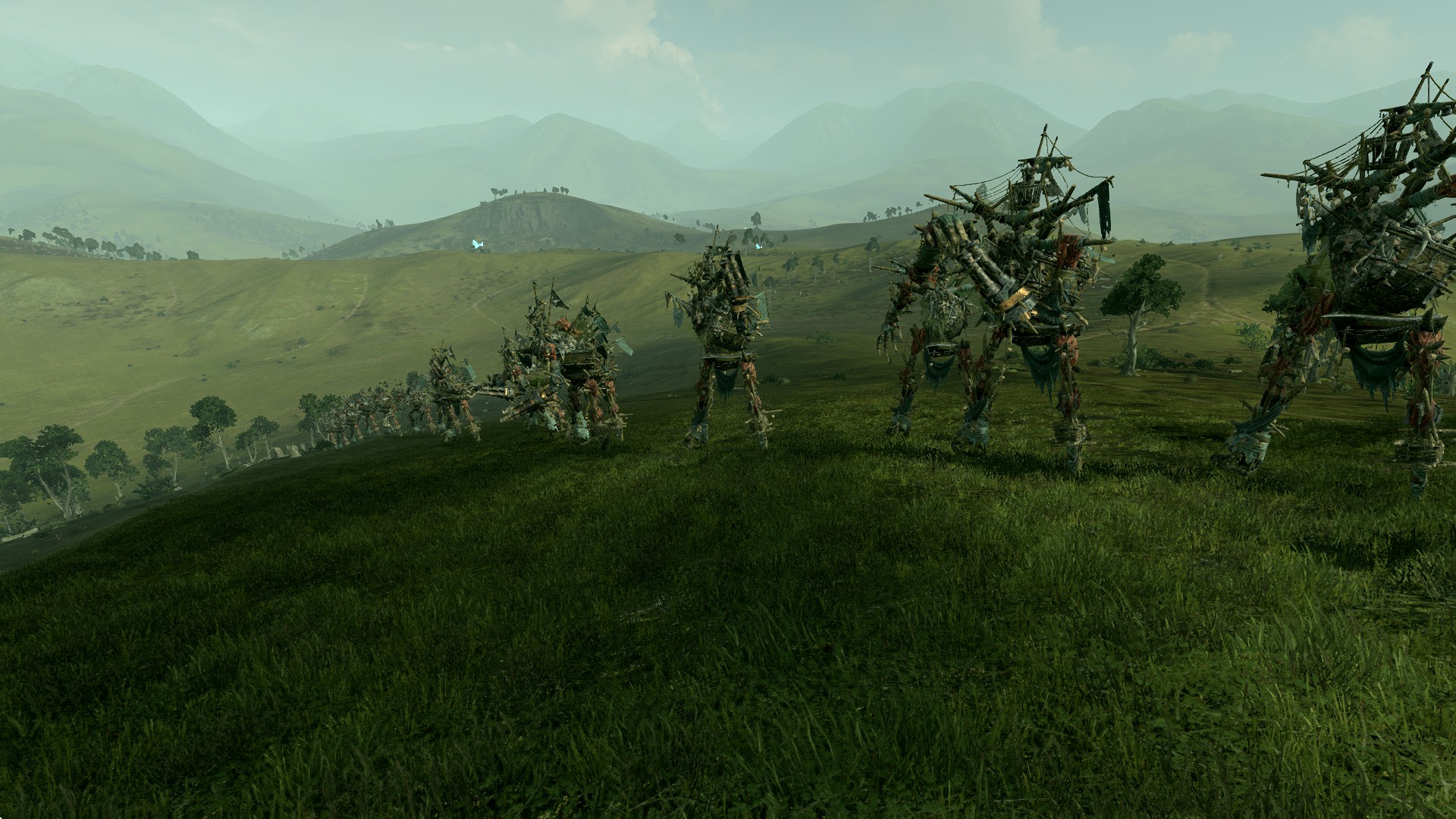 With Count Noctilus as your Lord, you can reduce the Necrofex’s Colossus doomstack to almost zero upkeep!

Along with all the buffs, they become insane artillery units who can also hold their own in melee.

While the enemy is approaching, use 5-6 Colossus’ to burst down individual units, the ones that are most likely to be a threat.

Enemy artillery is to be ignored, it won’t do anything. The exception here is Luminarks but again, just focus them down and they won’t be a problem.

This unit causes terror so any low-tier infantry you’ve ignored on the approach will be running away soon enough!

You might want to invest in some skills to increase ammunition, or add a few Gunnery Wights to the doomstack, in case you need to take on 2 or 3 armies at once.

Please do your research. Some of the information provided is flatout wrong. Just to give an example: Pompous Skink Chiefs reduce leadership by 4. Also Ancient Stegadons as a unit are inferior in utility and doomstack potential to regular Stegadons...