Released 3 years ago today (as of the writing of this post), Fallout Shelter has become a staple app for any smartphone user. The combination of beautiful, cartoony graphics with post-apocalyptic game-play is too awesome for most users to ignore.

You don’t even have to open your wallet to actually enjoy the game, Fallout Shelter offers lots of idle game-play while also giving you tons of opportunities to sit down and play for hours yourself.

Of course, the stronger your dwellers, the more successful you’ll be in the world. Equipping your dwellers with weapons/armor is a great way of improving their effectiveness but weapons are arguably the most important. Those radroach infestations and raider attacks can be devastating, it’s important to deal as much damage as possible to end these threats quickly.

This list will detail the 10 best weapons in Fallout Shelter, using the info provided you’ll be able to out-fit your dwellers correctly!

Note: I’ve only included 1 weapon of each type, as there are 5 missile launchers that are stronger than half of the list. This helps to provide a larger variety of weapons. 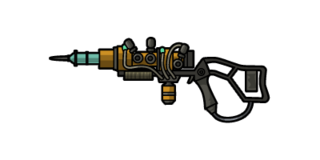 This Legendary variant of the Plasma Rifle boasts exceptional damage, dealing between 17 and 23 per hit. Any Plasma Rifle is good though, with the lowest dealing 17 damage per hit. Found quite rarely by dwellers in the wasteland, as well as in lunchboxes, keep your eyes wide open to make sure you don’t miss this weapon. 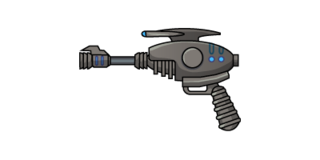 Once again, the Alien Blaster makes an appearance in yet another Fallout game. It’s a welcome appearance too, as the Destabilizer is particularly effective. Dealing just 1 more minimum damage than the previous entry, all Alien Blasters have a Legendary rarity so you likely won’t obtain one for a long, long time. 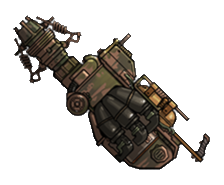 Sporting a rather bizarre appearance, the Technician’s Revenge is a variant of the Junk Jet, a powerful weapon that fires any kind of junk it can be loaded with. Added in the 1.4 update alongside a host of other items, this entry isn’t too hard to obtain so don’t give up on trying to find it. 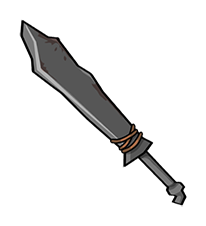 Almost an exact replica of the Bumper Sword from Fallout: New Vegas, the Relentless Raider Sword is a powerful melee weapon for slicing foes in half. One of only 2 Legendary melee weapons in the game, acquiring this entry will be difficult but if you manage to get your hands on it, you’ll have a weapon well worth using! 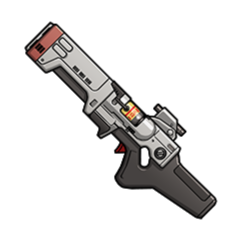 Institute weapons were added in the 1.4 update, the best one being Virgil’s Rifle which can deal between 19 and 26 damage. This amount is more than enough to cripple any foe, in fact all Institute Rifles are great. With 4 of the 6 variants being a Legendary rarity, don’t expect to see them too often. 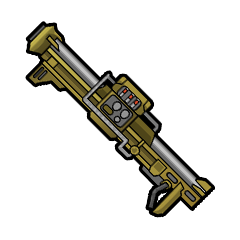 Of all missile launchers in the game, the Miss Launcher variant boasts the highest damage of them all. Explosive weapons like this deal damage to all enemies in the current area, making them perfect for clearing out swatches of Molerats or Radroaches. As expected, acquiring one of these launchers is very difficult but understandably so, having 3 or 4 dwellers equipped with one each would be way too overpowered! 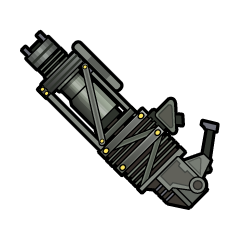 Gatling Lasers deal insane damage in Fallout Shelter, with 21 being the minimum of the lowest variant. Vengeance is the most powerful type of Gatling Laser you can get, dealing between 21 and 26 damage. In terms of aesthetics, Gatling Lasers are arguably the coolest looking weapons in the game as well. 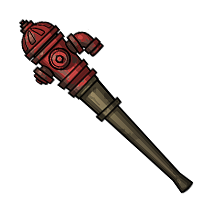 Despite how silly it looks, the Fire Hydrant Bat has no other rival in terms of melee weapons. Capable of hitting for a higher damage than any other weapon in the game, this melee weapon hits for between 19 and 31 damage. Reliability is a bit of an issue which severely affects this entry’s ranking on this list. Players have reported issues in combat, with dwellers using the Fire Hydrant Bat ignoring enemies who are already being shot. 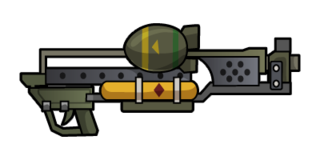 Any weapon that fires mini-nukes deserves to be at least in the top 3 of this list. The MIRV is no exception, being a Fat Man variant with its own explosion animation. Completely engulfing the area in a nuclear explosion, the MIRV deals incredibly high damage to all nearby enemies.

While missile launchers are fine for dealing with lower tier threats, the MIRV can decimate entire groups of Raiders or higher enemies. 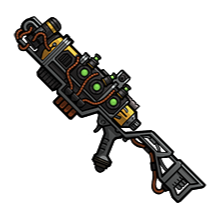 Ignoring AoE or maximum damage, the Dragon’s Maw is the most consistent, high damaging weapon in Fallout Shelter. Dishing out the highest sustained damage out of all other weapons, sending 2 dwellers equipped with Dragon’s Maws out with another utilising an AoE damaging launcher is extremely effective!

The problem is, the heavy explosive weapons dish out the damage equally, which means less damage to each enemy in big groups, which means each enemy can last longer and dish out more damage overall.

I got the destabilized out of my first crate cool

I have a weapon called Fat Man, i also have the Miss Launcher which is better?

This was very Help full