Cannons are your bread and butter in the Sea of Thieves, firing solid cannonballs to smash holes into ships or demolish skeletons.

You can’t acquire different types of cannons, only different appearances.

Due to this, players seek out the coolest cannon skins, to give their ship a renowned or intimidating appearance.

Many cool skins can be acquired from the get-go, requiring only a bit of gold.

Most of the best skins take time and effort to unlock.

Note: I’ve left out cannon skins that can only be purchased with real money, so anyone can acquire the following skins without opening their wallet!

Also left out time-limited skins, to see them, look out for the Rarest Cannon Skins coming soon! 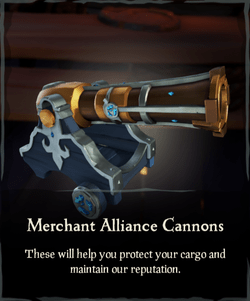 Once you’ve reached the requirements, you can purchase this cannon skin from any Merchant Alliance vendor.

Thing is, most players loathe the Merchant Alliance. Their voyages are simply boring, telling you to pick up some cargo and deliver it somewhere else.

For this reason, players don’t even bother to level their Merchant Alliance grade, unless they see it as a quick way of obtaining the Pirate Legend status. 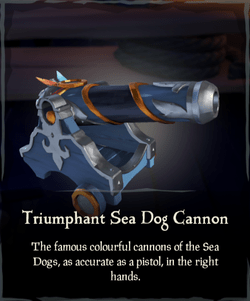 Very hard to get, requiring a ton of time in Arena. Glorious Sea Dog Cannons cost 69,550 Gold and are available after reaching a Sea Dog level of 40.

Getting level 40 with Sea Dogs is difficult enough, even first place wins don’t provide many emissary points after around level 30.

However, if you do get this cannon skin, you’ll have proved yourself as a competent and experienced pvp player! 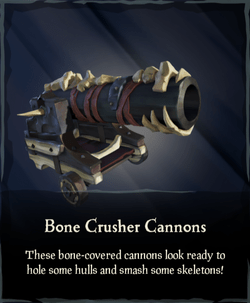 One of the easier cannon skins to get, as skeleton ships are frequently encountered on your adventures.

Not only do you get the cannon skin, but you’ll also be provided with a full Bone Crusher set upon completion of the commendation, for your pirate.

To get the rest of the Bone Crusher ship set, you’ll need to wait for the next Cursed Sails event.

Bone Crusher Cannons are perfectly fine to use by themselves, though, as their appearance fits many different ship designs and still looks awesome. 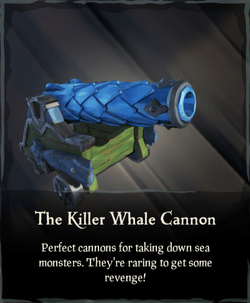 Levelling up with Hunter’s Call requires fishing…a lot of it!

Meat and Mermaid Gems can also be sold but fishing is by far the easiest method.

You see, while fishing you have the chance to encounter treasures like boots, hats and trophy fish.

Most players stick to Gold Hoarder/Order of Souls/Reaper for their emissaries. You’ll seldom see this epic cannon on the Sea of Thieves. 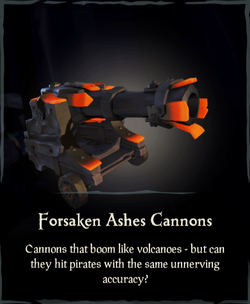 Sporting a volcanic, broken appearance, the Forsaken Ashes Cannons skin is one of my personal favorites.

There’s something so satisfying about decking your ship with volcanic cosmetics.

With no requirements to purchase, you can get this cannon skin early on.

You will need more volcanic-based cosmetics, or other dark-themed ones like Inky Kraken, for it to really fit in. 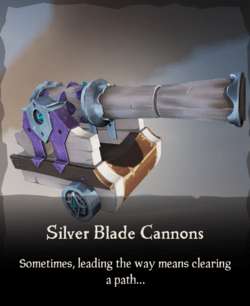 Requirement: Be an Insider and play for at least an hour a week for 30 weeks

In terms of cannon skins available for unlocking, Silver Blade Cannons require arguably the most dedication.

It’s worth it, as this cannon skin fits snuggly into a ton of different ship cosmetics.

Players will often comment on where/how you got it, while those who recognise them will be full of respect. 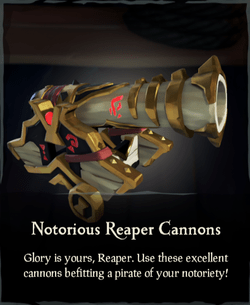 The highest cannon skin offered by the Reaper’s Bones, one with a particularly intimidating appearance.

Notorious Reaper Cannons offer a striking appearance and aren’t too difficult to get.

Levelling up your Reaper’s Bones is done by selling Reaper’s Chests, Reaper’s Bounty, Gifts or emissary flags from sunken ships.

No doubt you’ve fallen to a Reaper ship before, it’s well worth investing in it yourself!

3. Cannons of the Ashen Dragon 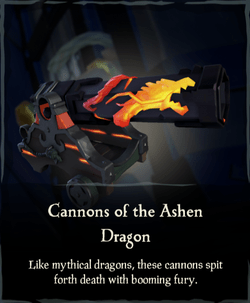 Ashen Dragon is one of the coolest sets you can get in the entire game, yet also one of the most difficult.

Due to this, acquiring specific parts can be a huge ask.

I’ve personally been searching for this cannon skin for many hours, having gone through several dozen Ashen Chests! 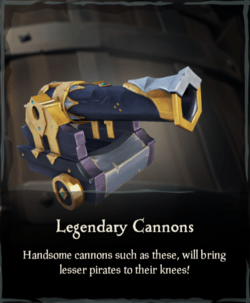 Becoming a Pirate Legend is no easy feat. Players expect it to take at least 250 hours of gameplay.

I’m nearly there after 100 hours, spending much of my time in search of competent Galleon crews.

Even after reaching Pirate Legend, 500 skeleton ships is a remarkably high requirement.

Equivalent to firing at least 7500 cannonballs & collecting at least 4000 pieces of treasure.

But, at the end of it all, you’ll have the Legendary Cannons skin.

Very unique and fits well with the Legendary Sails & Hull. 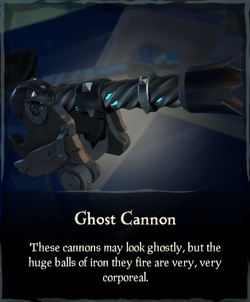 Being the most unique and best looking cannon skin in the game comes at a price.

Unlocking the commendations by delivering those 100 pieces of treasure is extremely grueling.

Athena’s quests have a low chance of providing even one chalice or gilded relic.

Makes the unlock even more worth it, as you’ll have a cannon skin that few people will recognise, but all will respect.