The toon archetype is arguably the most unique out of any in the game, they bring powerful effects to the table while having huge drawbacks. Toon World is a necessity and if it gets destroyed, say bye to the toon monsters on the field, it also costs 1000 life points to activate. Due to these problems, toons are rarely used as players prefer to go for archetypes with insanely fast summoning and big boss monsters. I fully believe the toon archetype is worth using though, not competitively of course but they’re really fun to use.

If you’re thinking of making a deck based around toon monsters, check out the top 10 best toon monsters in Yugioh 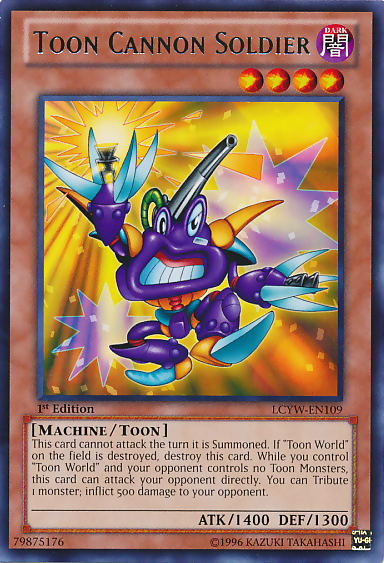 The first few entries on this list will be a bit underwhelming, toons don’t have many cards to choose from. The Cannon Soldier variant is fairly bad, there’s very few situations where you’d make use of its effect. It is better than any other toon monster that isn’t on this list though, which is why it gets the 10th spot. 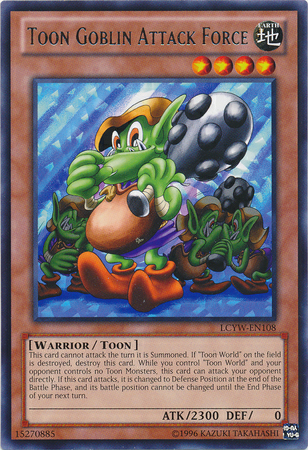 If you summon this toon monster, it’s likely to survive until the next turn as it has 2300 ATK. You’re then free to attempt to attack directly, dealing heavy damage if the attack goes through. It’ll likely be destroyed next turn though as it has 0 DEF but if you can get a direct attack or two with a few Toon Goblin Attack Forces, you’ll inflict quite a bit of damage. 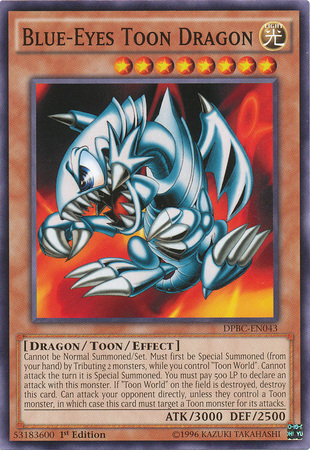 Such a pity this card was created when toon monsters were first released, it has the same disadvantages as the old cards, such as paying 500 LP to attack. Imagine if it had an effect similar to the newer toon monsters, Blue-Eyes Toon Dragon would probably make it into the top 3 if that was the case. Unfortunately, this monster has too many drawbacks to provide an effective beater for your toon deck, so I wouldn’t advise having more than 1 in your deck. 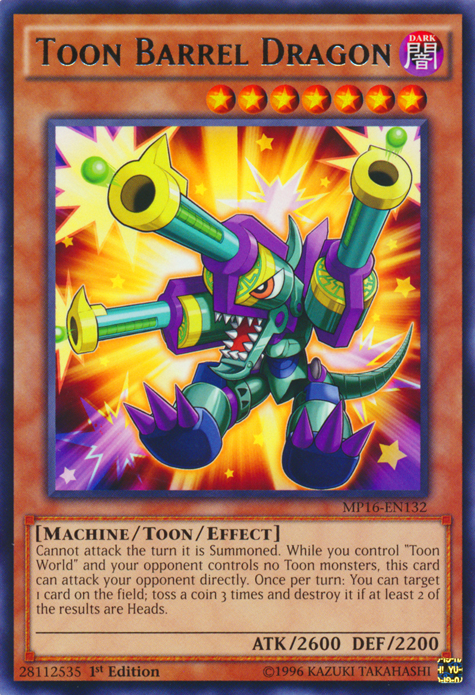 Barrel Dragon was an extremely epic card, fabled throughout all Yugioh fans for its power and rarity. Nowadays, it’s no more than a piece of nostalgia, I was surprised to see a toon variant be released. It has the exact same coin-flipping effect as the normal Barrel Dragon but it’s much easier to summon, you’ll find Toon Barrel Dragon can serve you well in any toon deck. 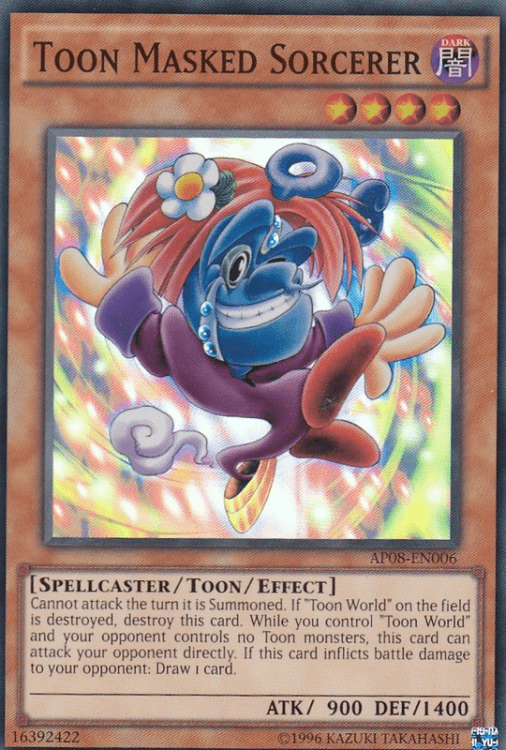 Perhaps the most ponderous of toon cards to be released, Masked Sorcerer was never a well-loved card but it got a toon variant anyway. This card has low ATK/DEF stats but it does benefit from a cool effect, as it allows you to draw 1 card whenever you inflict battle damage to your opponent. This combos extremely well with Toon Masked Sorcerer’s direct attacking abilities! 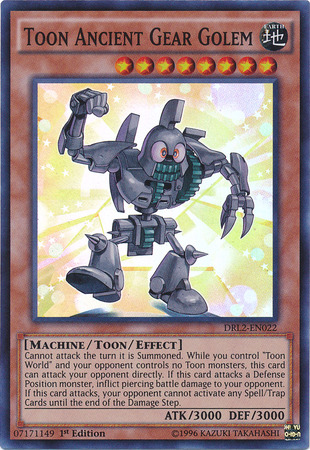 Toon Ancient Gear Golem is ridiculously humorous, those eyes make it hilarious. The non-toon variant is exceptionally powerful, capable of winning games on its own, so a toon variant should provide a massive boost to any toon deck. 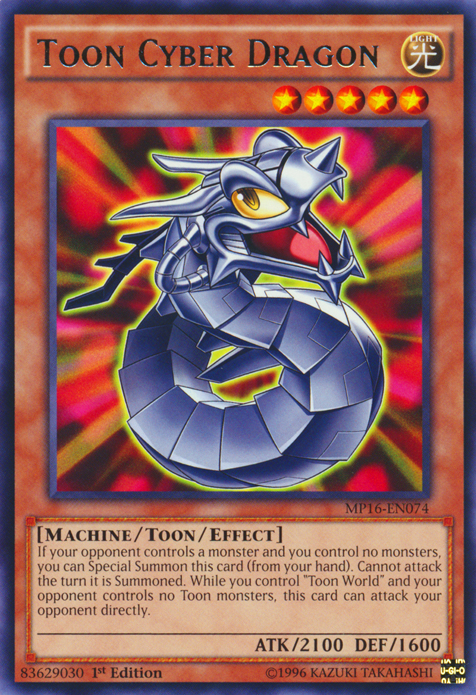 After all these years, Cyber Dragon is still a good card so Toon Cyber Dragon is amazing in a toon deck. Having the option to special summon this level 5 monster is crucial, as you get to keep your normal summon too. You’ll have a variety of options available, as you can use this monster to inflict damage or use as a tribute/synchro/xyz material. Flexibility is so useful in any deck, toons especially need cards like this. 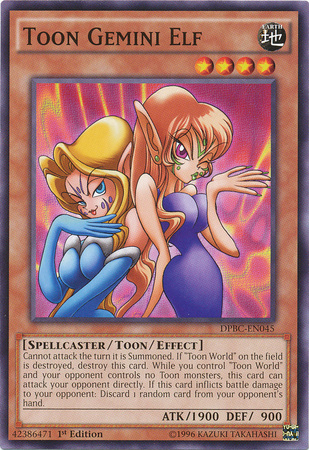 Toon Gemini Elf should be the bread & butter of your toon deck. We all remember how annoying it was to battle the base variant of Gemini Elf, so imagine a toon version that can discard cards from your hand..

Although it can’t attack the turn its summoned, you’ll be free to attack directly and discard one of your opponent’s cards, even more if you have more copies of this card on the field! 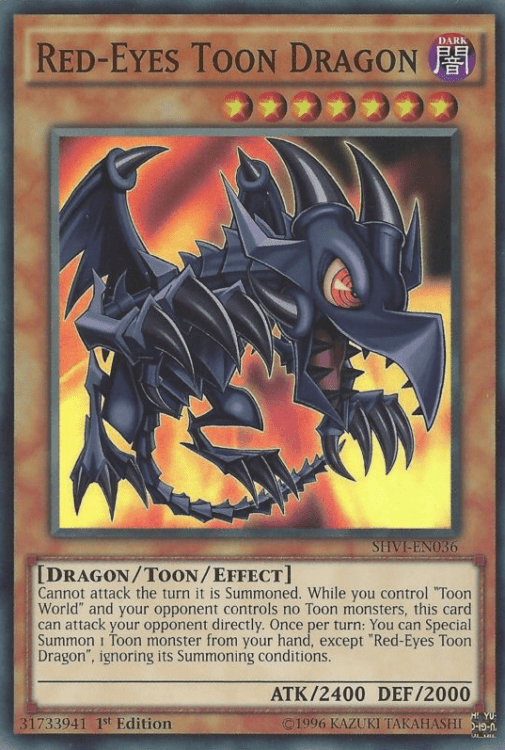 This backs up what I said about Blue-Eyes Toon Dragon even more, the Red-Eyes Toon Dragon card is far, far superior. It does require two tributes to summon if you can’t find a way to special summon it which, for a monster with just 2400 ATK, might seem a bit excessive. When you get it on the field though, the game will be in your grasp as you’ll have the ability to summon any toon monster from your hand, bypassing any summoning limitations. 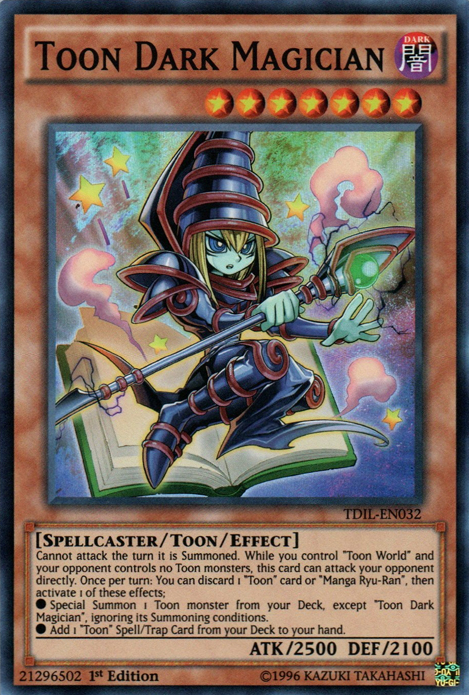 What a card this is, you’d think the best toon monster would be related to Maximillion Pegasus or something but no, Dark Magician takes that spot. If you use the previous entry, you can summon this monster easily and discard a card to use one of its effect. Such a combo is quite outrageous, as you can summon any toon monster from your deck or add any toon spell/trap card from your deck to your hand. Of course, you won’t be able to attack in the same turn but that’s justified, toon decks would be absurdly OP if that wasn’t the case!

No Toon Summon Skull (seen on season 1 yugi vs pegasus and pyramid of light movie) or Toon Dark Magician Girl(seen on season 4 kaiba vs alaster[disguised as pegasus]). most of these appeared on manga,pyramid of light(toon gemini elf and blue eyes toon dragon) and the series mostly Yugioh Duel Monsters & Yugioh GX Season 2(toon ancient gear golem[crowler and bonaparte vs pegasus]). some don't appear at all just released in the card packs.