The gemini sub-type is arguably the most unique in all of Yugioh. They’re classed as normal monsters while on the field or in the graveyard and can become effect monsters if normal summoned again. Cards like this are awesome as they have built-in drawbacks, allocating more power budget to their effects and ATK/DEF stats. Unfortunately, Konami hasn’t shown gemini monsters much love in recent years, very few have been released. The monsters that do exist are fairly decent, with powerful effects that synergise really well with gemini support cards.

This list will take a look at the 10 best Gemini monsters in Yugioh. Rankings are dependent on each card’s general viability, rather than an archetype specific card like Meteor Dragon Red-Eyes Impact. 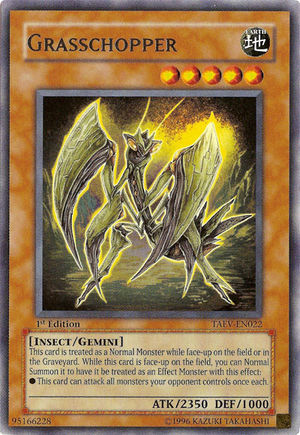 While Grasschopper can be a pain to summon, it’ll undoubtedly prove useful as it shreds through your opponent’s monsters. Having the ability to attack all of your opponent’s monsters is game-winning in the right situations. The low ATK stat and high time required to make use of this monster is its downfall and the reason it’s only 10th place on the list! 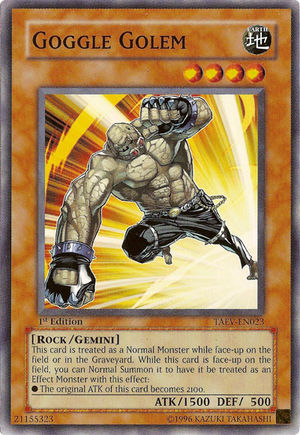 Sometimes it’s nice to have a monster like Goggle Golem, a level 4 monster with 2100 ATK is actually quite insane. I suggest making use of this monster, even a single copy can widen your gemini deck’s options. It’ll be particularly potent against defensive and/or stall decks, as they’ll have trouble dealing with such an easily summonable level 4 beater. 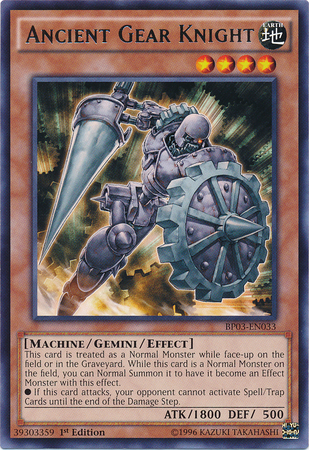 While it’s not seen in Ancient Gear decks anymore, this monster is actually an awesome choice for any gemini decks. Mostly utilised as a way of getting through your opponent’s spells/traps, it’ll serve as a decent level 4 beater that can penetrate through sticky situations. 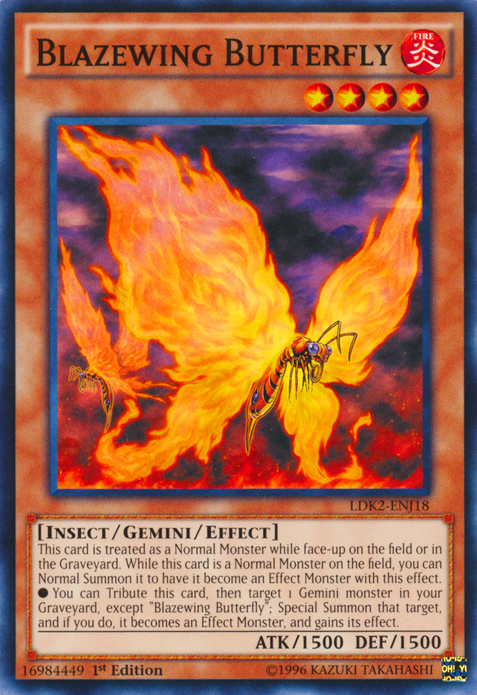 Blazewing Butterfly will allow you to tribute it in return of any gemini monster in your graveyard. That’s right, even a level 8 gemini monster can be special summoned with this effect. I’d definitely recommend adding a copy or two of this card to your gemini deck, the effect isn’t limited to one per turn so there’s a plethora of combos available. 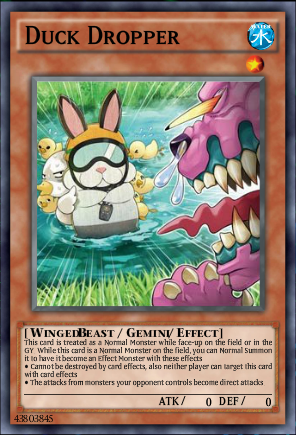 I’m kind of cheating with this entry, Duck Dropper isn’t actually released in English yet. When it does hit the shelves of the Western world, players will make use of Duck Dropper as a stalling cards. Once it has its effect, it’s pretty much invulnerable as all attacks from opponent’s monsters become direct attacks and it can’t be destroyed or targeted by card effects. Combine Duck Dropper with Spirit Barrier and your opponent will never want to face you again. 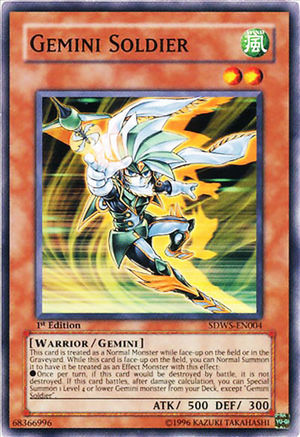 The bread & butter of any gemini deck, Gemini Soldier can easily pull monsters onto the field from the deck. While you might take a fair bit of damage to your life points in the process, it’s worth it to choose any level 4 or lower gemini monster in your deck. A slight disadvantage of Gemini Soldier is the fact the monster is special summoned from the deck in the battle phase. This can give your opponent the ability to attack the special summoned monster if needed. 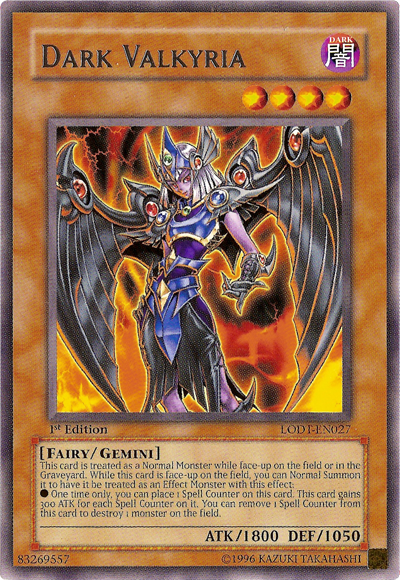 Upon gaining its effect, you’ll have a 2100 ATK level 4 monster that can destroy a card on the field, at the cost of 300 ATK. Dark Valkyria is incredible and should be in any gemini deck. You can only place one spell counter on it per turn via its own effect but you can remove as many as you want in one turn for its secondary effect. A single card that can serve to deal damage or destroy cards on the field is hugely useful. 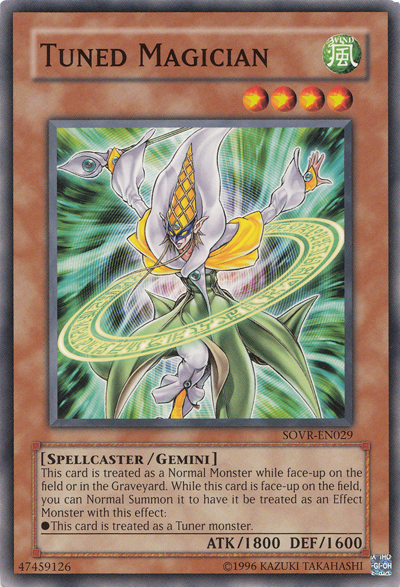 All decks need some method of getting out monsters from the extra deck, Tuned Magician is the best choice for a gemini deck. Support cards for geminis are effective at getting out gemini monsters so procuring Tuned Magician’s services shouldn’t be a challenge. Then you’ll have a level 4 tuner monster once it gets its effect, which opens a can of worms as to what you can summon! 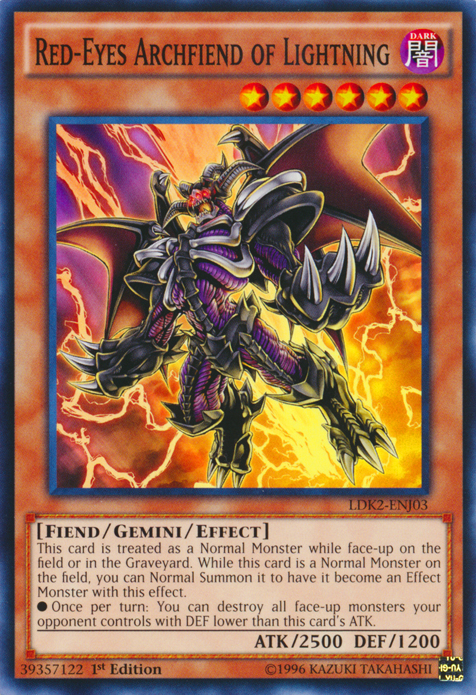 One of the more recently released gemini monsters, this upgraded Summoned Skull is one of the best gemini monsters in the game. The ATK stat of 2500 is nothing to be sniffed at and its effect can flip the course of a game upside down. Not all big monsters have 2500 or more DEF so its definitely capable of causing major damage. Red-Eyes Archfiend of Lightning looks awesome too! 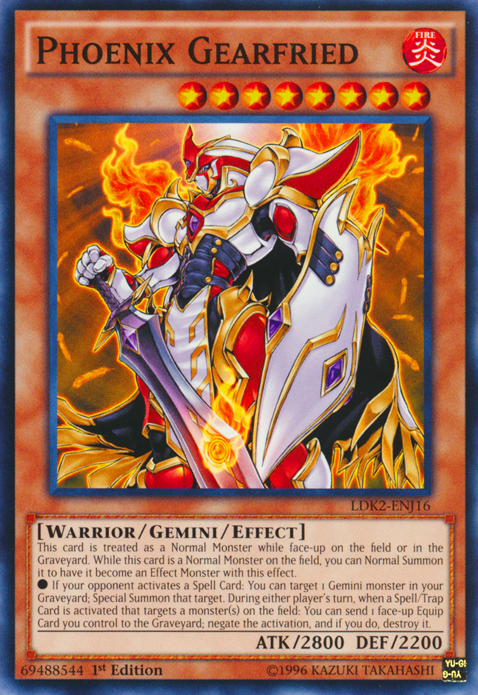 Just edging ahead of the previous entry is Phoenix Gearfried, the best and most epic gemini monster in the game. Although it’s level 7 and doesn’t have the greatest ATK/DEF stats, it bring so much to the table. Being able to summon any gemini monster from your graveyard, every time your opponent activates a spell card is ludicrous. Entry number 7, Blazewing Butterfly, makes summoning this monster a breeze. When you get this monster out on the field, the duel is pretty much over..