Riot has made aesthetic customisation a priority in recent years, offering new ways to show off the resources you’ve acquired. These new features come in the form of emotes, new icons and of course, new skins. Each summoner has had an icon since the start of League of Legends, you can only equip 1 at a time yet there’s hundreds available to choose from. So with such a wide variety of options, you should be using the rarest icon possible to really show yourself off.

Icons on this list are exceedingly rare, I genuinely mean you haven’t even heard of them before and if you have, you’ve never seen them in game!

Arguably the easiest to obtain on this list by far, yet so few will have actually got their hands on this icon. It was given out at the end of the old honor system, to players who had obtained a large amount of “Helpful” honors. Other honor icon types would have been distributed in the masses, very few players actually honored players for helping them.

Players who either owned a legacy rune (What are legacy runes?) or spent a insane 125k IP on runes throughout the years were awarded this icon during the rune/mastery overhaul. Legacy runes were available during the Harrowing events in 2010 and 2011 respectively. Lets be honest here, very few players spent that much IP on runes too!

You can only obtain this icon by purchasing the Radiant Wukong Figure via the Riot store. You’ll then get a digital code to unlock this icon in-game. While that sounds easy, who would actually buy a Radiant Wukong figure? Wukong himself is a deeply unpopular champion, create a figure based on his best skin and you’ll have very low buyers!

7. Rengar Plush in the Jungle

Isn’t this the cutest icon you’ve ever seen? Even a plushie Rengar will devour your face if given the chance, though. Acquire this icon by purchasing the Rengar collectable plush on the Riot merch store. 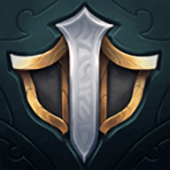 If you’ve witnessed this icon in action, consider yourself very lucky as its rarity is obscene. Not only do you have to purchase a limited edition skin to get it, it’s so boring that players won’t even bother using it. For how rare it is, you’d think it’d have a bit more flair.

Obtainable during the Sugar Rush event, held between August and September of 2014, is the Hextech Hard Candy icon. You had to spend some $$$ and send a gift to a friend to unlock this sweet icon, something I’m sure many players did but 4 years later, it’ll be nowhere to be seen!

Anyone who loved bad gamemodes with absolutely no balance will have this skin. All jokes aside, Riot wanted to do something nice for those Dominion-only players when the gamemode was formally shut down. Their gift to those players was a limited edition, never-to-be-released again Dominion icon. Only players with 100 pvp wins or more were given this icon, which I can only guess is very, very low!

Challenger tier was introduced as a sort of gateway between Diamond Players and pro players. Sure, Master tier also did that but Challenger tier is a whole other kettle of fish. Upon finishing the season of 2014 in challenger tier 3, you’d be granted this icon as a reward. Many pro players you see nowadays will own this icon but apart from that, no one else will.

As you likely guessed by the name, this icon was given to players who participated in the beta. Well I say participated but they also had to be within the top 500 players in their region!

I’ll be surprised if more than 50 were still around today, making this icon easily one of the rarest in the entire game.

Absolutely impossible to both see and acquire, if there’s an icon in the game you’ll never lay your eyes on, it’s this one. The top 100 players in each region were gifted this icon in the beta stage of the game, back when the population was much, much lower. Looking ahead, I’ll let you try and guess how many accounts holding this icon are still active. I’d honestly guess you could count on one hand!

Not going to do the season 2 harrowing icon that yoou had to spend $100 during the 3 week event to get?

if its easy to get its not rare thats not how it works. if i can buy it and have it right now then its not rare at all, who cares if its got nobody buying it, its not hard to get

Sorry but you left out season three triple diamond.