Trap cards aren’t as important nowadays as they used to be, having to wait a turn between drawing and playing a card is a bit too much for a lot of players. You need to make plays quickly, establish dominance and earn your win in a few turns. Despite this, traps do still have their place, counter traps even more so. Only counter traps can be chained to counter trap cards, making them great choices for shutting down your opponent’s plays. There aren’t too many counter-traps in the game but there are a fair few that are really useful.

This list will look at the top 10 counter trap cards in Yugioh, taking general usage and reliability into account, rather than archetype specific cards. 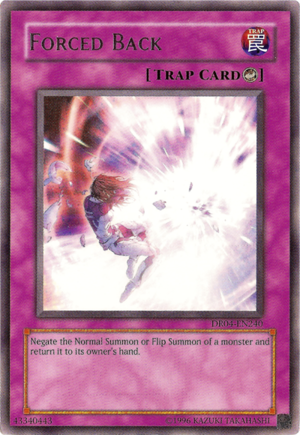 If you’re ever facing someone and really want to give them a middle finger, play this card instead. It’d be much better if it worked on special summons but it’s still fairly decent, negating a normal or flip summon and returning the monster back to your opponent’s hand. It effectively uses up their normal summon for the turn, unless they set a card. 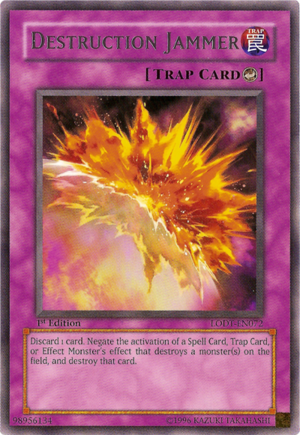 Destruction Jammer is massively under-rated card in my opinion, it’s way too common for your opponent to nuke your field, this card helps immensely in this regard. You do need to discard a card but that’s a fair trade-off to prevent the destruction of multiple monsters! 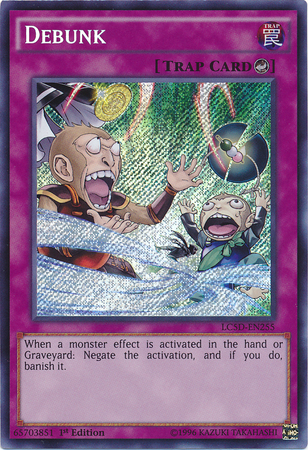 Many cards known as “hand traps” are common in today’s meta, as are cards that have effects in the graveyard. Debunk seeks to negate these effects at no cost. The downside to this card is the fact its useless if your opponent doesn’t use of the said effects but if they do, you’ll have a huge advantage over them. 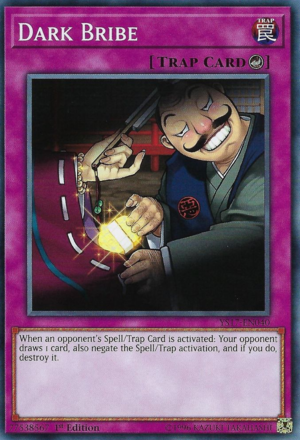 I wouldn’t recommend Dark Bribe for any competitive decks for milling decks, it’s incredible. Giving your opponent a card in return for negating one of their spells/traps is a risk, you never know if the card they draw is going to be advantageous for you or not. Put a few Dark Bribe’s to the side if you can, they may prove useful in the future. 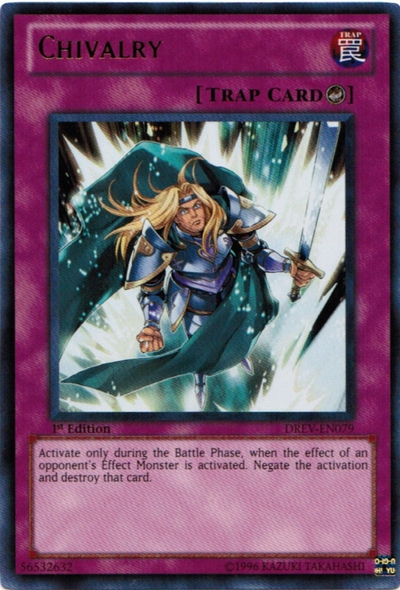 You’ve used a few cards in your hand, spent some time getting your combos set-up and now you have a few monsters on the field. You attack, expecting to deal some damage but your opponent’s monster effect stops you in your tracks. This is really frustrating at times, so having a card like Chivalry will help to alleviate such difficulties. It is quite situational, some would say Breakthrough Skill or Memory Loss are better, but they don’t destroy the monster like Chivalry does!

5. Seven Tools of the Bandit 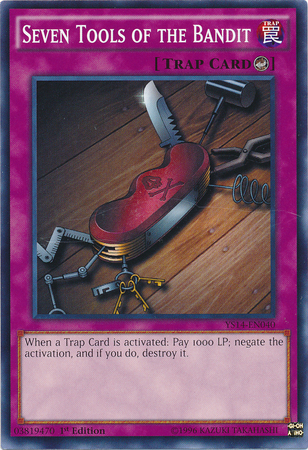 I used to have about 10 copies of this card many years ago, I always thought it was useless so I let them get lost among my commons. What I could do with them now..

Seven Tools of the Bandit will negate any trap card at the cost of 1000 life point, which is a small price to pay for the plays you can prevent. 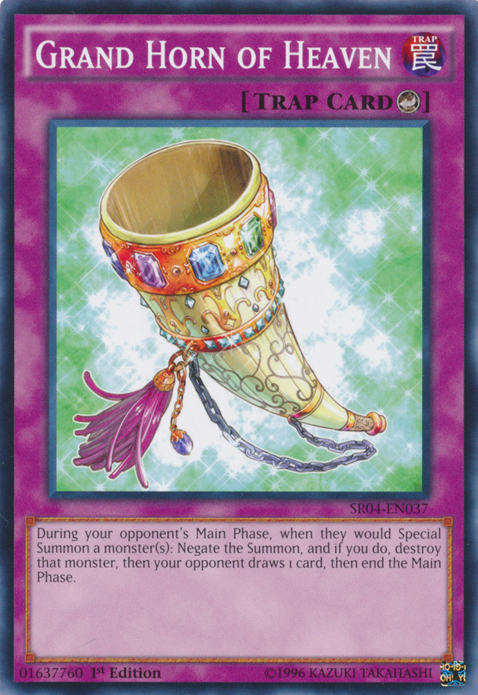 Special summoning is the bread and butter of every Yugioh deck nowadays. It’s common to see your opponent special summon 2 or more monsters in the same turn, you need back-up cards to help prevent your opponent from building up to OTK you. Grand Horn of Heaven is a great choice for this, shutting down your opponent before they manage to get going. It does make them draw a card which can ruin this effect for a lot of players but overall, it deserves to hit the top 5 on this list!

3. Cursed Seal of the Forbidden Spell 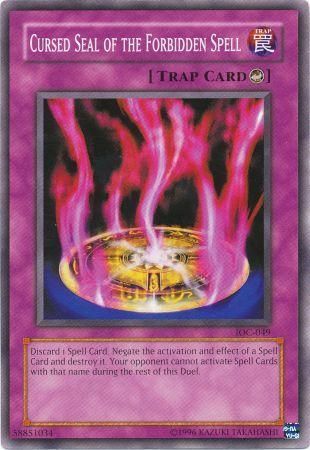 This card is basically an upgraded Magic Jammer, using Cursed Seal of the Forbidden Spell on the right card can be game-winning in its own right.  Imagine you use this on Mask Change or Polymerization, your opponent will likely surrender there and then. This trap would probably be higher on the list if didn’t have the rather severe requirement of discarding a spell card. 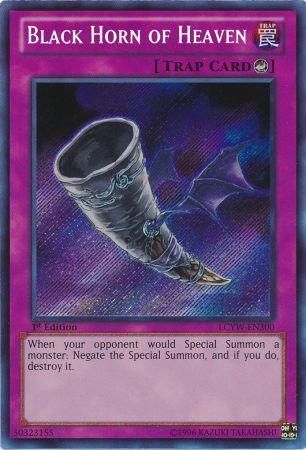 Black Horn of Heaven is a huge kick in the crotch, it’s hilarious to see your opponent’s face when you destroy their strategy without cost. As discussed before, special summoning is the lifeblood of all decks so if you can negate your opponent’s special summons, even just one, you have a big advantage. I highly suggest sticking a Black Horn of Heaven in some of your decks! 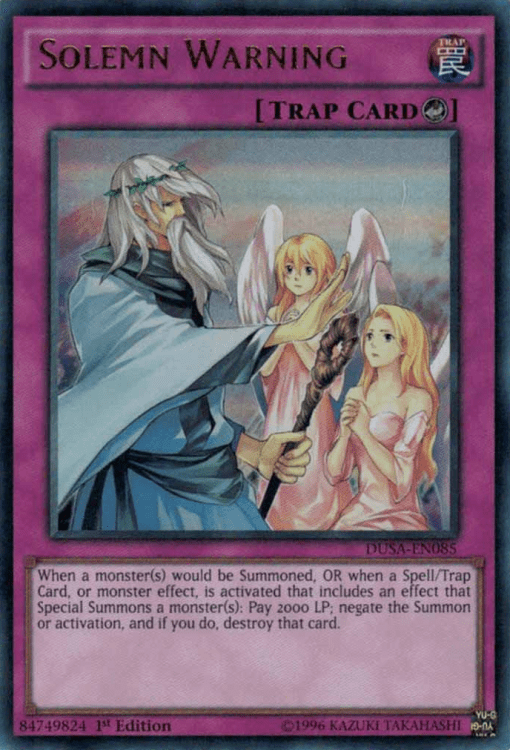 The only limited card on this list had to come first, right now it’s arguably one of the best trap cards in the game. The Solemn trap series boast a number of considerably powerful effects, one of which is even banned. Solemn Warning is pulling through as its limited to 1 which is completely fair, I can’t imagine how boring duels would be if this card would be unlimited. Good luck trying to get one though, they’re expensive to buy and particularly rare to get in packs!

This list is laughable. Where is Solemn Judgement and Strike? Both are better than most of the counter traps listed.

Forced Back hasn't been used in ages because stopping a normal summon doesn't do much nowadays. It's an outdated Trap Card with no real use.

Destruction Jammer has never been good because it's a slow, -1 trap card. It's largely outclassed by My Body As A Shield who has a similar effect, can be used during your turn without setting it and has a way more lenient activation cost.

Debunk used to see side deck play before Strike was released. Now it's largely outclassed by Strike.

Dark Bribe is pretty bad. You don't want to give your opponent free draws unless you can push for game the turn you activate Bribe.

Chivalry is way too specific to ever be useful. The card is Duel Links material at best. I have never seen anyone use Chivalry for good reason. You might as well use Divine Wrath or better yet, Strike.

As much as I love Curse Seal, it's not good against many decks. It's a niche side deck pick at best.

Black Horn Of Heaven is completely outclassed by Strike which can negate multiple monsters summoned at the same time. Shouldn't ever be used unless you want extra special summon negations for some reason.