Some types don’t see much support over the years and they’re barely seen, even in casual play. The pyro type is no exception, most of the ‘good’ pyro cards have been out for years, it’d be awesome if we got some non-archetype support. Pyro monsters should be intimidating and burn life points down but the majority of them are underwhelming. There are some great pyro monsters though, not all of them are only viable in a fire/pyro deck as well. 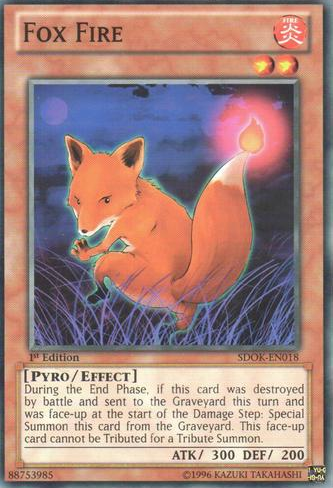 One of my personal favorite cards, Fox Fire is a great little monster who can keep coming back from battles. It can’t be used as a tribute summon which is a bit of a letdown but its great for stalling or for use as a synchro/xyz material. It’d only be worth sticking one Fox Fire in your deck, that’s all you need! 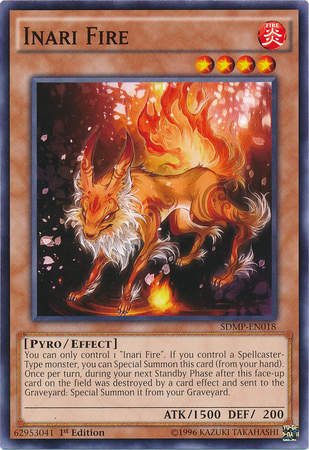 Similar to Fox Fire, Inari Fire keeps coming back if its destroyed by card effects. It can be special summoned from your hand too if you control a spellcaster type monster, although that is situational. It’s another great little card to use as a tribute or a synchro/xyz material. Sometimes it’s nice to get monsters back, the reliability can be valuable. 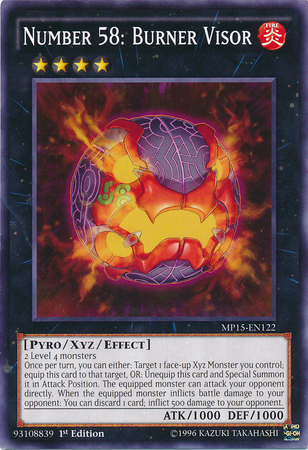 Combine this XYZ monster with something like a Heroic Challenger – Excalibur and you can deal up to 4500 life points of damage in one turn. This is the kind of monster a pyro type should be, providing nothing but damage. The requirements are easily met, the only thing holding it back is the fact you need another XYZ monster on the field for this card to be viable. 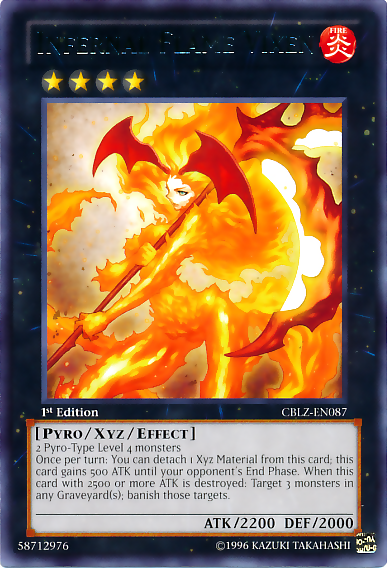 What a card, this XYZ monster slots in perfectly to any pyro type deck, you really need 3 copies of this card. Easy to summon, great ATK/DEF stats and a nice backup effect make it a mandatory choice for any deck with pyro type monsters. It also looks pretty awesome which is another trait you should seek. The ability to banish your opponent’s monsters from the graveyard cannot be understated, it can win you a duel against the right deck. 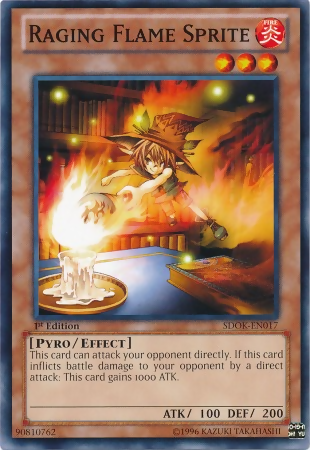 Although it does take a fair few turns to get going, Raging Flame Sprite is a threat the opponent has to deal with as soon as possible. Combine Raging Flame Sprite with something like Gravity Bind and you have a huge advantage over your opponent. They’ll have to waste their valuable cards while you build up to hit even harder after they retaliate. It’s such a great card that I rarely see but it’s a game-changer if used correctly. 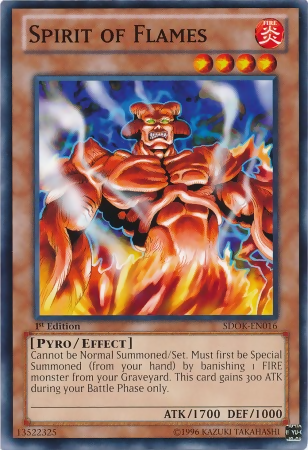 The best thing about pyro type monsters, in my opinion, is the abundance of level 4 monsters that can be special summoned from the hand (Inferno is another). You simply banish fire monsters from your graveyard to summon one (or more) Spirit of Flames, ready to be used as XYZ or synchro materials. Hell, you can even tribute them for a boss monster. Cards like this provide decks with a much needed boost. 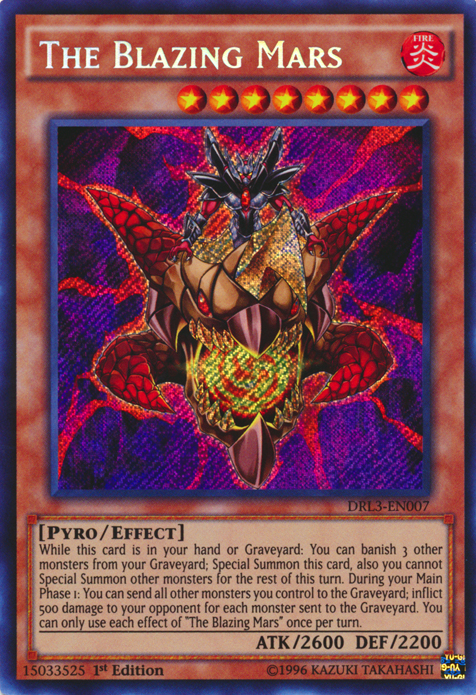 You wouldn’t really use its secondary effect unless your opponent has really low life points but summoning a 2600 ATK beater with such low requirements is a godsend at times. If not for its power, stick it in your fire/pyro deck for pure aesthetics, such awesome art has to be put to use.

Just like the previous entry, The Blazing Mars can be used a backup tribute for a tribute summon too. So many options! 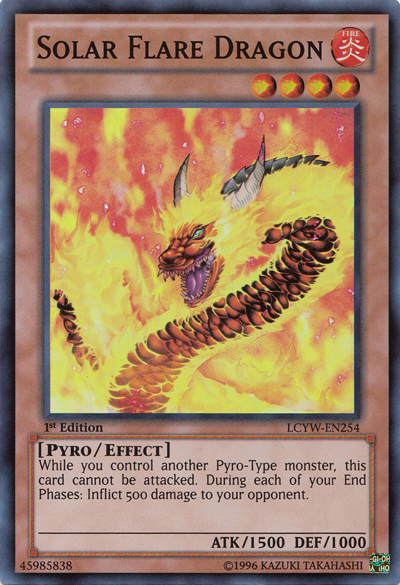 The legend itself, Solar Flare Dragon. Do you know what happens when you have two of these monsters out on the field? Your opponent can’t attack and they take 1000 life points during each of your end phases. It’s remarkably easy to get two on the field as well, especially if you use a card like UFO Turtle. Pyro decks don’t have much in terms of big boss monsters compared to others, so they need to be able to deal effect damage, Solar Flare Dragon helps immensely in this regard. 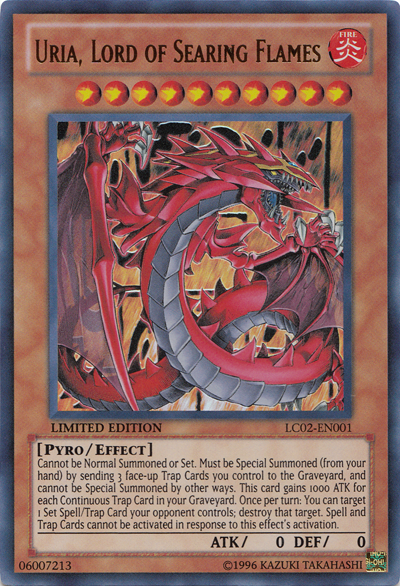 Uria had to make the list, it’s a Sacred Beast and should be treated as such. While it’s not the easiest to summon, it’ll serve you well once its out on the field. You’d likely have to make a deck specifically for Uria, instead of putting it with the rest of your fire/pyro cards. There’s just something about Sacred Beasts that makes them one of the most satisfying monsters to summon. 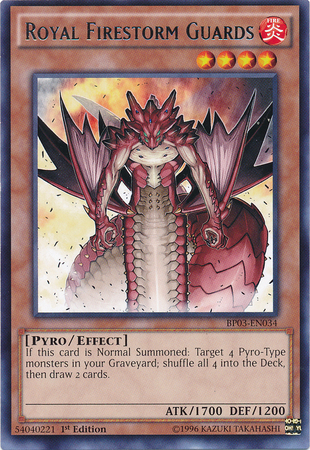 By far the best pyro type monster is the Royal Firestorm Guards. A low-level monster with a decent ATK stat can always be useful. But if you give it an amazing effect, you have yourself a winner. Summon this monster and draw 2 cards (if you add the monsters back to your deck), that’s it. If you shuffled cards like the 5th entry on the list, Spirit of Flames, you may get them to your hand again. All ready for you to special summon it, then XYZ summon. The combos are amazing, the pyro type is certainly underrated!