The very definition of darkness and evil are embodied within the fiend type. This type is full of monsters straight of out of nightmares, looking twisted and deformed. In terms of gameplay, they often have powerful and deceitful effects, bolstered by high ATK/DEF stats. Such a unique style is attractive to many players, there’s only so many ‘good’ themed decks you can have. If you have a fiend type deck or are thinking of making one, you’ll need to know which fiends to look out for. Luckily, I’ve done the research for you, so here’s the top 10 best fiend type monsters in Yugioh! 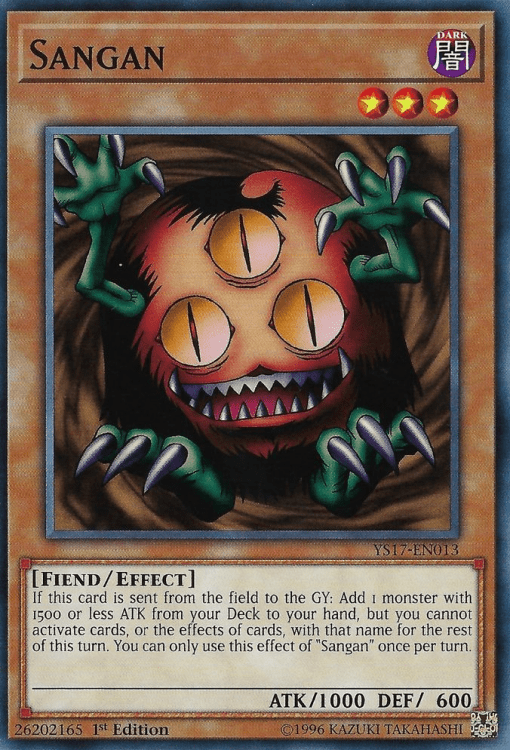 Sangan was on the forbidden list for many years and for good reason, it was insanely useful. Nowadays, not so much, due to the revision of its effect. It’s still a good choice though and not just in a fiend type deck. It fits an Exodia deck like a glove, as well as any other kind of stall deck. No doubt you have a massive amount of Sangans piled up from over the years, time to put them to use! 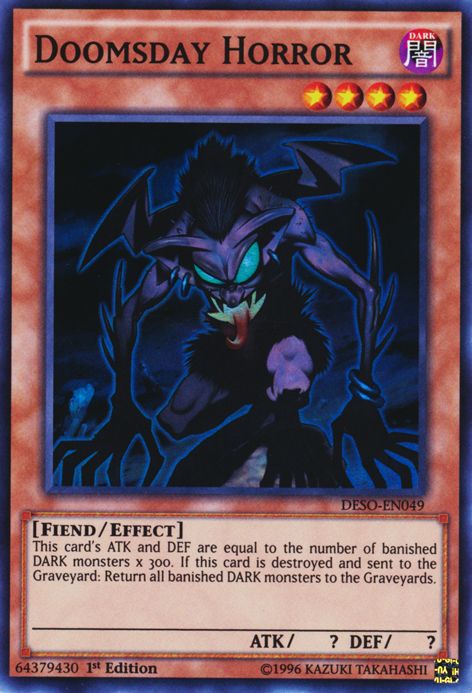 Most dark attribute decks will benefit greatly from manipulating and banishing their cards (such as Allure of Darkness). If you have any kind of dark deck that uses these strategies, Doomsday Horror is a card for you. The downside is it requires a bit of setup and multiple banished cards to get going while most duels end within the first few turns, preventing such a build-up.

8. Gorz the Emissary of Darkness 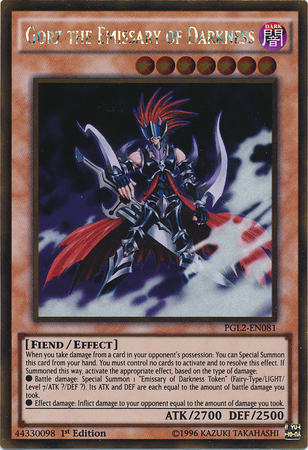 What a legendary card, Gorz has been a classic for years. It’s still a great choice in a number of decks, especially decks based around the fiend type of dark attribute. It can be a life saver at times, turning a clear defeat into a possible victory. While it is situational, you can control your cards well enough to use Gorz at the right times. It’s overall an amazing card, a legend of the game and a great fiend type monster. 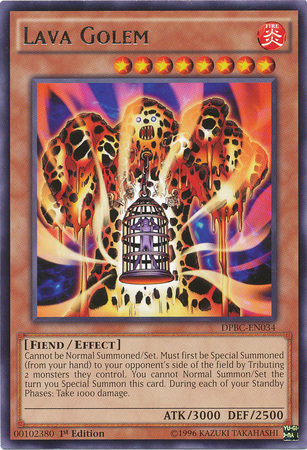 Sometimes a card like this can completely change the course of a game. Not just the fact it deals 1000 life points of damage for each of your opponent’s standby phases, the sheer power that comes from tributing two of your opponents monsters is incredible. It isn’t summoned by an effect so even monsters that are unaffected by monster effects can be tributed. 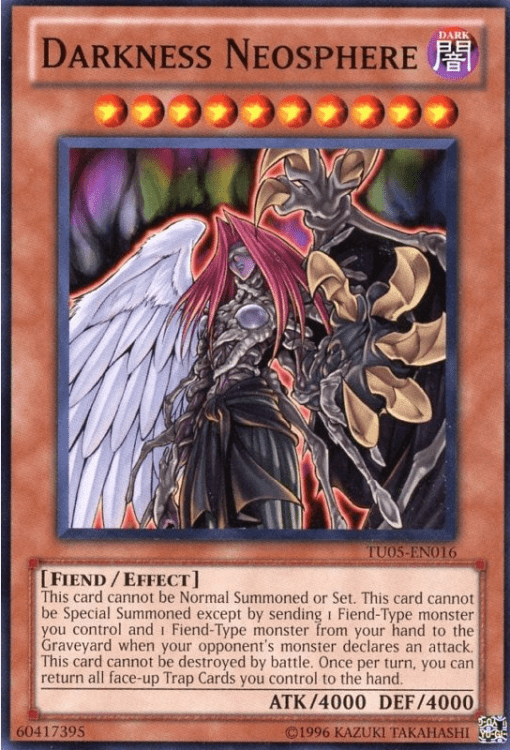 There’s only one thing preventing this card from reaching the top 3 on this list and its because of the summoning requirements. It’s really situational, needing a fiend on your field & a fiend in your hand when your opponent attacks. It’s worth it though, Darkness Neosphere is an absolute monster when its out on the field, capable of wreaking havoc among your opponent’s monsters. It’s one of the few non-archetype monsters that should be in any fiend type deck. 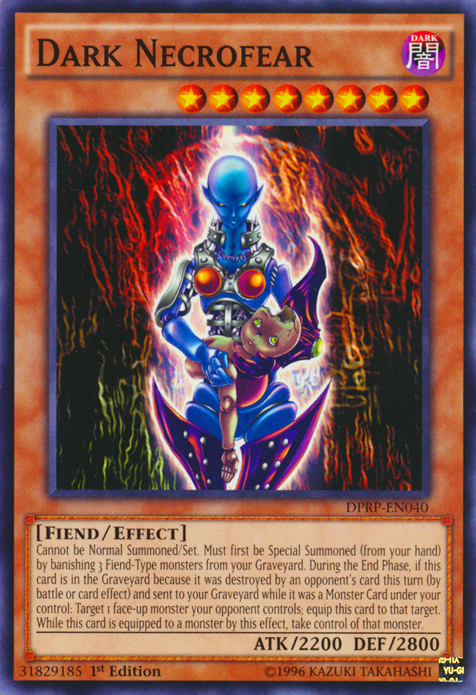 Another classic card, Dark Necrofear has been a legend for years. Just three fiend type monsters in your graveyard are demanded to get this monster on the field, there it’ll put in a good shift both offensively and defensively. If it gets destroyed, who cares? It’ll take control of an opponent’s monster. Also, the shiny variants of this card looks immense. It’s well worth sticking a Dark Necrofear in any deck containing fiend type monsters. 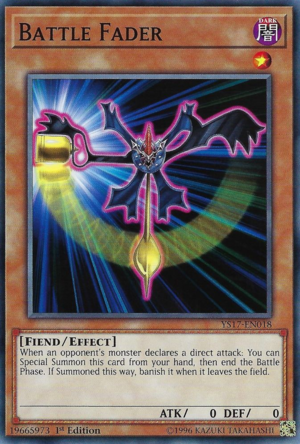 I can’t tell you how many times Battle Fader has saved me, I literally can’t. I only have this card in stall decks but I can see the usefulness in a number of other decks. Being able to block a direct attack and end the battle phase is amazing, so many decks rely on their OTKs to win so if you can prevent it, you’ll have an advantage going into your next turn as they’ve likely exhausted their resources. 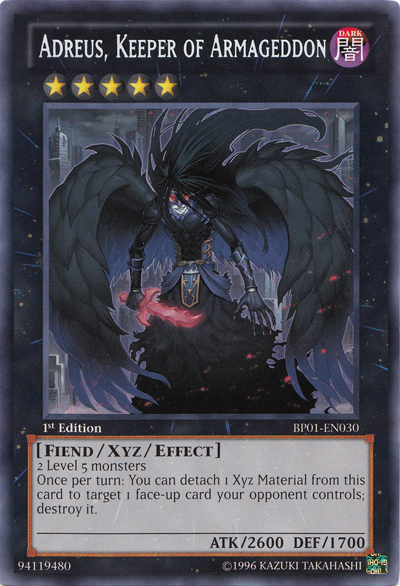 Simple but strong, this monster is a must-have for any deck containing level 5 monsters. The high ATK stat can allow it to hold its own against monsters of a higher level/rank and the ability to destroy any face-up card cannot be underestimated.  Due to the easiness to summon and formidable effect, it makes the top 3 of this list. 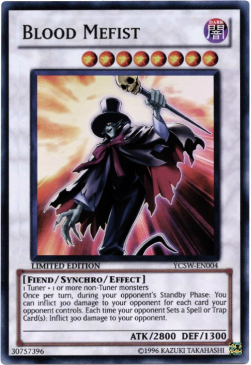 There are plenty of level 8 synchro monsters available, many of which are competent choices but this should be considered too. It’ll fit into any deck that can synchro summon, there it’ll provide an option that can easily win you the game. Get your opponent down to low life points? Summon Blood Mefist, end your turn and they might take enough to lose the game. With 2800 ATK, it can perform well as an attacking monster too.

1. Tour Guide from the Underworld 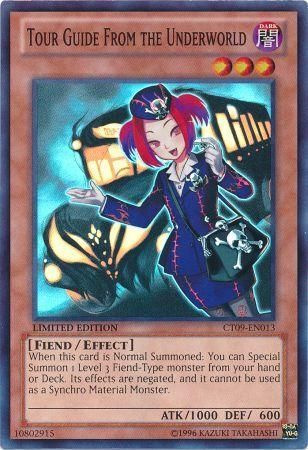 Tour Guide from the Underworld is limited to 1 copy per deck right now, as it should be. The effect is basically a free level 3 XYZ monster which is invaluable in a myriad of decks and strategies. It was so busted on release that the Yugioh community was all over it, prices skyrocketed and new tactics were being invented. Only now is it in a good spot, years after release. Even then, it’s still the best fiend type monster in the game!

I personally own a Cubic deck, and I think that Crimson Nova is a really good card and deserving a spot on this list.

"Grapha, Dragon Lord of Dark World" I think still stands as one of the best and most irritating boss monsters with the introduction of the "Danger!" Archetype.

This is a great list, but why isn’t “Masked Beast Des Gardius” in here? I know it is a little hard to summon, but it is so useful with its high attack stat and effect. I could be wrong, so please tell me if I am.