Even though you can use weapons like magic potions and crossbows to fight monsters in The Witcher 3, your silver sword is undeniably your most important weapon. Silver swords deal the most damage to monsters and give you the best chance of dominating the game. There’s no better feeling than slashing through a bunch of monsters with a super high damage sword, so today we’re going to tell you which silver swords are the best. Get your hands on one of these and you’ll become the ultimate monster hunter! 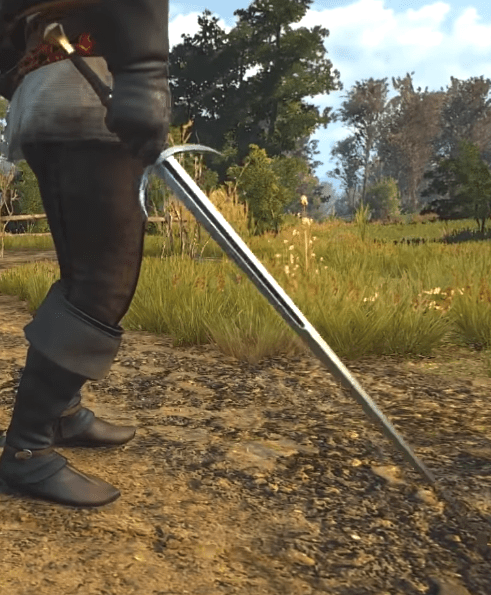 True to its name, the Bloodsword has a chance of causing your enemies to bleed, which weakens them over the course of the battle and makes them easier to kill. Some monsters are immune to bleeding, but it’s highly effective on the monsters who aren’t. So all in all, bleeding is a pretty great feature.

Bleeding is the main reason why we recommend the Bloodsword, but it also has a solid critical hit damage bonus and a chance to cause dismemberment, which are pretty awesome features too. It’s a great choice for lower level players because you only have to be level 15 to use it.

(Spoiler) How to Obtain: Go to the mercenary camp east of Oxenfurt.

If you like to use magic in combination with your melee attacks, then this is the sword for you! This sword has a chance of causing your enemies to stagger, which slows them down and makes it easier for you to cast your signs. It also increases the intensity of the signs Igni and Yrden, so if those are your signs of choice, you need to get your hands on this sword.

(Spoilers) Where to Obtain: Naevde Seidhe can be found in multiple places throughout the game: in a monster’s den west of Gedyneith, during the the For Fame and Glory quest, and in the ancient crypt on Ard Skellig. 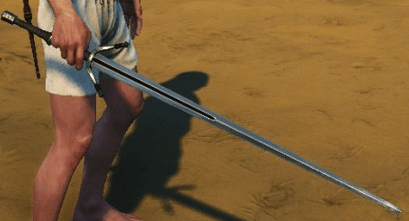 You’ll need to be at least level 31 to use this sword, but it’s worth the wait! It has high critical hit damage of 75% and a chance to dismember that sits at 5%. You’ll get a nice experience bonus when you use this sword to fight monsters, which is what it was made to do.

(Spoilers) Where to Obtain: You can find the diagram for this sword being guarded just southwest of Freya’s Garden. 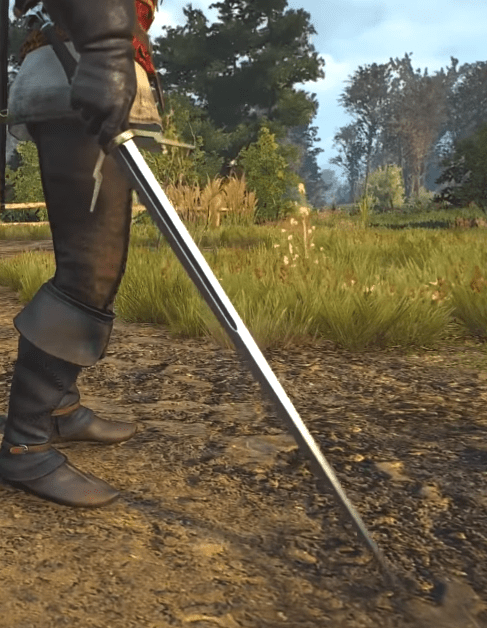 Just like the Weeper sword, this one gives you some nice critical hit damage and bonus experience when you use it to fight monsters. In addition, it gives a 15% sign intensity bonus, which is a big perk. This sword is a great choice if you like to use both magic and metal to fight monsters.

(Spoilers) Where to Obtain: You can find the diagrams for this Mastercrafted Sword inside of Kaer east of Ard Skellig. 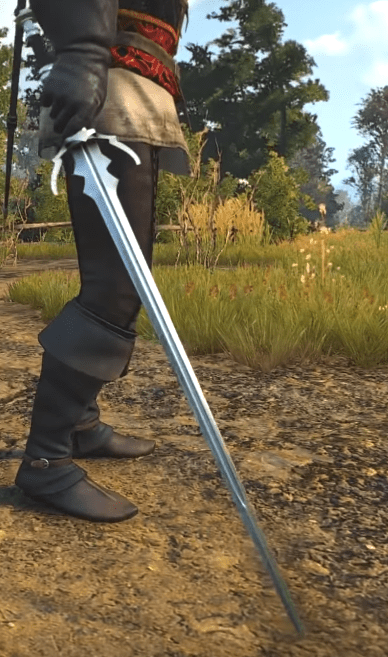 Feline gear is great for players who want to be able to move around a lot during a fight and recover their stamina quickly. If you have a high energy style of fighting and like to dodge all of your enemy’s attacks, then this sword and the rest of the Feline gear may be the best choice for you.

At 15%, this mastercrafted sword provides the highest chance of bleeding yet! We think that’s a big advantage in and of itself, but this sword will also give you a nice Aard sign intensity boost while you’re wielding it. If those features aren’t enough, it gives you extra experience when you’re fighting monsters and packs a big punch with 410 damage. It also looks pretty great, too! This sword has some cool cutouts in the metal that make it our favorite sword as far as aesthetics go.

(Spoilers) Where to Obtain: The schematics for this sword can be picked up inside a monster den east of Harviken. 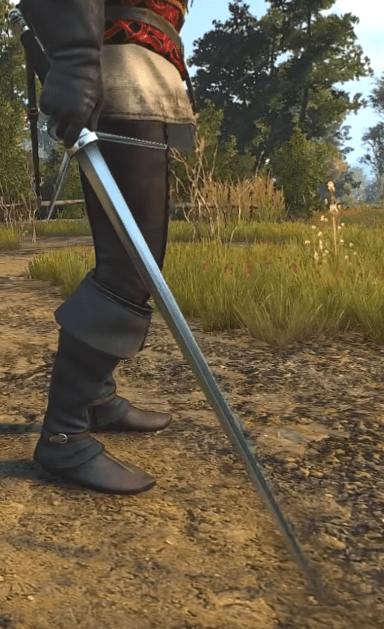 Ursine gear is a great choice for players who want to be able to take a lot of damage during a fight. Getting your hands on this sword is a great way to start building up your collection of Ursine gear. It gives you a 14% chance of dismembering your enemies and critical hit damage of 75%. You’ll also get a nice experience bonus of 20% when you fight monsters, just like a lot of the other swords that are high up on our list.

(Spoilers) Where to Obtain: The schematics for this sword can be found in a monster’s nest on a small island northeast of Olena’s Grove. 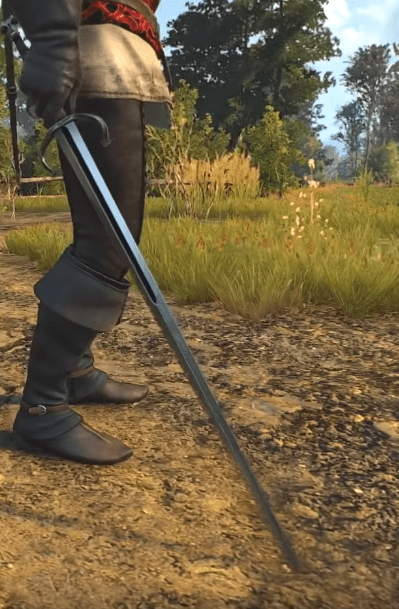 I’m sure you can tell why this sword is on the list! It provides a huge amount of damage, so with this sword in your hand, you’ll have no problem killing any monster that attacks you. The Harpy also has a slightly higher chance than the Bloodsword of making your enemies bleed, which will cause them to continuously lose health and make them easier to finish off.

(Spoilers) Where to Obtain: Depending on your gameplay, the diagram for this sword can either be found in a sunken chest outside of a fisherman’s house in Velen’s No Man’s Land or in a bandit camp on the top of a hill northeast of Lindenvale. 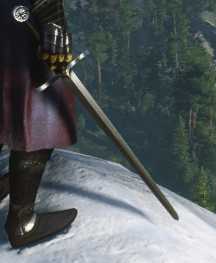 This is the most upgraded version of the Wolven Silver Sword. In addition to dishing out fantastic damage, it gives bonus adrenaline points, an increased chance of scoring a critical hit on your enemies, and extra sign intensity. Just like the Bloodsword and Harpy, it can cause your enemies to bleed and weaken them, making it easier for you to go in for the kill. When you use this sword to fight monsters, you’ll also get bonus experience, which is a nice plus. We love all the features this sword has and think it’s a great choice for experienced players who value mixed play.

(Spoilers) Where to Obtain: The diagrams for this DLC sword are inside of the Termes Palace ruins east of Beauclair. 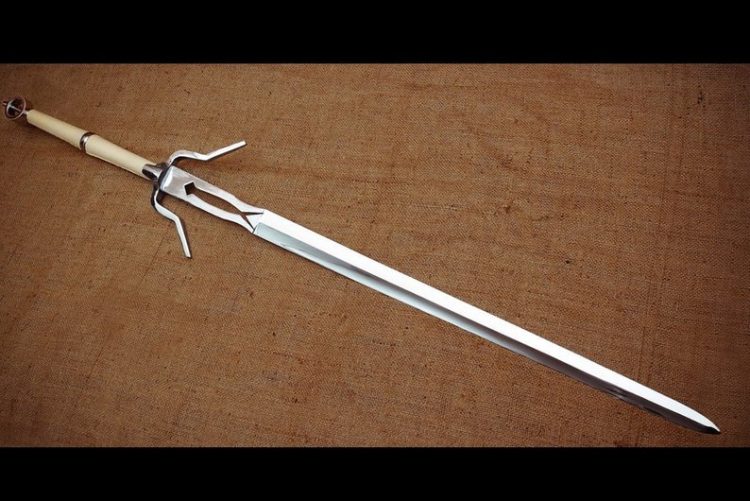 This is another sword that we recommend mainly because it deals a huge amount of damage. That’s not its only useful feature, though. This sword boosts your vitality by 50, allowing you to better withstand your enemy’s attacks. The Tor Zireael also has a good chance of freezing the monster you’re battling in its tracks. This makes it much easier to attack it or take it out with your magic.

(Spoilers) Where to Obtain: You can only get this sword when you make it to the end of the main story. You have to achieve the “good” ending of the game to obtain it, so it’s one of the rarest sword in the whole game! 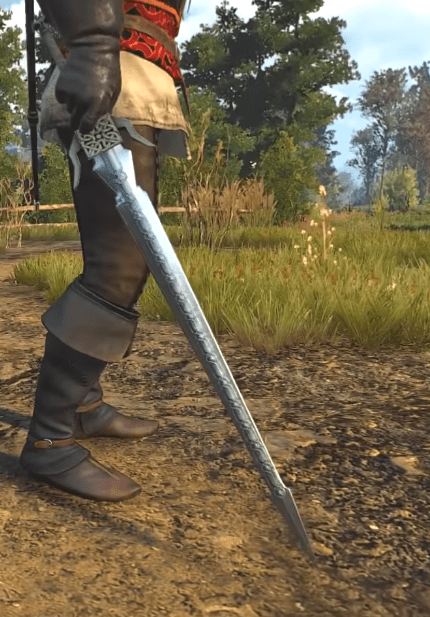 Besides delivering incredible raw silver damage to your enemies, this sword also gives you large Igni sign bonuses, an increased freeze chance and a nice little experience bonus! It’s undeniably the most powerful sword in the game, so it’s no secret why it tops this list. It also has an ornate hilt that really makes it stand out from other swords. You’ll look awesome while you’re swinging it!

(Spoilers) Where to Obtain: This sword can be picked up after reaching level 67 on the northern edge of Kaer Muire.