Awesome monsters are what Yugioh is all about, unless you play competetively of course. There’s nothing like an epic boss monster, many of which tend to be of a high level. After around level 7 or 8, monsters start to be very intimidating to behold. Level 10 monsters are up there with the best and most stunning cards in the game. Including a level 10 monster can be a good choice for a really fun deck!

This list will go through the best level 10 monsters in Yugioh. I have tried to rank them based on generic effectiveness, rather than cards that are extremely good but only in specific strategies. These cards are as strong as any monsters you’ll see in the entire game, even though their levels aren’t the highest! 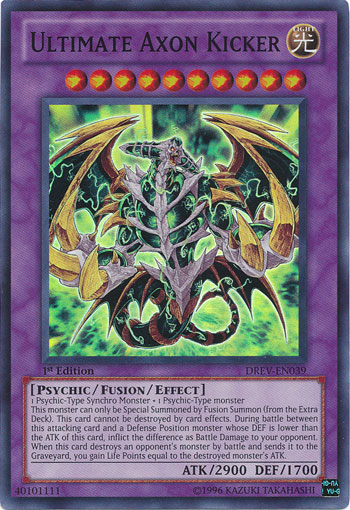 One of the best and most monumental of all Psychic type monsters, Ultimate Axon Kicker is a force to be reckoned with. The ATK/DEF stats can be considered fairly low for a monster above level 8 but its effect more than makes up for it. Overall, this monster will easily hand you the game if you can protect him. Significant summoning requirements are quite detrimental to its position on this list! 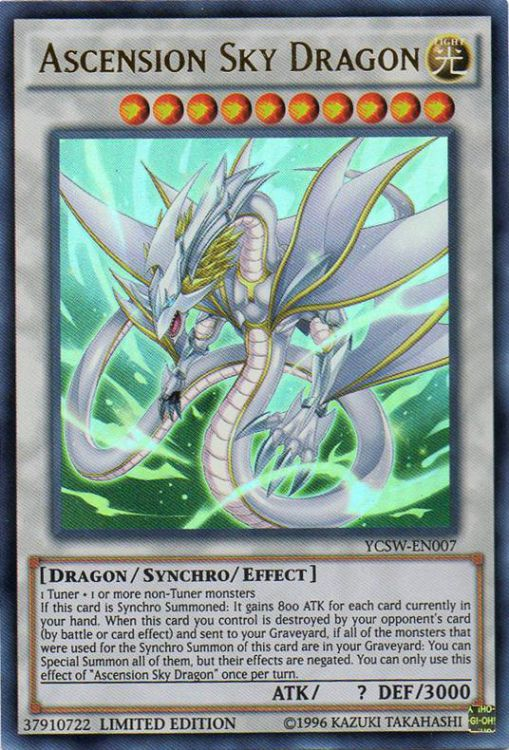 Arguably among the most badass looking dragons in Yugioh is the Ascension Sky Dragon, a powerful card with plenty of flexibility. Summoning requirements are fairly lax, giving you more leeway when it comes to getting this card on the field. You have to love how it’s not specific to any type, attribute or archetype. You can fit this level 10 synchro monster into any deck with tuner monsters, if needed! 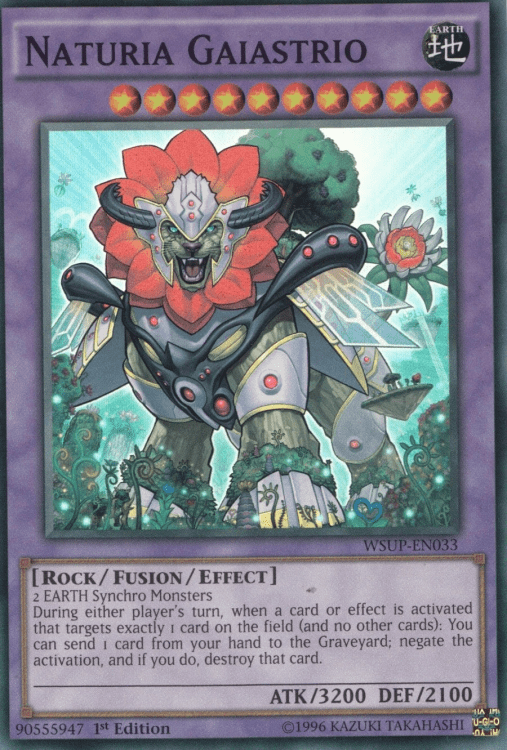 Crazy fusion demands usually result in a better card, although if Naturia Gaiastrio was made any better, it’d certainly be on the banlist. While its effect is situational, resulting in few uses, the ATK stat allows this card to pummel most monsters it comes across. One thing I don’t understand is it’s type, isn’t it clearly more Plant than Rock?

7. Leo, the Keeper of the Sacred Tree 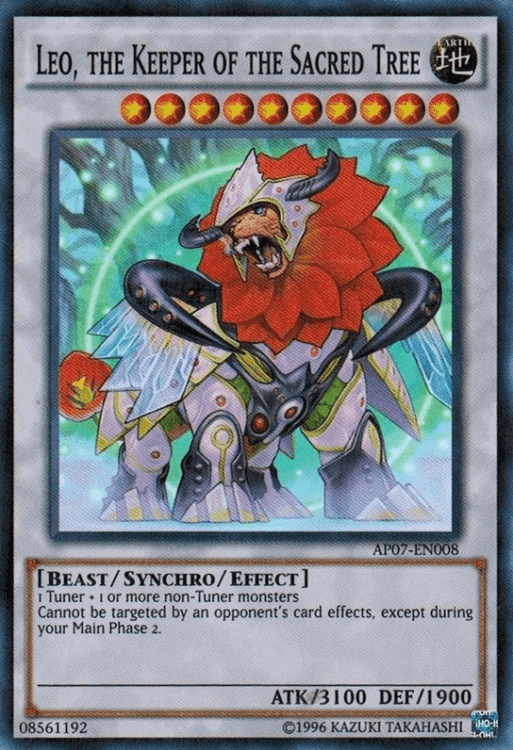 Quite obviously a close relation of the previous entry (seriously, their appearances are almost exact), this monster is another great extra deck option. Even though it has reduced stats over the previous entry, more feasible summoning conditions give it an edge on this list. Both effects of Gaiastrio and Leo are great but I believe this is better, as you do not need to discard a card, although it only prevents itself from being targeted.

6. Beelzeus of the Diabolic Dragons 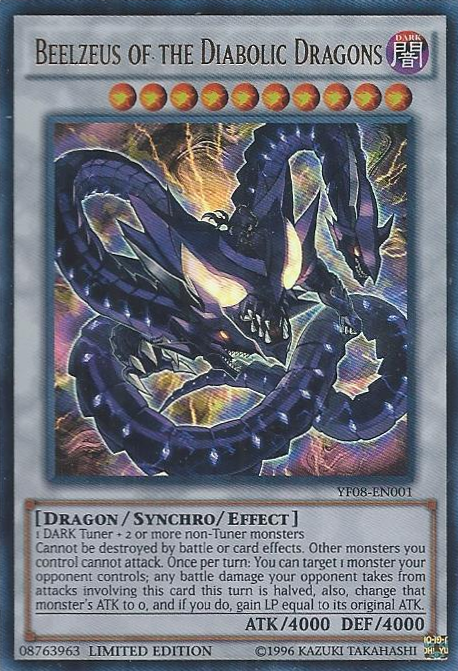 Now we’re starting to get to the real cream of the crop. Beelzeus of the Diabolic Dragon is undeniably one of the coolest dark cards ever created and it signifies what a boss monster should be. Extreme power with a small trade-off, as well as decently difficult summoning requirements. This monster is balanced yet very strong and satisfying to use/summon! 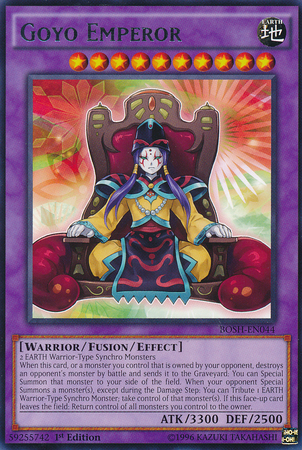 Goyo Guardian was absolutely broken upon release, being banned not longer after for completely ruining Yugioh. Now he’s unbanned and pretty meh, Goyo Emperor can take his place as the main Goyo card. It expands on Goyo Guardian’s monster stealing capabilities, while providing more ATK/DEF stats. Weaknesses to card effects are the only thing preventing this card from entering the top 3! 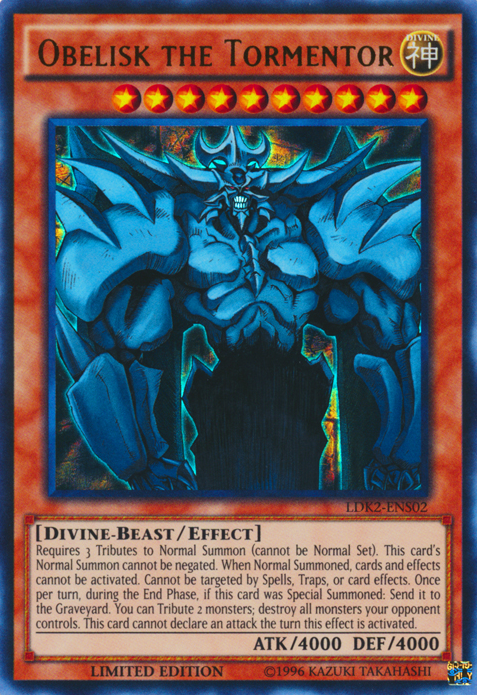 I think you’ll agree when I say the Egyptian Gods need some support. Nothing major, just something to reduce their glaring weaknesses. For a trio of insanely powerful demi-gods, they couldn’t be less scary. Save for Obelisk that is, the only Egyptian God to have some kind of card effect immunity. It can’t be targeted, although a Mirror Force will take him out easily. High ATK/DEF stats, respectable summoning conditions and a decent effect give him a shout for the top 5 on this list! 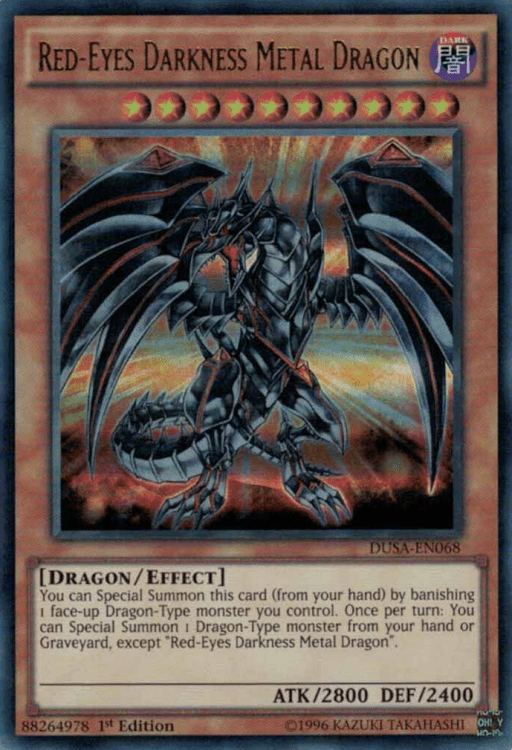 The only monster on this list to make the Yugioh Forbidden List at some point (never been banned though, always limited to 1). There’s a case to be made for Red-Eyes Darkness Metal Dragon being number 1 on this list, no other Dragon type monster brings so much to a Dragon type deck. Being able to special summon any Dragon monster from your hand or graveyard is way too good to pass up. 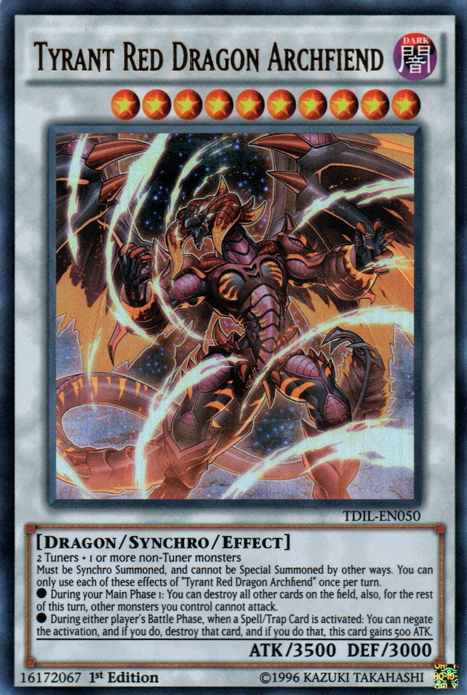 What an outrageously powerful card..

Well, with 2 tuners required, this card’s power is fairly justified. Getting 10 levels worth of monsters, with 2 tuners, isn’t the easiest thing to do. It’s not impossible either though, in fact I’d say the summoning requirements could have been a bit higher!

After bringing Tyrant Red Dragon Archfiend from your extra deck to the field, victory will be guaranteed as there’s not much your opponent can do at that point! 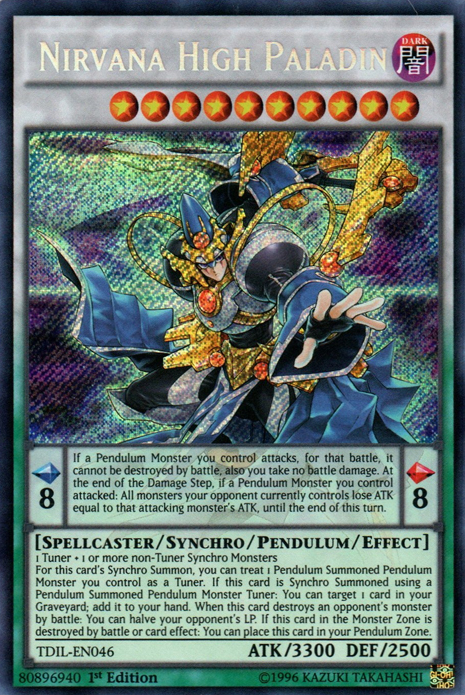 In spite of the previous entries being asburdly good, Nirvana High Paladin deserves the number 1 spot, by a fair distance. Competent both in the monster zone and pendulum zone, you’ll be hard pressed to find a monster you’d choose over this guy. Summoning this level 10 monster is easy, simply obtain a level 6 synchro monster and choose a level 4 pendulum summoned pendulum monster to act as a tuner (stated in Nirvana High Paladin’s effect).

To summarise, this card is much stronger than any previous entries, possibly even more so than any other synchro monster in the game!

If this was newer, blackwing full armor master would definitely be there, if not number one