Artifact, the digital card game produced by Valve, is getting close to its public Beta launch in October, 1 month ahead of its official release date on 28th November, 2018.

Since Artifact aims to deliver the MOBA experience of Dota 2 through a card game and the gameplay has been designed to mimic the battles from its Dota 2 counterpart, there are a lot of excited fans eagerly awaiting to play with their favorite characters in a card format.

But which heroes made it to Artifact, and more important, which ones are currently the strongest in the game? For more than 6 months there has been a closed beta where a select group of players got a chance to test the game, and our friends from ArtiGaming.com – a website dedicated exclusively to Artifact News and Guides – provided us a current top 10 Best Heroes in Artifact ranking.

Get a head start on your opponents by learning which of these Heroes are currently the strongest in the game, so when you open them from packs, you know you’ve got a winner. 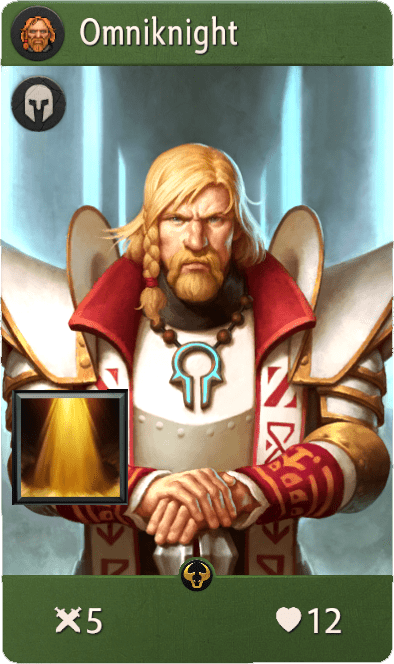 There were a lot of heroes vying for the last spot in this top 10, but in the end we decided to give it to Omniknight.

Omniknight is a green hero with 5 Attack, 12 Health and an active ability that heals a unit for 3 points. The cooldown on that active ability is pretty low, only 2 rounds, so you can keep your board healthier for a long time as long as Omniknight does not die in his lane.

His signature card gives a permanent buff to any green hero such as his allies have +2 Regeneration. It’s a situational effect that requires planning, but the payoff is worth it. 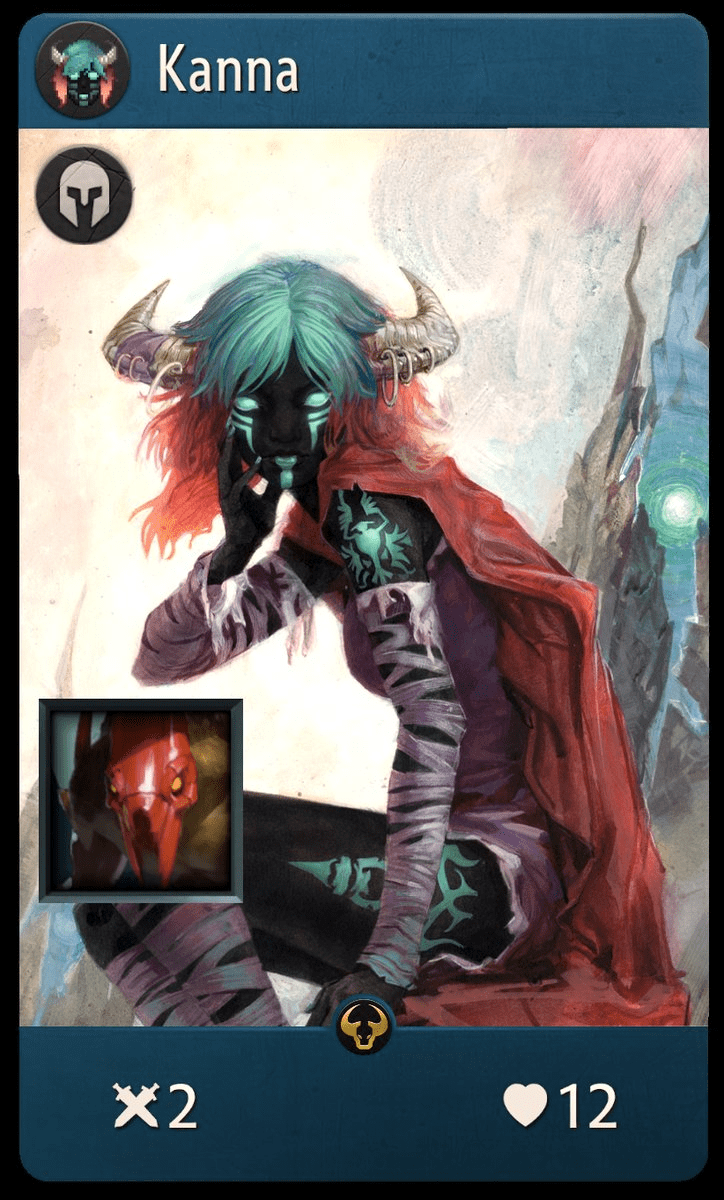 Kanna is a blue hero with 2 Attack, 12 Health and a passive ability that guaranteed that Melee Creeps are always deployed into Kanna’s lane. This can be an advantage or a disadvantage, depending on the game and how well your opponent plays around that lane.

What makes Kanna strong is her very unique signature spell that summons a 2 Attack 1 Health unit on board for each damaged unit. In the beginning it was rated very highly because of the insane amount of value her spell was able to get, but once people figured out how to play around her, she become more manageable. Still one of the best heroes in the game. 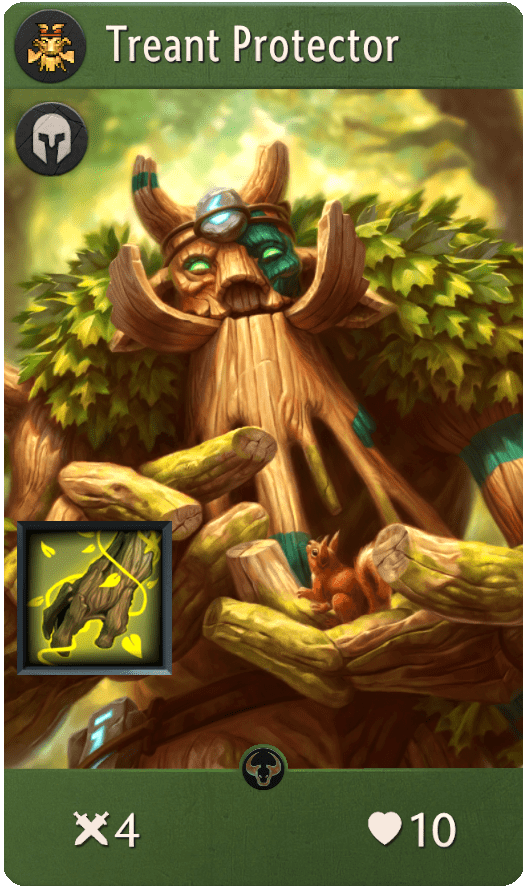 Treant Protector is a green hero with 4 Attack, 10 Health and a passive ability that gives his allied neighbors +2 Armor. Do you have a board that you want to stick for what feels like forever? Place Treant protector in it and the +2 Armor makes it extremely hard for your opponent to remove it.

His signature card summons a 2 attack and 6 health unit on board that gives your tower +1 mana, as long as he stays on board. It’s the first instance of a hero giving mana ramp in our top 10 list, and what makes him such a strong hero. 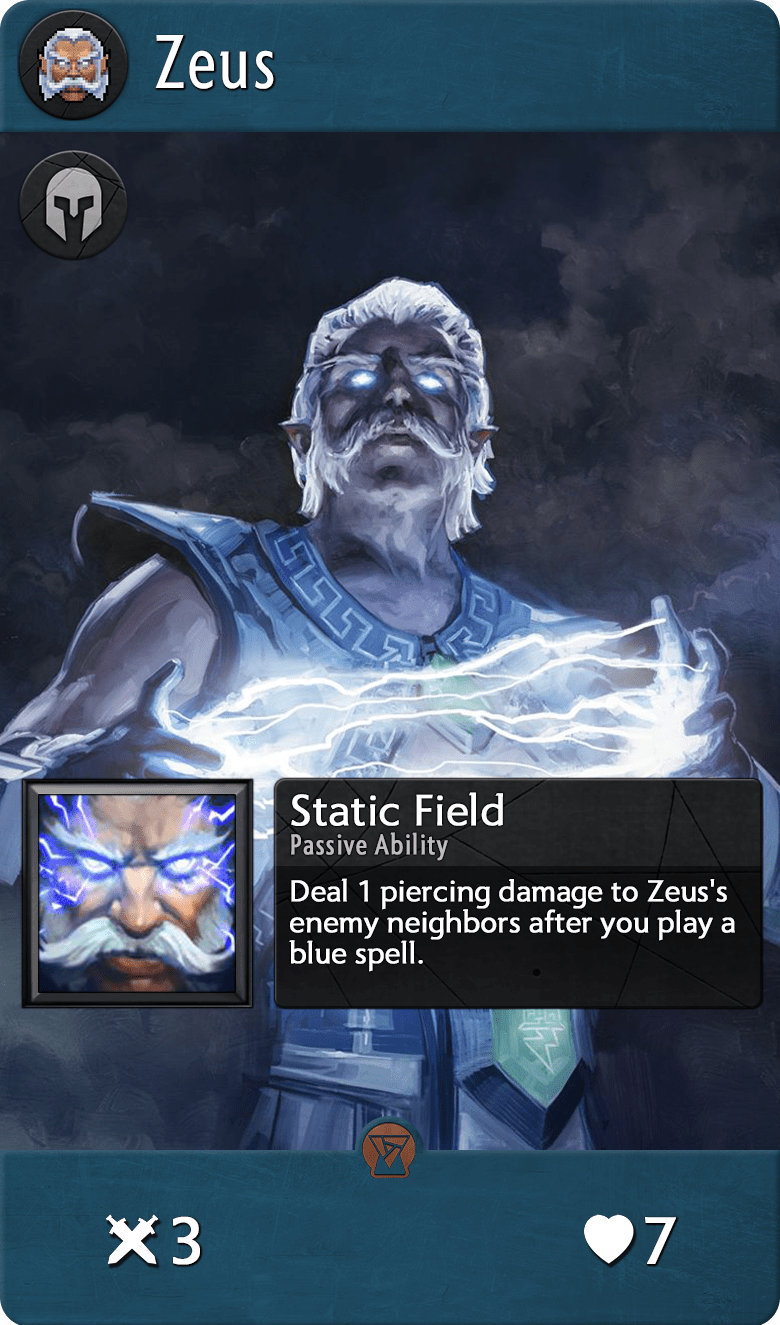 It would not be a true top 10 best heroes in Artifact ranking without mentioning our favorite character from Dota 2, Zeus.

Zeus is a blue hero with 3 Attack, 7 Health and a passive ability called static field which deals 1 piercing damage to Zeus’s enemy neighbors after each blue spell played. If you manage to chain a couple of those cheap spells, the 1 damage starts to add up.

But what makes Zeus truly powerful is his signature spell Thunder God’s Wrath which deals 4 piercing damage to each enemy hero in all lanes. It’s the first truly premier cross lane removal spell and it’s valued highly in blue decks. 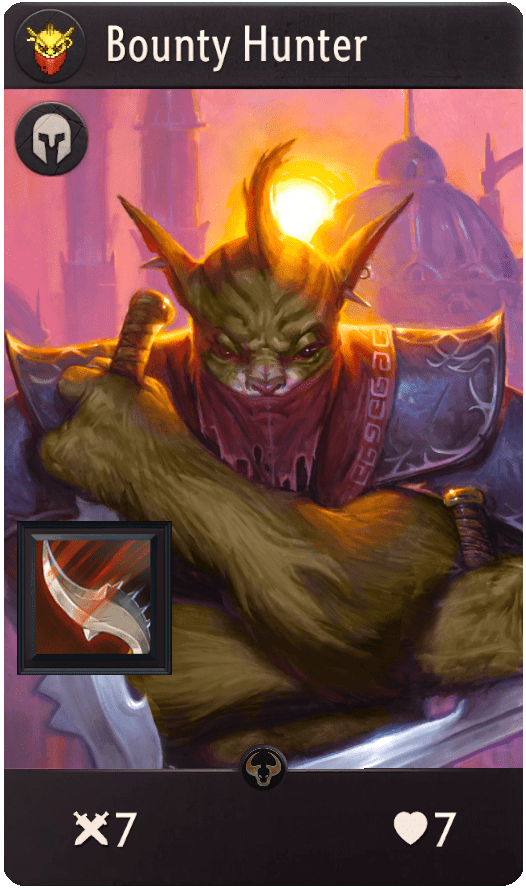 Bounty Hunter is a black hero with 7 Attack, 7 Health and a passive ability that gives him a 50% chance to get +4 attack before the action phase. It’s the first instance of serious RNG in our top 10 list, but when you get lucky and you hit for 11, it feels very good.

What makes him a very strong hero is his signature spell Track, which gives an enemy hero +10 gold bounty until it dies. This spell makes him enable the dreaded Economy archetype by himself, where you get a lot of gold and just out value your opponent with items from Secret Shop. 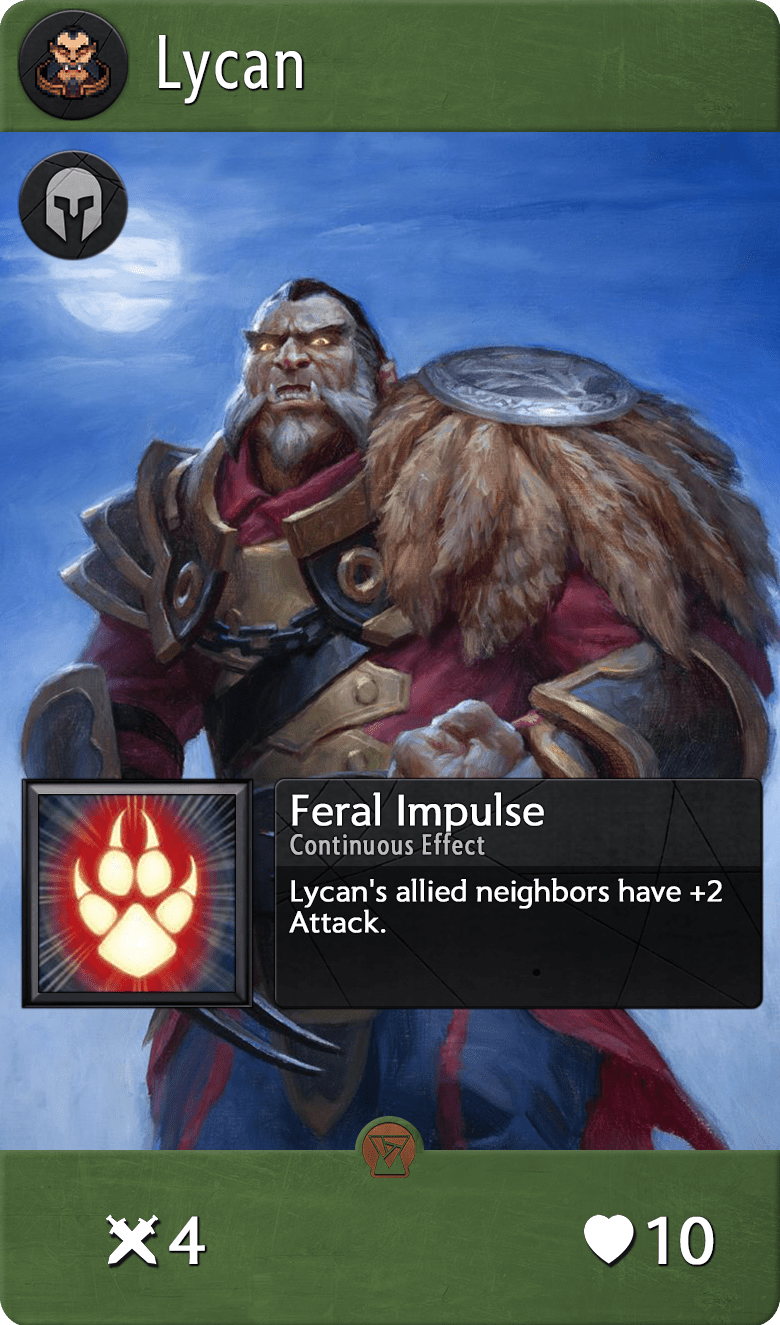 Lycan is a green hero with 4 Attack, 10 health and a continuous effect that grants his allied neighbors +2 Attack.  He’s the first hero in our top 10 list which is not that threatening by himself, but because he buffs your board converting weaker creatures into serious damage dealers.

His signature card is Savage Wolf, which summons a 3 Attack and 3 Health creature on board which grows with +1 attack and +2 health after each combat phase.  As you can see, there is a lot of value when playing this hero that requires an immediate answer from your opponent. 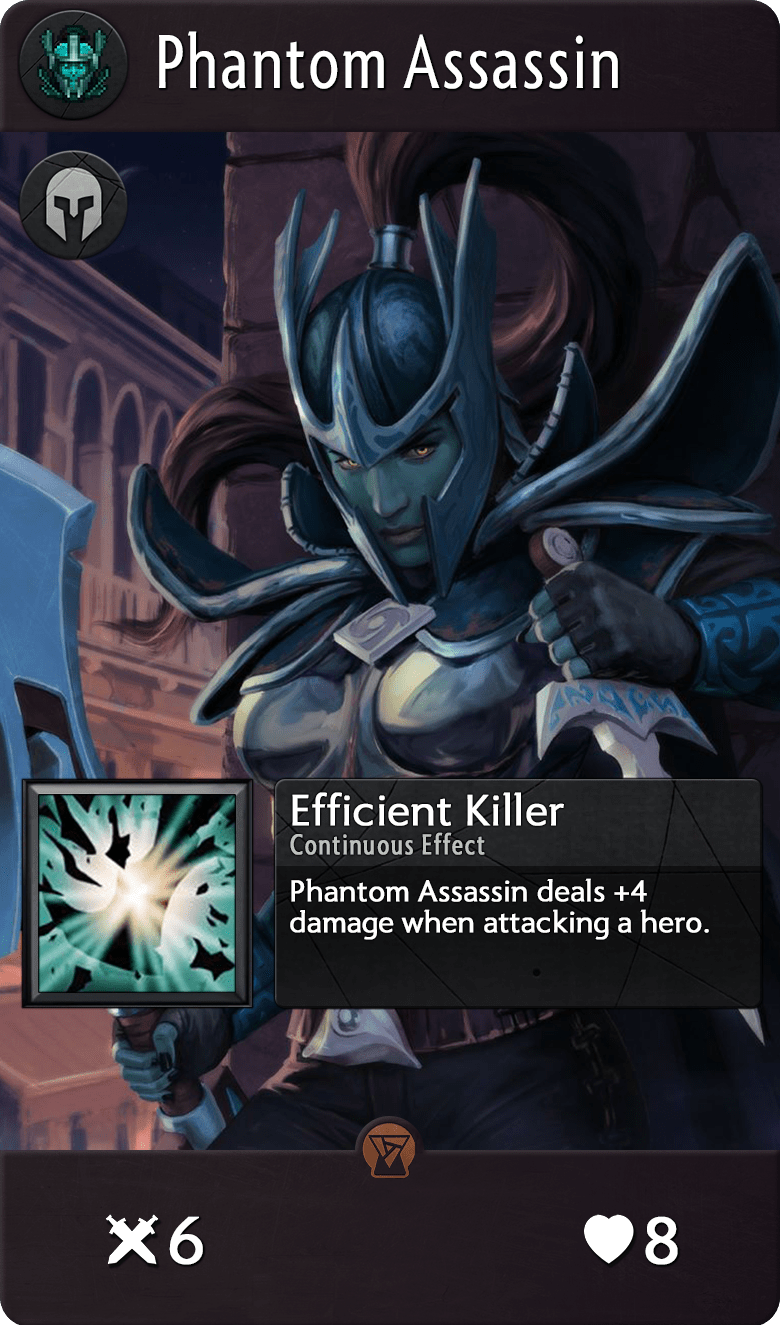 Phantom Assassin is a black hero with 6 Attack, 8 Health and a continuous effect that gives him +4 bonus damage when attacking an enemy hero. This makes him a silent hero killer, with 10 damage in one turn, and if that wasn’t enough, wait till you see his signature spell.

His signature spell is Coup de Grace which is able to condemn an enemy hero after you discard a random card. No matter how many health points an enemy hero has, or how much armor, Coup de Grace is always able to kill him which is why Phantom Assassin is such a highly sought after hero in the game.

Legion Commander is a red hero with 6 Attack, 1 Armor, 8 Health and a continuous effect that gives him +2 retaliate (extra damage every time he gets attacked), which basically makes him an 8 attack hero. She is able to kill pretty much everything in front of him in one turn, except for tanky heroes like Axe mentioned above.

Her signature spell is Duel, which allows you to choose any opponent unit to battle your hero units. Since you should always use Duel on favorable trades, Legion Commander is an excellent board control hero. 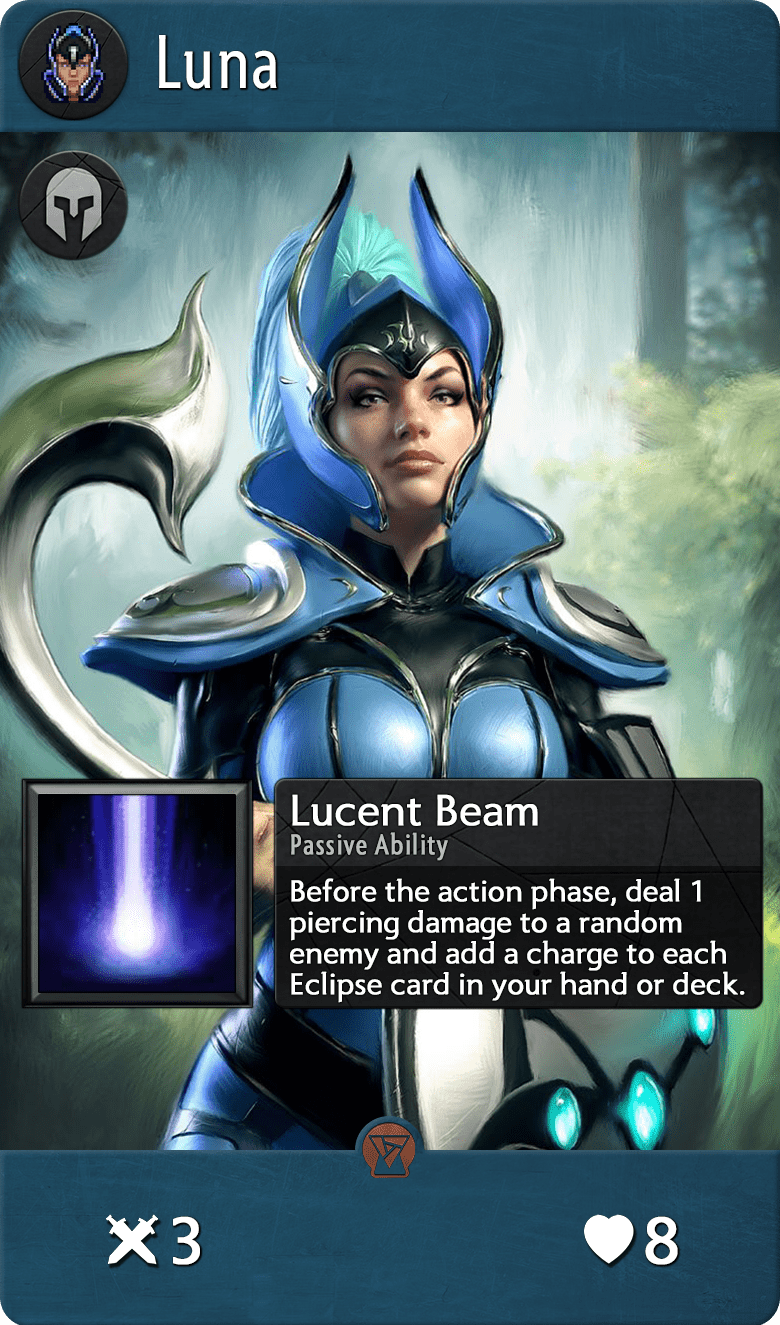 Luna is a blue hero, with 3 Attack and 8 Health but makes up for that through her passive ability Lucent beam that deals 1 piercing damage to a random enemy and add a charge to her signature spell Eclipse before the action phase.

Her real threat is her signature spell Eclipse that deals 3 damage to a random enemy for each charge it collected during the game.  Whenever your opponents see Luna on board, he need to kill it, otherwise she can get out of control. 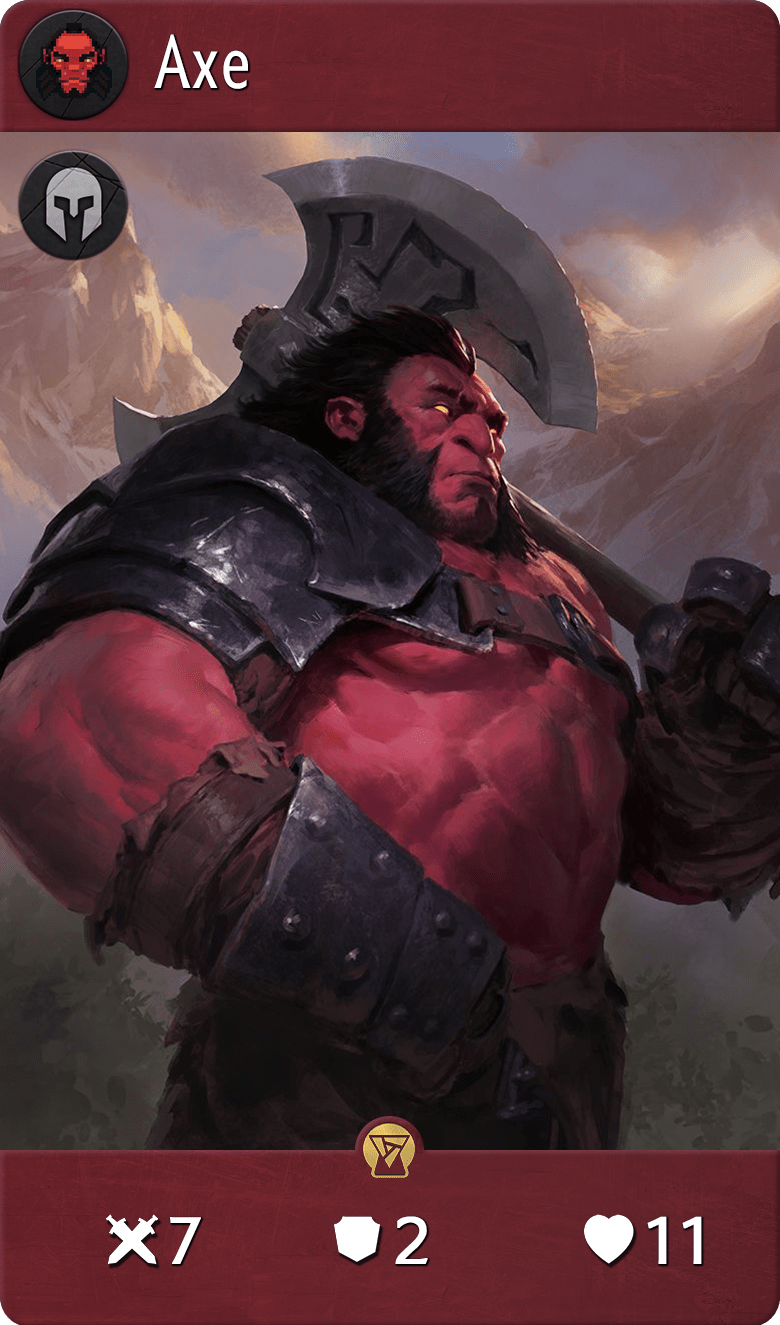 Axe is a red hero, with 7 Attack, 2 Armor and 11 Health. It’s currently the strongest hero in the game due to its massive stats, and a lot of red archetypes revolve around him. The Armor on top of its high health points makes it impossible to take down in an efficient way, so he usually sticks in lane for a long time.

Its signature spell, Berserker’s Call also provides a much needed removal for your deck, especially since your hero can battle 3 opponents at the same time.

Legion Commander is a female