Equip spells have to be the most unsupported spell “type” in all of Yugioh. The few releases we get are either archetype specific or absurdly bad. Thankfully, there are still plenty of older cards that can be effective. Strategies behind these cards can be a bit lackluster, as they can be destroyed easily and they take up precious spell/trap zones. Such disadvantages prevent players from giving equip spells any love.

If you’re making an equip deck, or are simply interested in seeing some cool equip cards – read on!

I’ve read and considered every single equip spell in Yugioh, that are available in English anyway. Using this knowledge, I compiled a list of the 10 best equip spells in Yugioh! 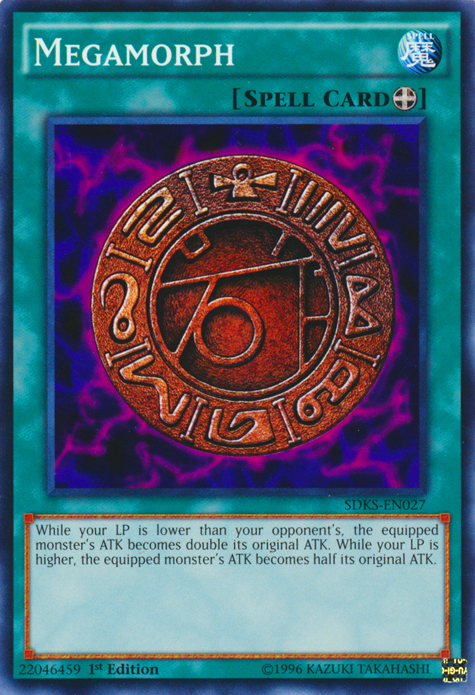 Legendary card, we’ve all used Megamorph at some point in our dueling career. It was incredible in the pre-GX era, giving you huge advantages if your life points are even slightly lower than your opponent’s. In today’s game, it still has a place in certain decks and should be considered if you’re looking for an equip card. Just remember, the ATK increase switches to decrease if you manage to deal a lot of damage with this card.

9. Mask of the Accursed 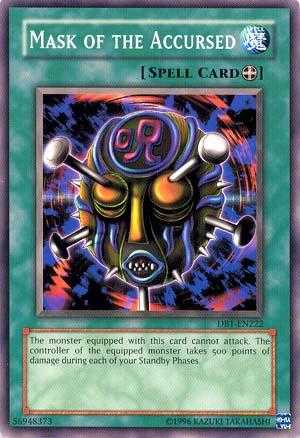 Another classic card, one that incites rage rather than nostalgia. Mask of the Accursed was the bane of many player’s existence, stopping their powerful monsters in their tracks and dealing small amounts of damage every other turn. It still holds up today as well, particularly in stall decks. Stalling to deal small amounts of damage is a surprisingly successful tactic, although it will cause your opponent to hate you! 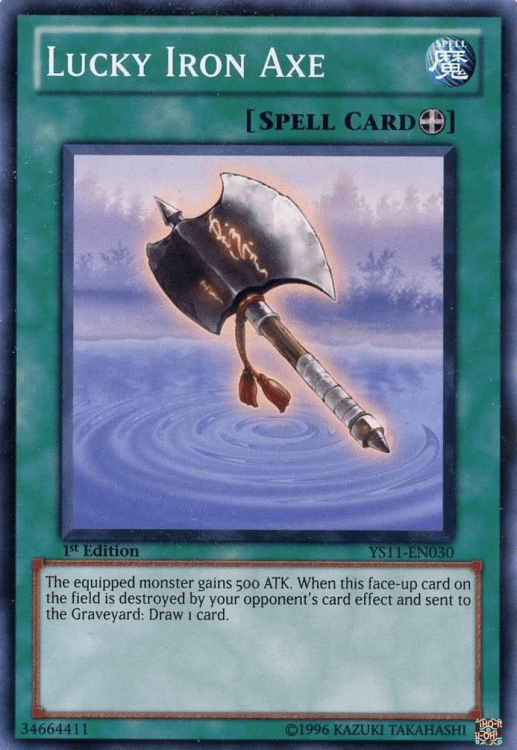 Nice and simple, a small ATK boost while granting a wee bit of relief if it gets destroyed. You can’t really go wrong with the Lucky Iron Axe, it’s a generalist equip card to fit in any deck that requires it. The flexibility makes owning one a must-have, you’ll likely have a couple in your spare cards. 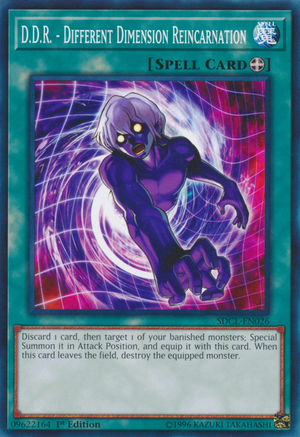 Banishing is all the range these days. With so many monsters being immune to destruction effects, cards that banish are becoming more and more popular. For some decks, cards being banished is absolutely crushing (such as Exodia decks). This equip spell contributes heavily in this regard, allowing you to get one of your banished monsters back. If Different Dimension Reincarnation is destroyed, it doesn’t re-banish the card equipped to it. 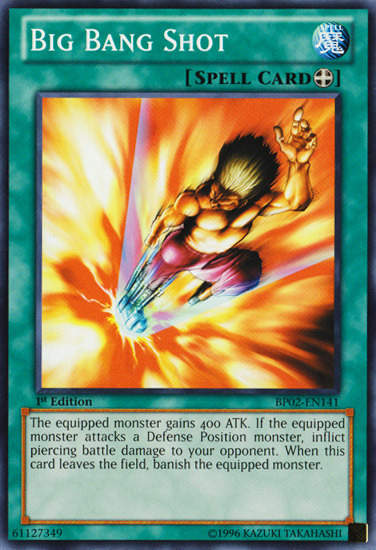 Oh man, this card is so good when combined with some other great equip cards. Sometimes it’s nice to have an option like this, piercing can absolutely win you the game, especially when you’re up against stall/token heavy decks.

If not for Big Bang Shot banishing the equipped monster when it leaves the field, it’d certainly be much higher on this list. 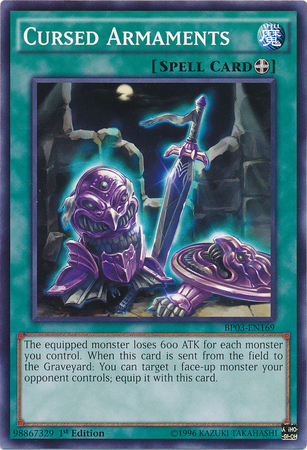 Cursed Armaments is a useful equip spell to help deal with pesky boss monsters or swarming decks. It grants you huge boons in the battle phase, severely reducing the ATK stat of enemy monsters and re-equipping to another monster if it gets removed from the field. If you have 5 monsters on the field, you’ll be able to reduce a Blue-Eyes White Dragon to 0 ATK!

Upon first sight, you might feel like this card only works in stall decks. I can assure you it works exceptionally well in offensive decks too, overall it’s just a great Yugioh card. 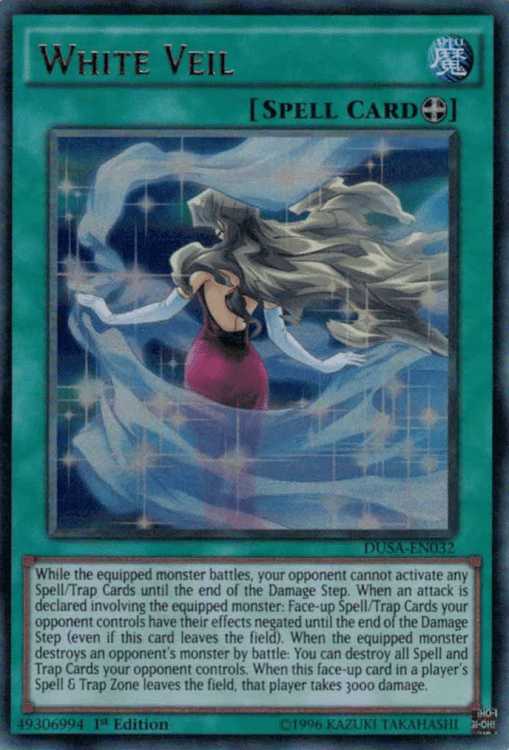 With great power comes great responsibility, you put yourself in a precarious position when playing this card but if used at the right time, it’s potentially game-winning. With its anti-spell/trap effects, White Veil is perfect for taking out those annoying back-rows that plague the majority of decks. Of course, taking 3000 damage when it leaves the field is a huge risk, one that’s well worth taking if you see a good opportunity! 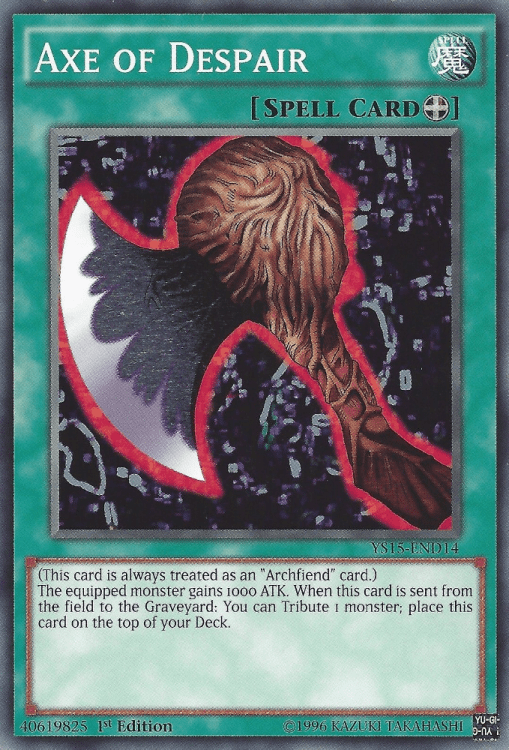 One of the highest ATK giving equip cards is the Axe of Despair, ever-reliable to give you the boost you need. If required, you can sacrifice a monster to add it to the top of the deck when it gets destroyed, although that’s rarely worth it.  No doubt you’ve encountered this equip spell many, many times. You know how strong it is, Axe of Despair should be in any deck that requires equip spells (except archetypes of course). 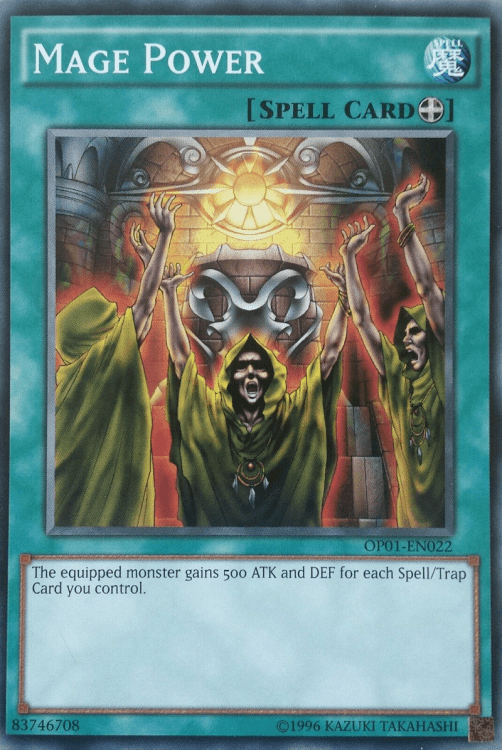 Providing up to 3000 ATK/DEF (5 spell/trap zones + field spell) cannot be understated, Mage Power will give your monster the strength it needs to overcome almost anything in battle. The lowest amount it can provide is 500 (from itself) so it is a great alternative to pretty much all of the previous entries. Some say you get a huge burst of nostalgia when this card is played! 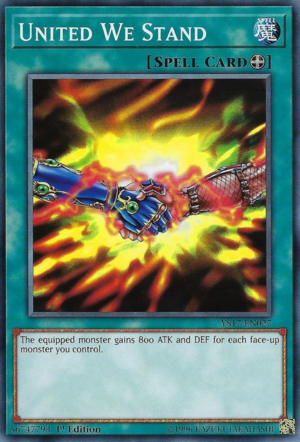 United We Stand takes the number 1 spot for the sheer amount of ATK/DEF stats it provides. Seriously, up to 4000 extra ATK/DEF is absolutely ludicrous. This is just from a single equip card, imagine combined 3 of these cards with 2 copies of the previous entry. That’s potentially up to 17000 extra ATK/DEF. Insane, this card definitely deserves to be called the best equip spell in Yugioh!

What about power of the guardians?