Magic is a huge part of the Elder Scrolls: Skyrim, whether you practice it or not. You’ll regularly encounter enemies who can wield powerful spells in an attempt to kill you. Of course the Dragonborn does not concern himself (or herself) with apprentice mages but it shows the variety magic available. One of the many spell sets is Destruction, a collection of spells you can use to deal heavy damage to your enemies. These spells come in all shapes and sizes but not all of them are worth using. To help you figure out which spells you should be using, here’s the top 10 best destruction spells in Skyrim! 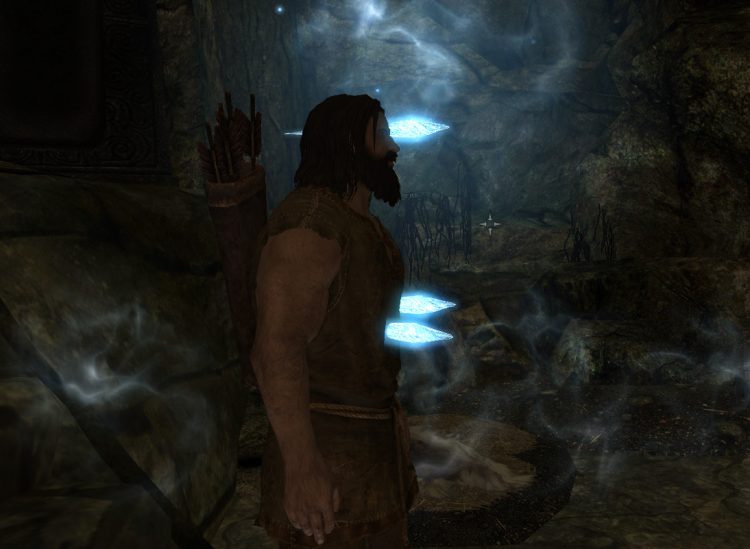 One of the most known spells, Icy Spear fires an icy projectile towards the targeted location. It deals decent damage to both Health and Stamina, making it a good spell to use in combat. It can be fairly difficult to land though, especially on small or fast moving targets. This is largely why Icy Spear only manages to get to 10th place on the list, plus the fact it’s an Expert level skill so it can be a challenge to unlock it!

Obtaining Icy Spear is actually quite easy though, it’s just getting to level 75 in Destruction that can be painful. You find this spell as a skill book in chests, or by visiting Faralda at the College of Winterhold. 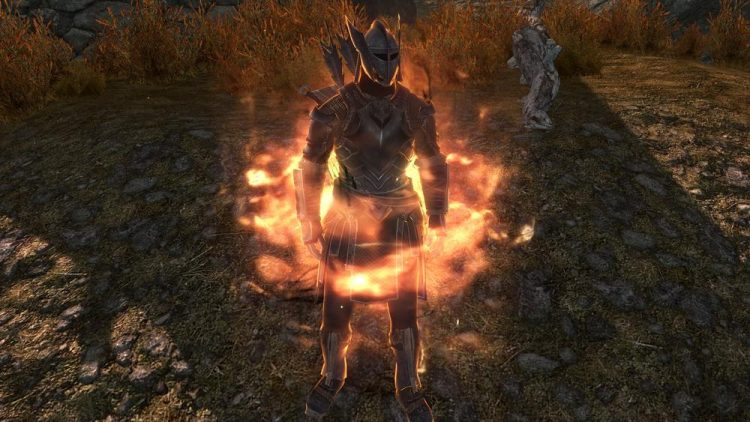 Absolutely perfect for battle mages or even melee fighters, Flame Cloak surrounds your Dragonborn with a powerful aura which burns nearby enemies for low damage. It doesn’t seem like much but the spell last a good minute and over the course of a fight, it can deal serious damage. If the target is already on fire, they’ll take even more damage. It’s only an Adept (level 50) skill too, so you’ll be able to use it quite early on. It’s similar to Icy Spear in the way that it can be obtained via chests or by Faralda. 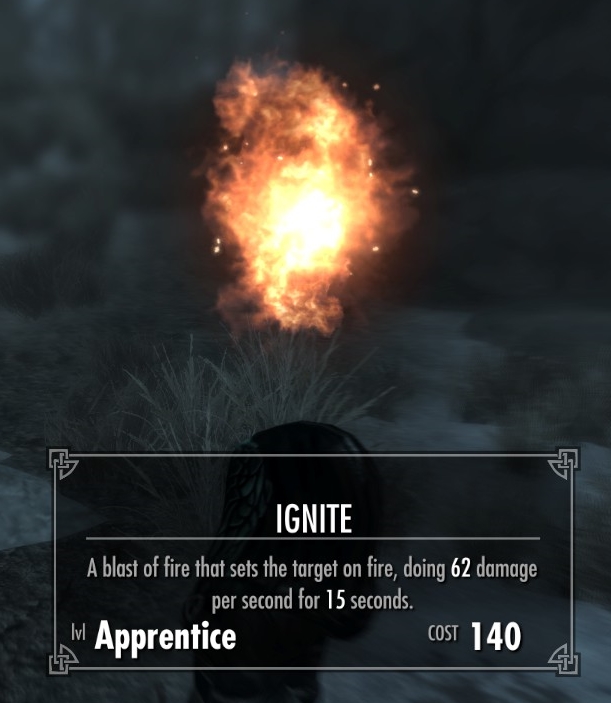 Combine Ignite with Flame Cloak to melt opponents and boost your destruction level considerably. This spell shoots a projectile bolt of flame at an enemy, setting them on fire for low damage. The spell lasts a good length of time though, so you can use other spells to amplify damage or simply run away as they burn to death. As an Apprentice (level 25), you’ll be using Ignite from a low level, it’ll likely be your main source of damage for a good while. 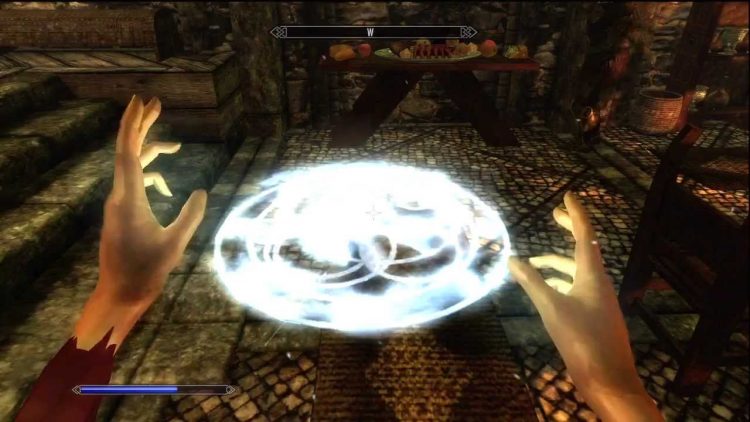 Another Apprentice level spell, Frost Runecreates a trap on the ground that explodes when an enemy comes nearby, just like Lightning & Ash runes. The reason this makes the list over those two is the fact that it slows enemies it affects, making it ideal for kiting or ambushing. As expected, this spell is also available from Faralda. 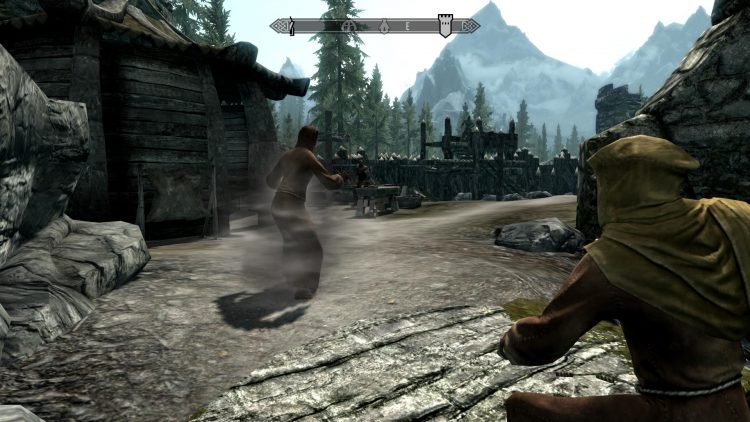 As hilarious as it is powerful, Whirlind Cloak should be utilised by any destruction mage. Upon cast, it surrounds the Dragonborn with a whirlwind that has a chance of hurling any melee attackers away. Just like Flame Cloak, this also last 60 seconds. This spell is likely best for battle mages as full mages will keep their distance, it’s an Adept level skill that can be obtaining by purchasing the tome from Talvas Fathryon. 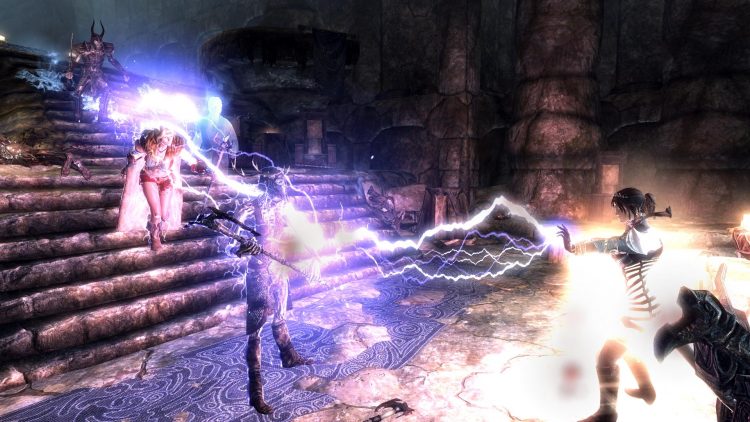 Chain Lightning is an incredible area of effect spell that can take down entire groups of enemies quickly. Upon cost, it shocks the target and then bounces to any nearby enemies. It’s particularly useful for those dungeons that think a horde of skeletons will last longer than 5 seconds against you. It also hits the magicka stat, making it a good choice against groups of spell users. Don’t worry about accuracy, the spell can bounce to targets even if it misses, it can make for some cool moments when shooting around corners.

As an Adept level skill, it’s not even difficult to obtain and it’ll make your adventures much easier! 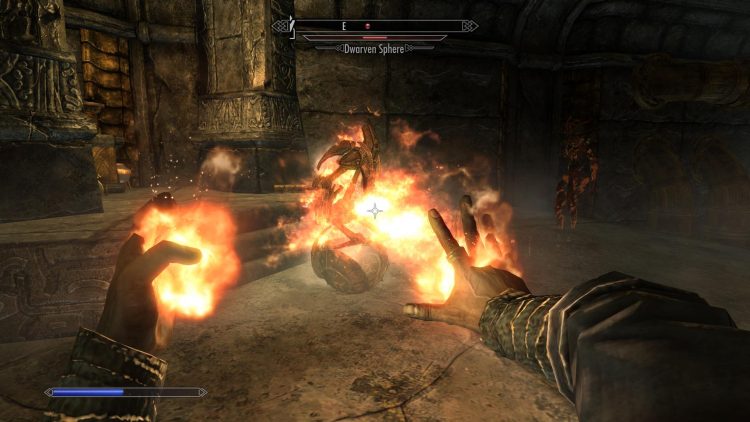 What? Isn’t Flames a starting spell? Why yes it is, which is precisely why it gets so high on the list. It does low damage but the magicka consumption is also low, so you can keep firing flames at your enemies to boost your destruction skill efficiently.  Of course you won’t use this spell once your destruction level starts to get respectable but in terms of helpfulness to your destruction progress, it’s one of the best spells in the game!

Any of the wall spells are absolutely incredible, they have to be if they’re an Expert level skill, which requires a rank of 75 in destruction. Casting any of them on the ground will produce a wall which, upon an enemy moving through it, deals heavy damage. Combining this with a skill such as Chain Lightning ill delete large numbers of enemies completely, it’s ludicrous how effective these spells are. 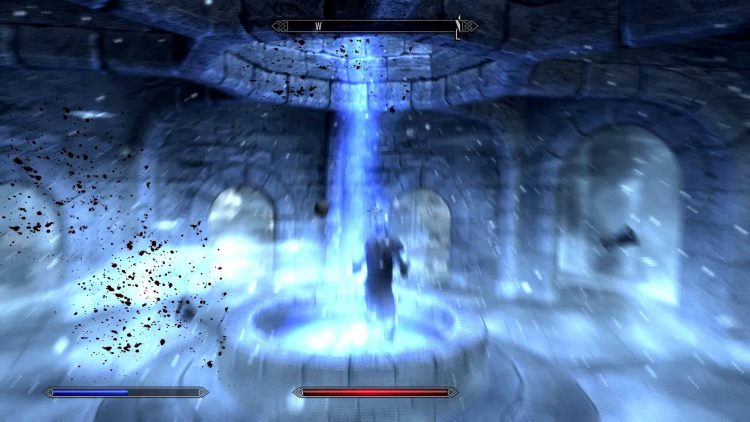 Now we get to the most awesome stuff, one of which is the Blizzard spell. After a rather long charge up, the caster summons a huge storm of ice to engulf everything in a large area. Heavy damage is dealt to any who are unlucky enough to be within its radius, movement speed and stamina are also deeply affected. However, it does deal damage to the caster too, so make sure you bail out of the area as soon as you can. As you’ve likely guessed, it does require the caster to be a Master (level 100) of destruction! 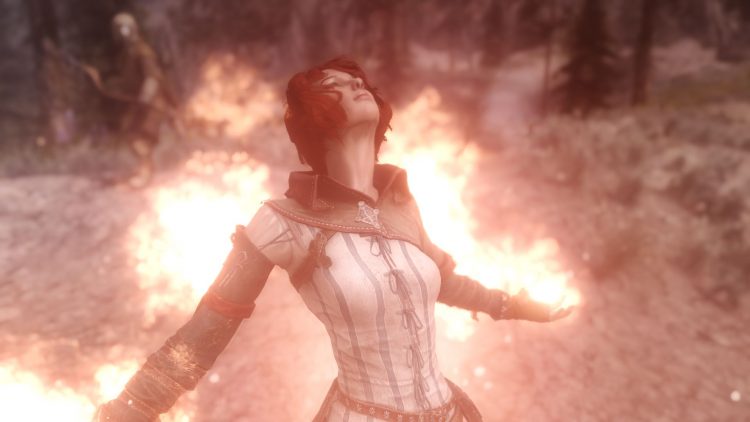 Who would have thought there are nuclear warheads in Skyrim? Fire Storm is basically a nuke, like Blizzard it does require a charge up but oh boy, is it worth it. It instantly deals exceptional damage to all enemies in its radius, Fire Storm is capable of completely clearing out any nearby opponents. Even though it’s a Master level spell, it can be obtained by completing a quest, so you’ll have it in no time. Go get this spell and enjoy committing mass genocide!

I agree for the master spells Firestorm and Blizzard, it's rubbish ! Why the f*ck we have to cast Master spells for so long ? Impossible to use that in fight with allies or passive mobs, you will hit it too !

But what about Ice Storm ??? It's an Adept spell so it's easy to get and with the impact perk, if you throw it by two hands, it will stun opponants in a large straight line (so you will rarely miss your opponents, you will manage a group of ennemies and they will not longer run to you because you will melt their stamina !

I don't use it against wizards where i prefer chain lightning to melt their magicka.

What a misguided list! Did you ever play that game? Firestorm and Blizzard are total garbage. If you try to use them you quickly realise, that you have to go into the middle of the enemy an be helpless for about 3 seconds. Even if you survive this, there has to be just a small obstacle like a table to block the AoE Dmg of the spell. The only useable masterspell is Lightningstorm with the same problem of being helplessly unmovable.

The best spell is chain lightning with the impact perk. It's a shame that no such handable masterspell with decent dps is available.

SKyrim requiers dedication for levelling. I wanted a mage charavter, and so I let her use ONLY destruction from the very start. It takes completely different tactics, slower more careful tactics especially in robes, but it works great and is alot of fun. I reached 100 after about half of the major quests. Then I went for conjuration and started using ONLY conjuration and it wasn´t long til I was 100 (with some carcass-soul trap sessions on the side :) ).

So go with ONLY magic, and you will level well. Destruction rules!

What kind of armor/costume that used in forestorm image ? I love it

Hey. It's Triss Merigold's armor based on The Witcher 2 game, so it kinda fits the fire sorceress theme. You can try to look for it on NexusMods. I know they had that mod for Oldrim, and the armor was craftable as well. Don't know about SE though, so look it up.

Yes, I agree, being a mage really su..s and it's due to slow progress of magicka branch and it's fast consumption, but I must say by being a mage and using spells you can simply enjoy the pure beauty of Skyrim, lightning effects, firing hands and making the dead enemies fight for you, these are things that being a mage offers. Now as a mage you are extremely vulnerable and die quickly! What should I do? You may ask, well this is completely rational that mages die easily, but what if you have some battleworn maidens? It's your lucky day! there's a mod that allows you to have more than one follower and again it is totally rational, so install that mod and become a mage with influence and bodyguards, just remember not to have more than three followers at the same time cause you'll ruin the fun. Anyway even if you have a group of followers more than three, you look more like party crashers and it's a hard thing to manage your entourage.