Lets face it, the old Warhammer Fantasy world has gone. While it had a ton of substance, new players were often put off by the plethora of information you had to learn, as well as the prices behind all models.

Games Workshop have looked to increase new player retention rates in the form of Start Collecting boxes. These sets include a multitude of high quality units, feature massively reduced prices and include easy-to-read guide booklets.

Rankings will be determined by several factors. The most important being what a box offers to new players, such as accessibility and upgrade potential. You want to make an investment like this to get yourself introduced to the hobby. Which means getting a good army built and painted for as low a price as possible! 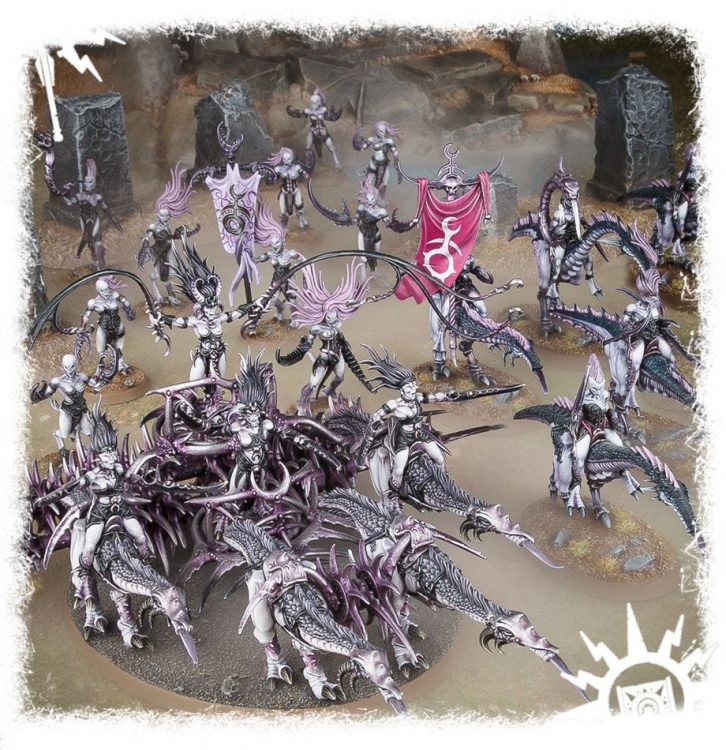 Providing a hugely mobile small force is the Daemons of Slaanesh Start Collecting box. All units included have great mobility, with the Chariot and Seekers being cavalry, as well as the Daemonettes being able to run AND charge in the same turn!

Chaos Wizards are able to summon Daemonettes, so obtaining this box can give you more options for other Chaos based builds. With so few colors needed for the entire army, painting all models doesn’t take much time. This box is perfect for players struggling to paint, especially highlighting.

A lack of model value really hurts this set’s viability compared to other Start Collecting boxes though! 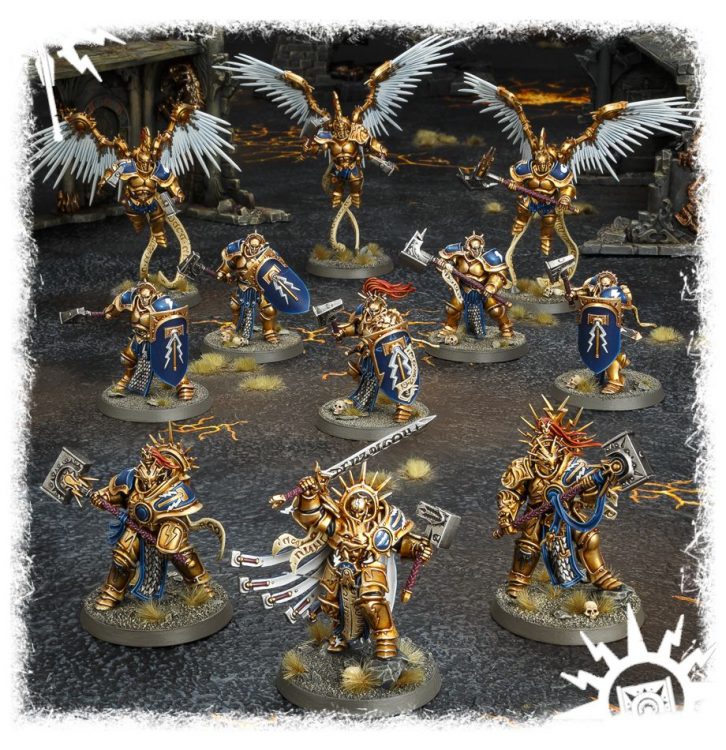 Essentially the main good guys of the Age of Sigmar universe, Stormcast Eternals are easily the most newbie friendly. Power-wise they’re lacking in variety, as the flying Prosecutors can be taken down by targeted ranged fire.

Each Eternal fights with the strength of 2 or 3 men, so a group of 5 Liberators are a lot more intimidating than they look. The Gold/Blue color scheme looks cool and is easy to paint, although you can choose whatever colors you like. 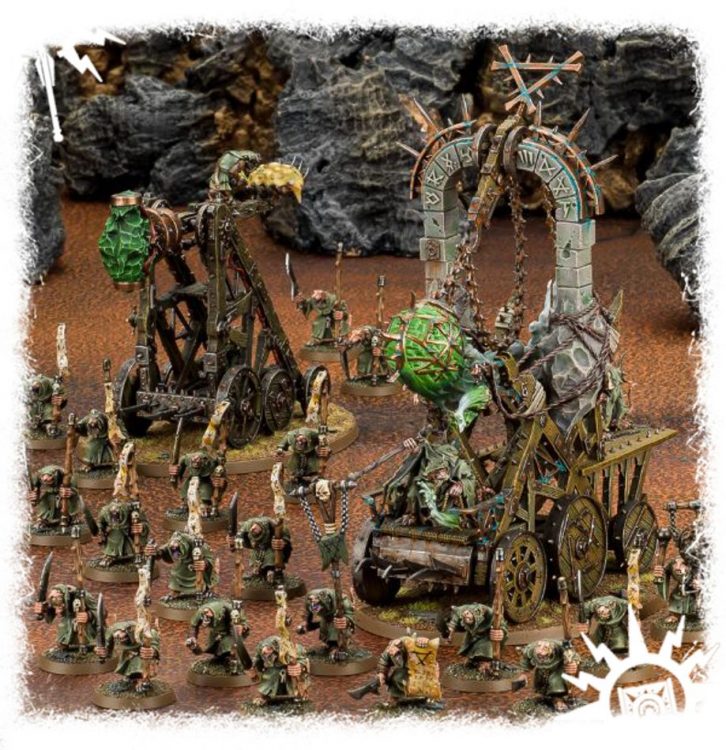 Plague Monks are pretty damn awesome infantry units, able to wield 2 swords or a sword and stave. Each unit will contain a Plague Harbinger, granting disease buffs to all models, further increasing their potency in melee combat.

With 12 wounds, the Plague Furnace takes a huge beating, slaughtering dozens of enemies and spreading toxic fumes before it goes down. The Plagueclaw artillery unit offers the ability to hit targets it doesn’t even have line of sight on, which is a huge boon compared to other artilerrt units.

A big problem, at least for new players, is the difficulty of assembling and painting all of the units. You really don’t want to get it wrong, the Plague Furnace alone is £37.50 on the Games Workshop site. However, if you have no problem in this regard then the Skaven Pestilens box is right up your street! 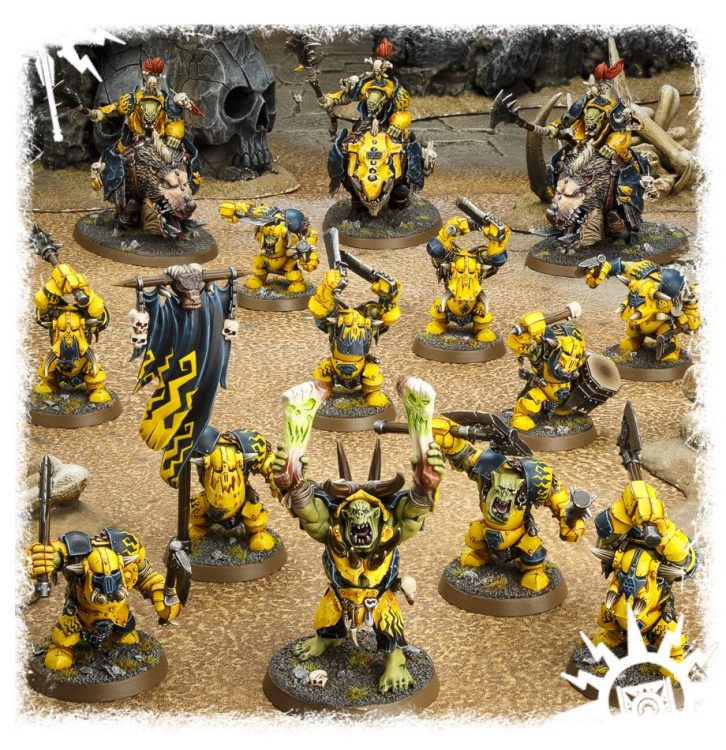 Formerly known as Orcs, the newly branded Orruks are as hard-headed as their previous kin. Able to withstand a ton of damage while also hitting like a truck, you’ll choose Ironjawz if you enjoy a reckless playstyle. The 3 Gore-Gruntas included are worth nearly as much as the entire box on their own. They’ll be your main offensive unit, with a myriad of attacks available and nice mobility.

A long-range charge from a unit of Orruk Gore-Gruntas will cleave through almost any non-hero unit in the entire game. Having a Warchaner and 10 ‘Ardboyz to back them up is even better! 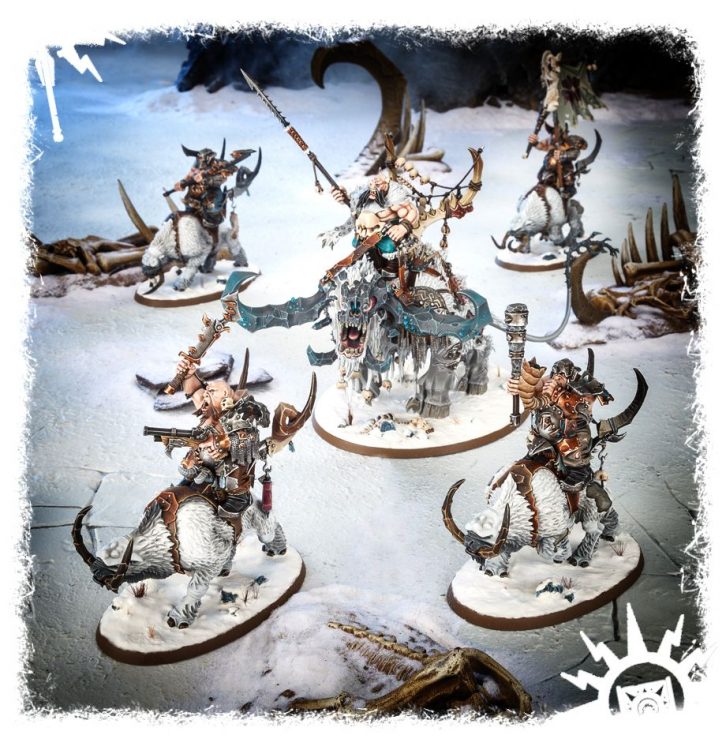 Ogors tend to have a much lower model count due to their size, I don’t think the featured image does them justice as each of those models are massive. In battle, the Stonehorn attacks with horns and hooves, outputting significant damage, enough to destroy entire units of infantry. 13 wounds and 9 bravery allows it to stay in the fight indefinitely, especially when you consider its Stone Skeleton trait halves any damage it takes!

A Mournfang pack is just as devastating, carrying ranged missile weapons for additional flexibility. Painting this box of units to a good standard is very, very difficult though. Using them in battle can be really confusing too, as managing line-of-sight and movement requires the experience of an expert. 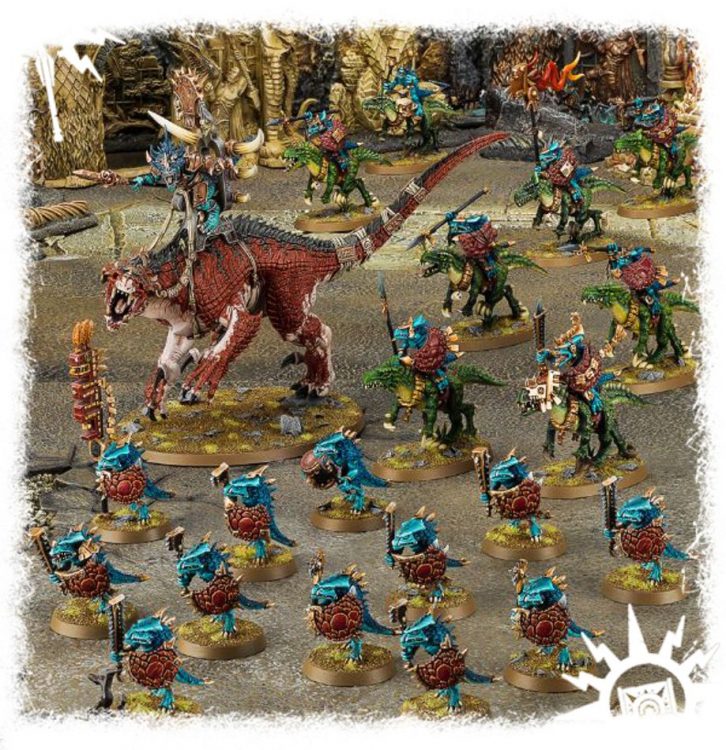 Providing the most value for money so far is the Seraphon box, giving you an enormous 21 models. Saurus Warriors act as a front line meat-shield unit, taking most of the attention away from your Carnosaur and (hopefully) flanking Saurus Knights. Unlike most infantry units, Saurus Warriors have 10 bravery and even a 5+ save, making them surprisingly tanky.

They don’t deal much damage though, but that’s where the Oldblood on Carnosaur comes in. Utilising a number of traits and abilities, an Oldblood can use his Carnosaur to rip enemy monsters to shreds. Capable of also running/charging after slaying an enemy, it can roar to strike fear into the hearts of all enemy units around it that are already wavering.

In terms of painting, there’s no strict color palette or appearance thematic. You have complete freedom when it comes to choosing scale color. 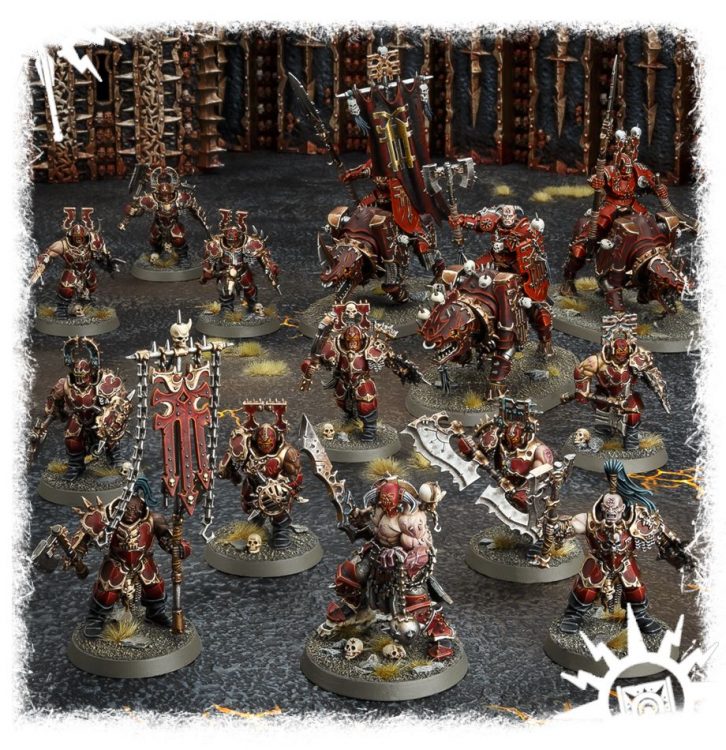 A Slaughterpriest is half-warrior, half-mage. Capable of dueling against other heroes or face-tanking units of infantry, he can pray to Khorne for powerful spells.

Mighty Skullcrushers wield shields that offer a 4+ ward save on any spell damage, even those that mortally wound. Their Murderous Charge ability is pretty insane, capable of utterly deleting any units around them after a successful charge.

Blood Warriors have 2 wounds each, surprisingly good for dealing with monsters who deal small amounts of aoe damage.

Very nice value with a mixed unit variety, simple color scheme and great upgrade potential means the Khorne Bloodbound box is one of the best available. 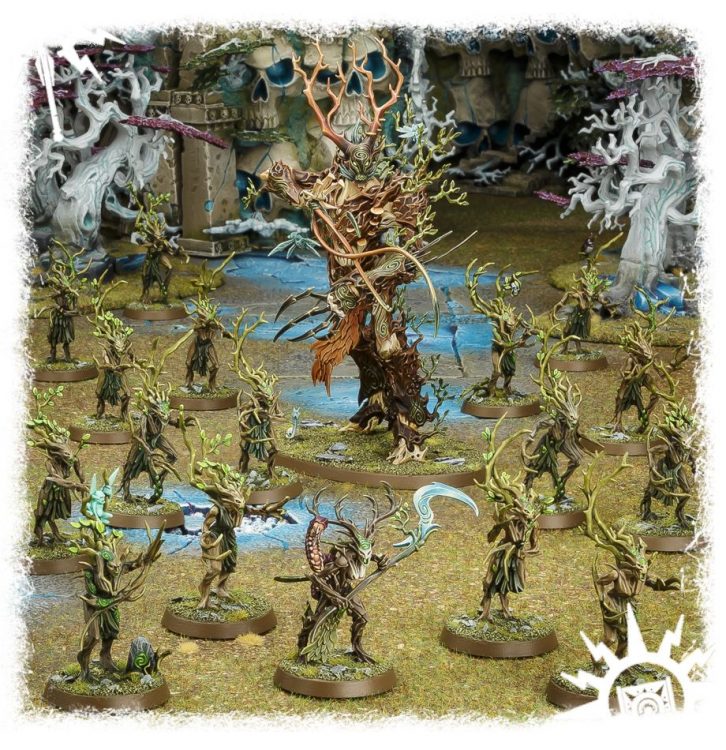 Sylvaneth (previously known as Wood Elves) are incredibly tough to beat. Treelords in particular can seemingly solo entire armies, as they refuse to take damage while stomping several enemies.

Sporting a steamroll playstyle, a herd of Dryads charging at you with a Treelord behind them is very scary indeed.

I’m not gonna lie, these models are some of the most difficult to paint in the entirety of Warhammer. There’s so many colors involved to get them looking decent, with so much detail on each model. I’d actually recommend out-sourcing this part of the hobby if you’re a bad painter. 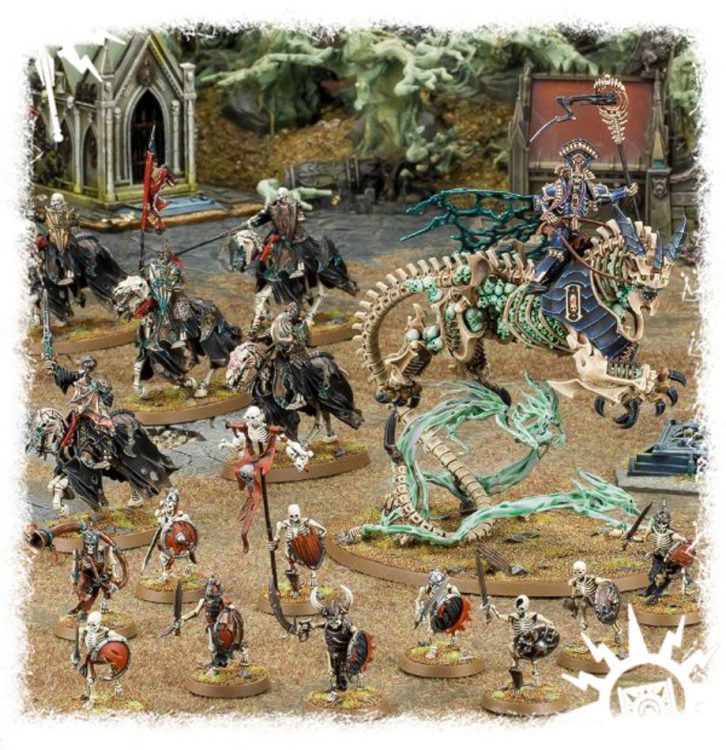 If you want an undead army, focused on calling upon dozens of weak undead infantry units then you’ve come to the right place. Arkhan the Black will be your go-to commander, wielding 2 named melee weapons with 11 wounds, 10 bravery and even a 4+ ward save. Additionally, he has a many spells available to him ,just take a look at Arkhan’s Warscroll.

Aside from Arkhan, you’ll find this box to be easy to paint, you could do them all in one sitting. After that, it’s just a case of adding more and more undead units!

Skeleton Warriors are pathetic of course, acting as meat shields with a 6+ ward save as their only shining light. 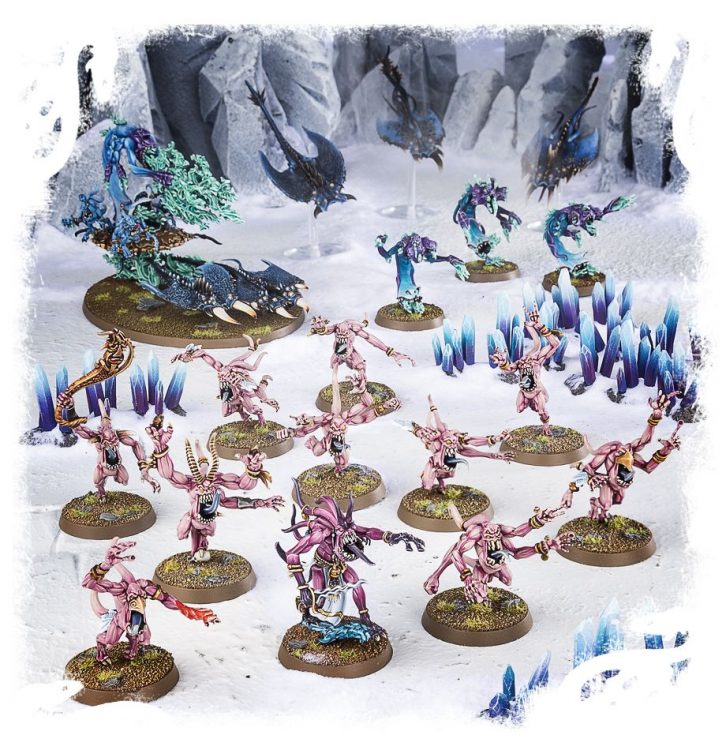 Such epic value for money, providing plenty of different models of varying power levels. All of them have decent mobility, have bizarre attacks and spells to cause all kind of mischief.

Tzeentch has released plenty of horrors in recent months, with bosses like the Lord of Change already being in the roster. There’s so much choice, you’ll never get bored of this army type.

Many players are turned off by the appearance of Tzeentch’s creations and for good reason, they’re disgusting. If you find them too ugly, don’t bother with them, even though they provide so much value.