Age of Empires 2 is strangely still going strong after all these years. For many, it’s a huge source of nostalgia, a history lesson and a fun game to boot.

For others, Age of Empires 2 is a significant competitive game that should be taken seriously. Regardless of why you play, knowing the best and most fun maps is mandatory.

These maps are the best due to multiple reasons but overall, for the general player, they should be playing them the most.

This map is great because the only water source is slap bang in the middle of the map with the players on either side. This river is a natural defense with just a single river path connecting the two sides. Players must find this path and fortify it before their opponent can use it. Control of the water is also important as the fish provided is a great source of food.

A large ocean surrounded by land, this map provides awesome land and naval warfare. As players fight for control of the water, they must also look out for flanks and land invasions. It’s quite easy for a player to fortify both flanks with walls and towers, even more so for a team. This map provides a good all-round balance of the different types of strategic warfare.

Players start this map surrounded by the usual resources, there’s a few brackets of wood surrounding the Town Centers but the main sources are towards the center. There is a small river at the center of the map which is surrounded by large forests. You get plenty of time and resources to build your base at the start but you need to look towards the middle once your local resources run dry. This map provides a different kind of playstyle as you need to defend both your base and your forward base at the center. 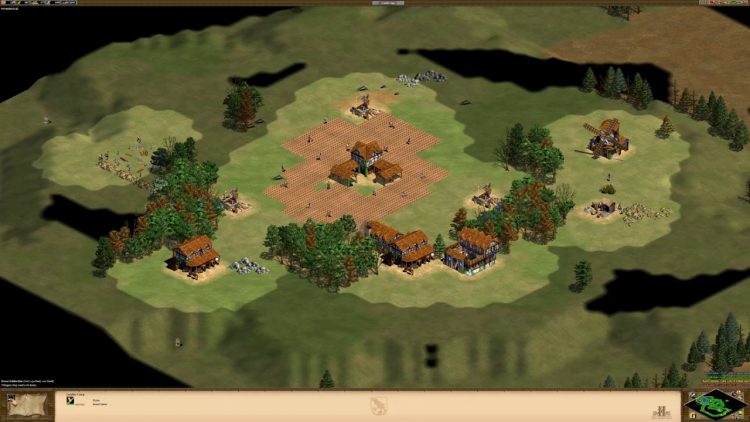 Once a community created mod, the MegaRandom map is now part of the Forgotten Empires DLC. It is how its name implies, it generates a completely random map that does not fit a particular ‘theme’. The brilliance of this is incredible as you’ll never truly know what’s coming, giving a surprise to all players and this makes MegaRandom really fun to play.

Perfect for newer players, Arena has open land in the middle which is surrounded by large forests. Players are given a Stone Wall around their base to start off, allowing for new players to build their base without getting destroyed and some great seiging action later on in the game. The forests surrounding the bases provide the players with a ton of resources which, again, is perfect for new players. It’s a great map whether you’re an expert or newbie.

This map is generated as a desert island with plenty of resources littering the place. The fun lies with the special rules as players start with just 3 villagers that are dotted in random locations. They must find a suitable location to build their base, it’s a race for time as the players quickly try to find the best place to drop their Town Center. This map is not recommended for new players but it’s highly popular with established players.

It’s as simple as it sounds, each player (or team) is given their own island which they must build their base upon and protect from invaders. Mostly focusing on naval warfare, water control is absolutely crucial because if you lose the water, the enemies have free reign over when and how they can land their armies on your shores. The player must build suitable docks and protect them effectively to have a chance. This high level of macro play is popular among all players as it’s great for learning but really fun for those who already know the basics.

Mostly seen in pro play, Arabia is arguably the most well-balanced map in the entire game. Resources are modest but you still need to manage your economy properly. There is no water so it’s all about the boots-on-the-ground warfare. Wood especially is difficult to manage as there are no big forests, just small brackets here and there. It’s one of the best tactical maps to play and awesome to watch pro players duke it out.

Similar to Arena, Fortress provides the players with Stone Walls, a Barracks and even 4 Watchtowers from the get-go. Early aggression is definitely not advised, you need to build your base faster than the enemy can build their base, then attack when the time is right. There isn’t much resources in the starting base which means players have to go out into the wilderness to get what they need, this makes raiding a viable tactic. You can also just turtle up and laugh as you repel attack after attack. This is a very fun map to play.

Couldn’t really be anything else, could it. Black Forest is legendary among all Age of Empires 2 players for being the best, most fun map to play.

You are given great natural defenses as almost the entire map is covered in trees, this provides a huge amount of resources, way more than you can actually use unless the game lasts for many hours.

This map is spot on for new players as they learn to build, fortify and attack. Experienced players also love this too as the paths connecting the bases provide a fun and unique experience that you can’t get on any other map.