Almost every Minecraft player will have a server or single player world that they use to erect their greatest builds. I have one too, specifically a server that I have spent months building. My builds won’t be the greatest of all time but I’m proud of them considering my in-experience. For those that are interested, here are my 10 best Minecraft builds! 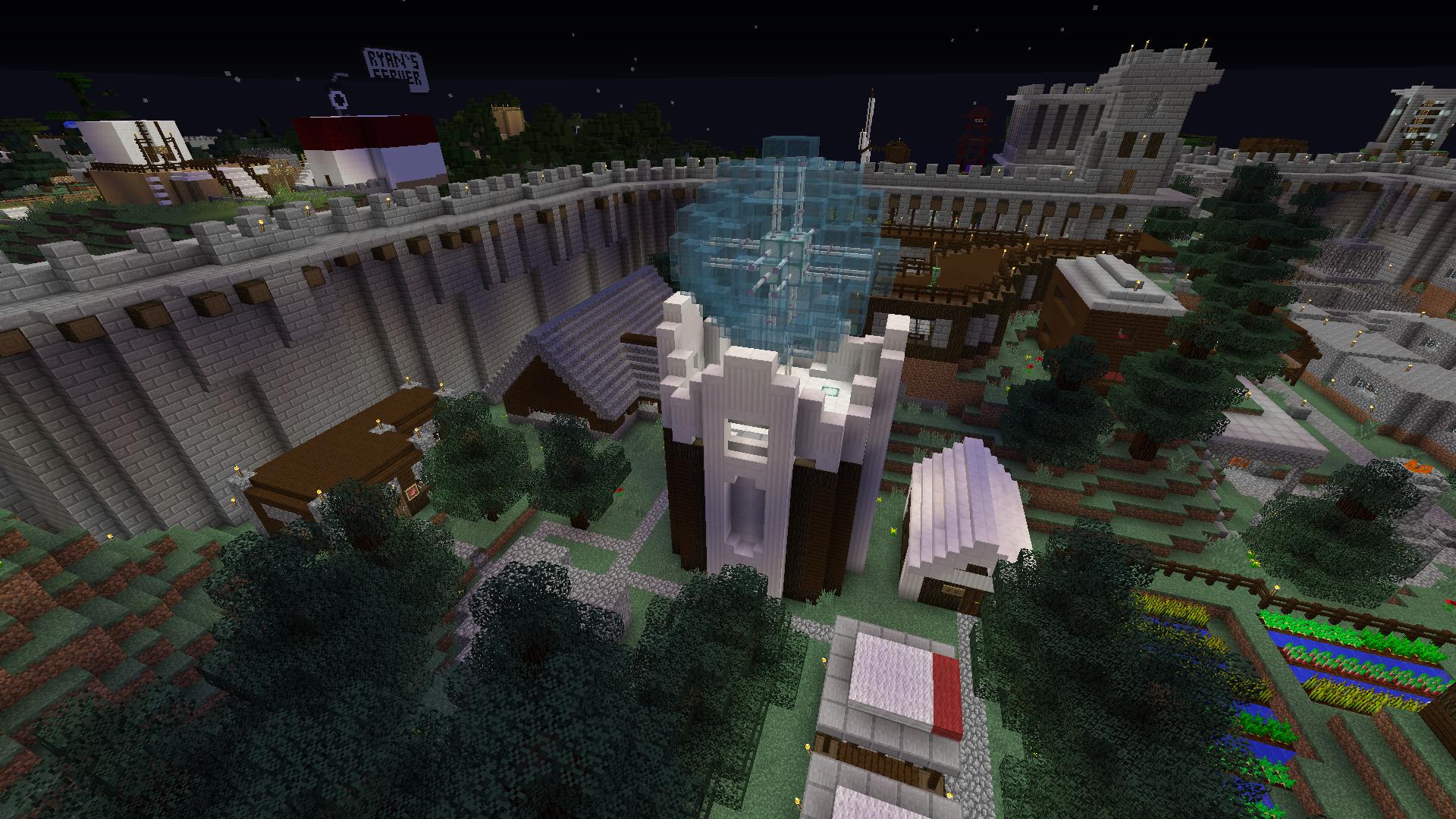 The Consortium Tower is one of the few places of magic in my Kingdom. The orb it holds attracts magic which the staff use to power some parts of the Kingdom. It is made with a variety of Quartz blocks as well as some Dark Oak Logs. The Orb is a simple sphere made from Light Blue Glass blocks. It contains 4 Lanterns inside which connect to the orb via End Rods. 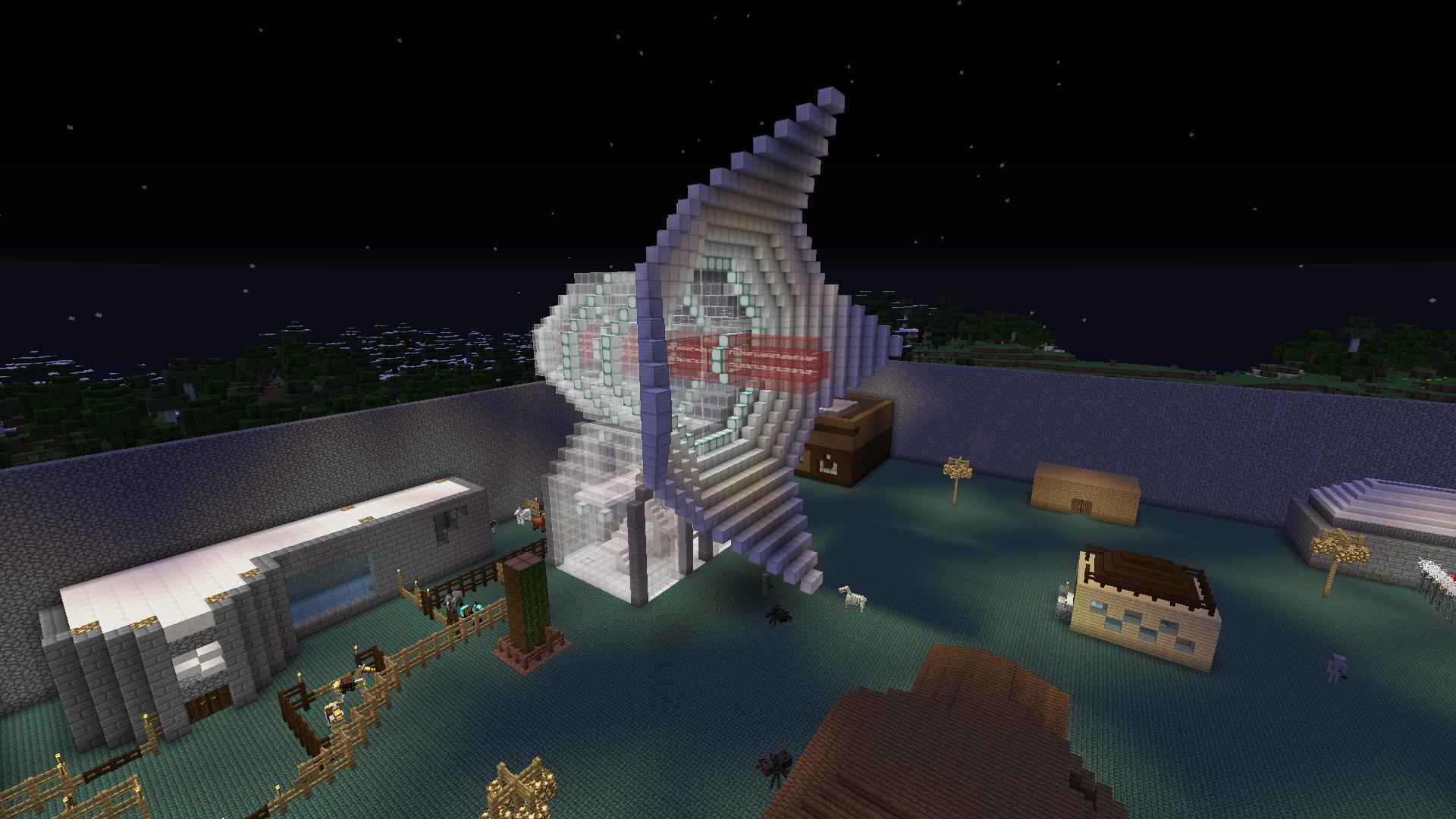 This build took a very long time but I think it looks awesome. It’s called a Biome Destroyer as it’s supposed to be high-powered laser that nukes entire biomes. It is built mostly with Glass blocks with some Lanterns to illuminate it. The laser is built from Red Glass blocks with End Rods in the middle. The outer ring is made from Iron Blocks but also looks fine as Glass blocks. 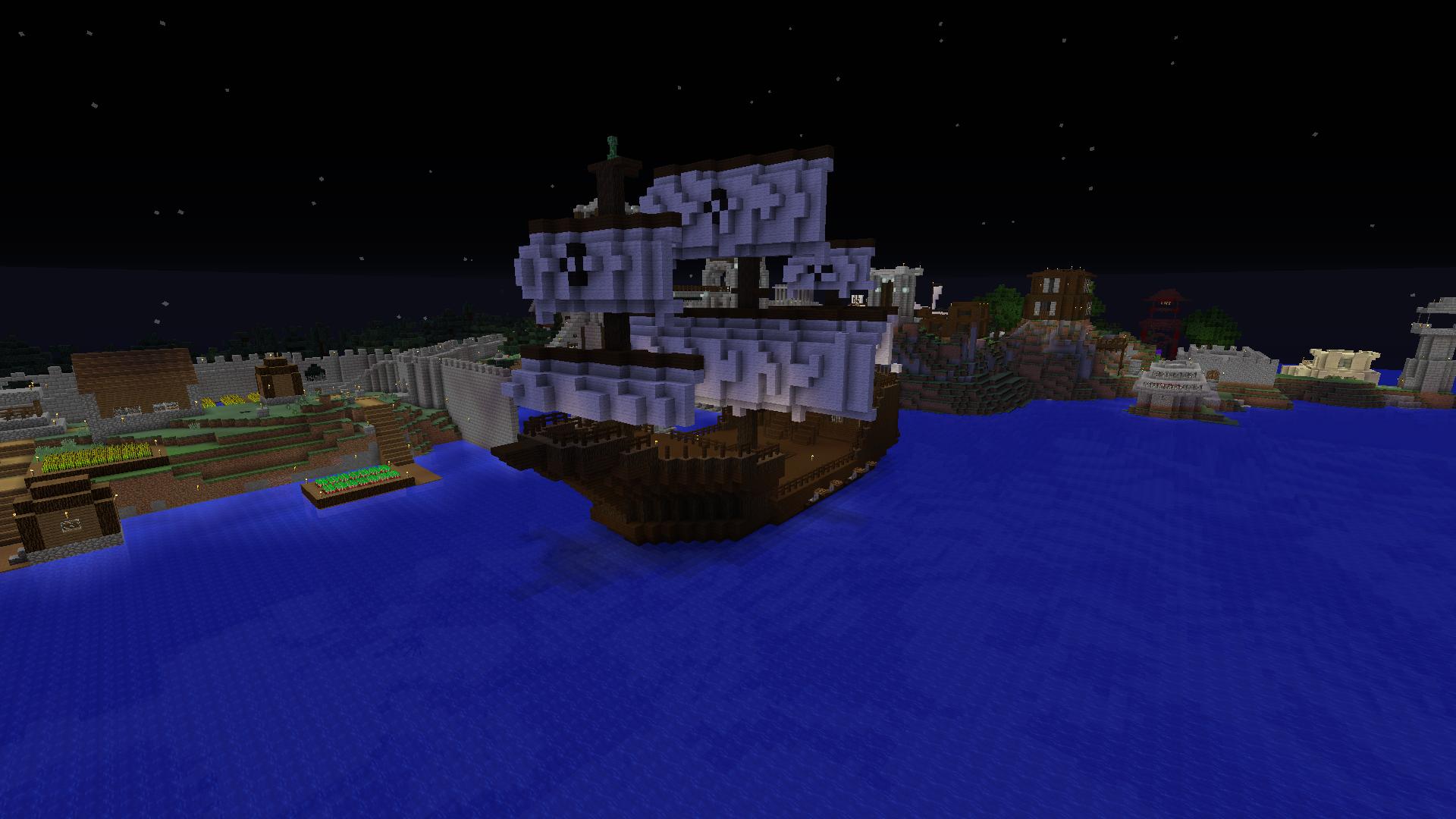 You can probably tell this is the first ship I’ve built freehand. It matches the color scheme of the Kingdom by adopting Dark Oak as the main source of wood. This alone took a few weeks to build as certain parts were constantly revised. In the end it’s still a single block wider than expected but it’d be way too difficult to change, in fact I’d be better off making another warship.

For the Kingdom, this ship is the only armed vessel. This is tasked specifically with defending the dock and nearby seas. 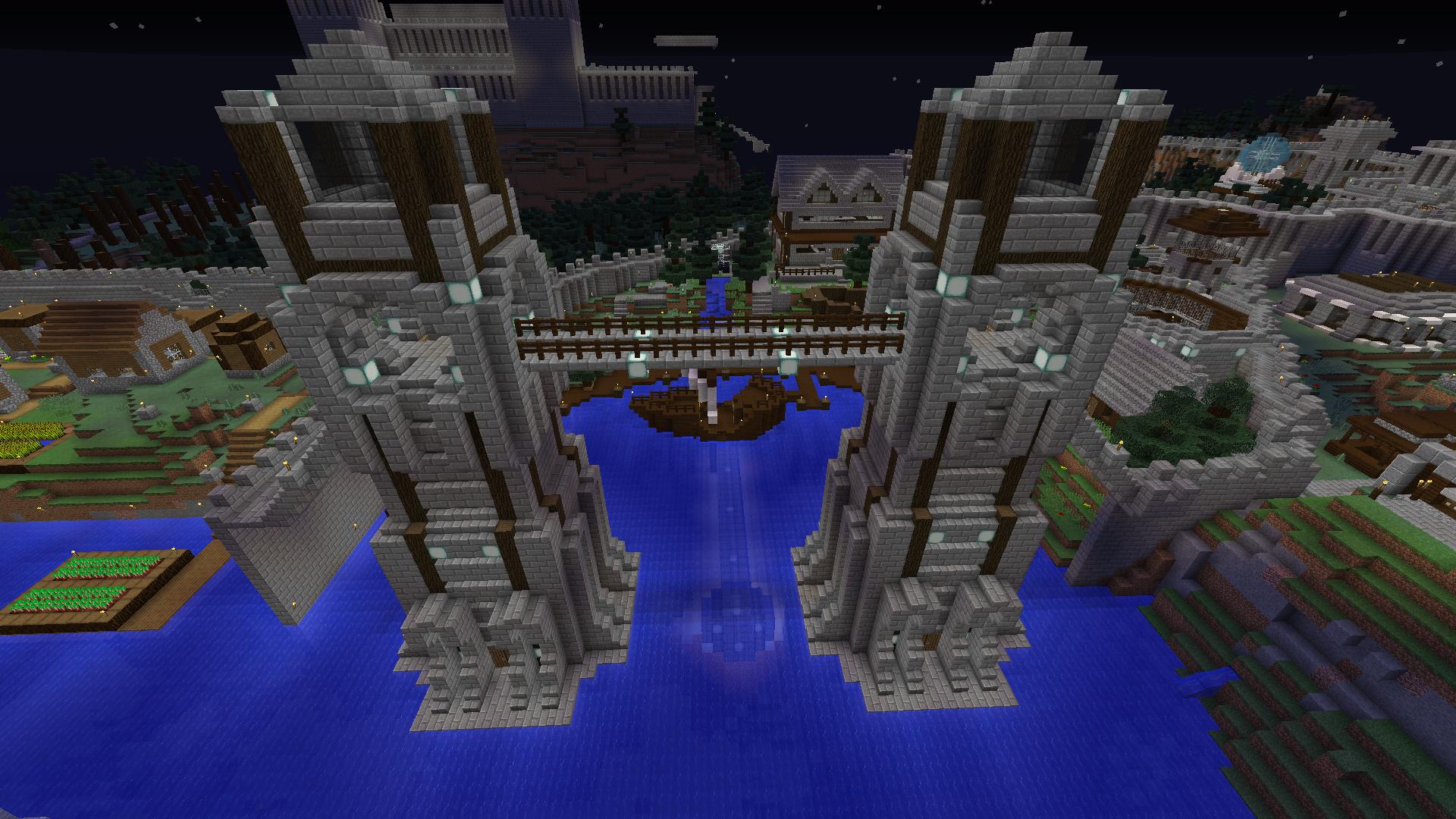 I wanted some good defenses for my dock so I built these two towers to help defend from naval invasions. They extend from the defensive walls and are built with Stone Bricks, Dark Oak Logs and some Lanterns to light it up. Unfortunately, due to the lack of space between them and the walls, large ships can’t get through. I plan to build a larger dock specifically for large ships while this one is used for merchant and transport ships. 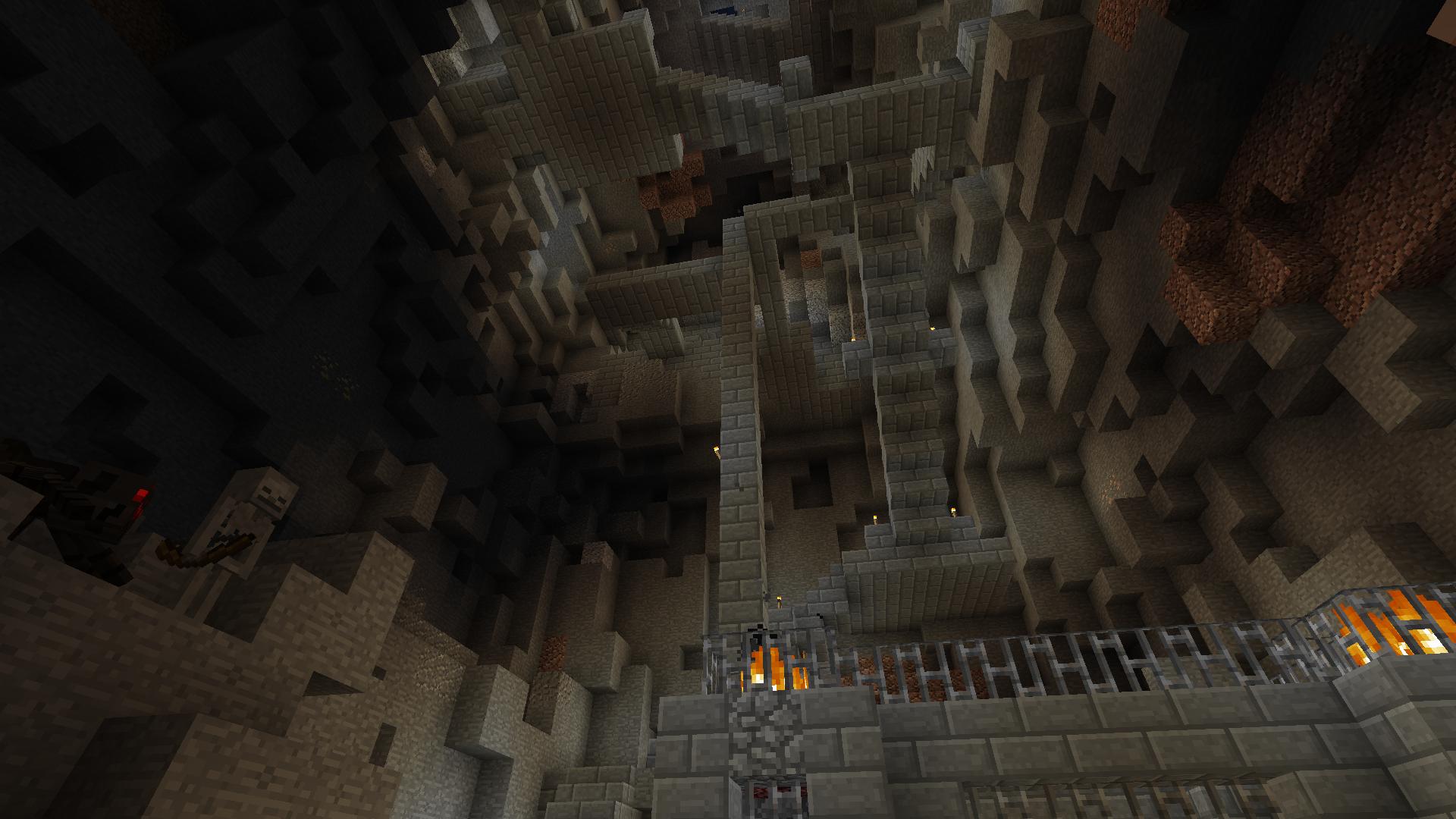 These mines were created by building a large hole and dropping a few stacks of live TNT down. Stairs were added and defenses were constructed at cave entrances. Miners can safely obtain resources here and adventurers can enter the unexplored caves. 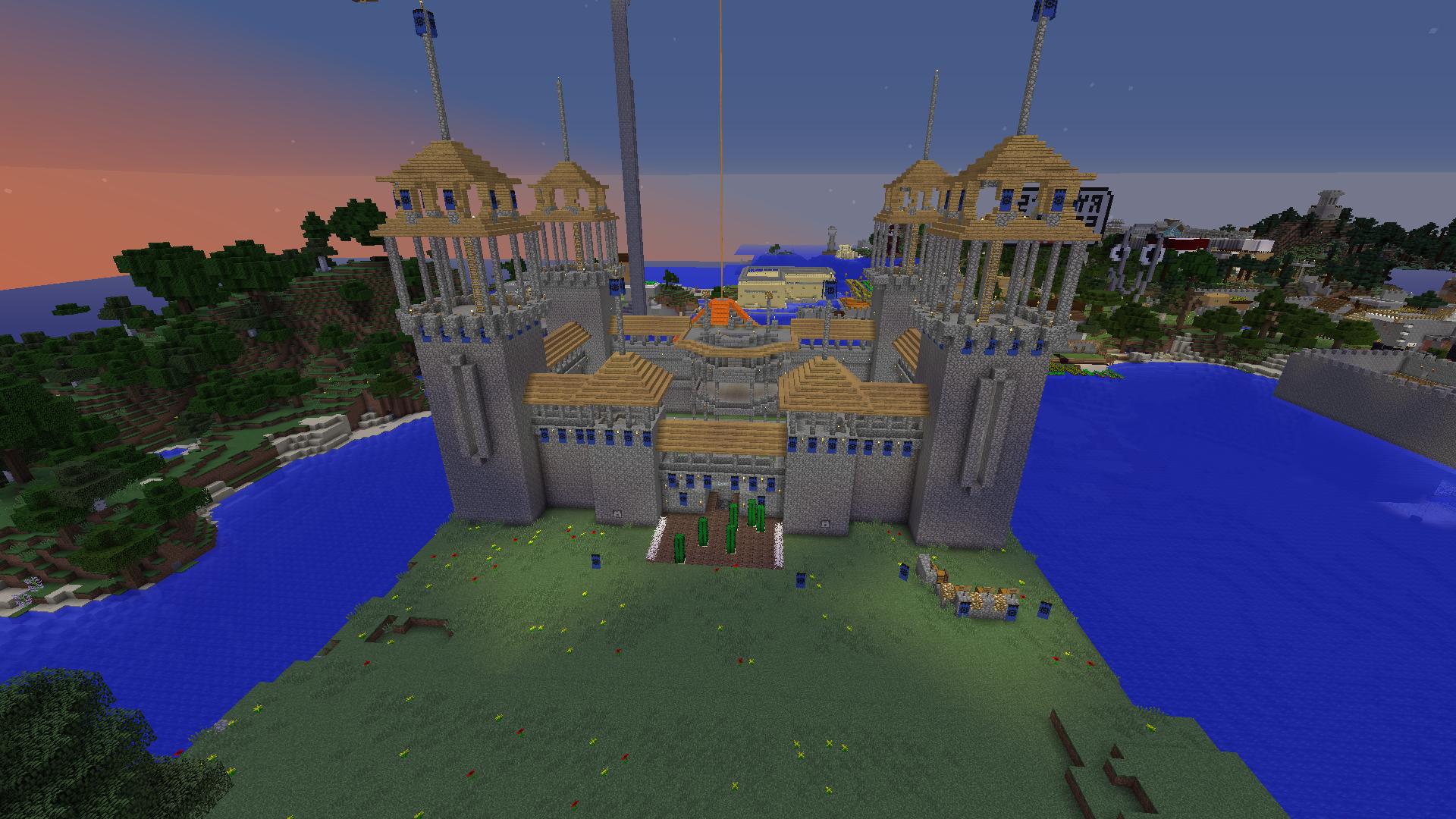 This was, unsurprisingly, one of my first ‘big’ builds. It’s a small keep specifically for military purposes. There aren’t many rooms for civilians or peasants to live in, nor are there good lands to build an economy. It is built exclusively with Oak Wood and Cobblestone blocks and is currently unoccupied. 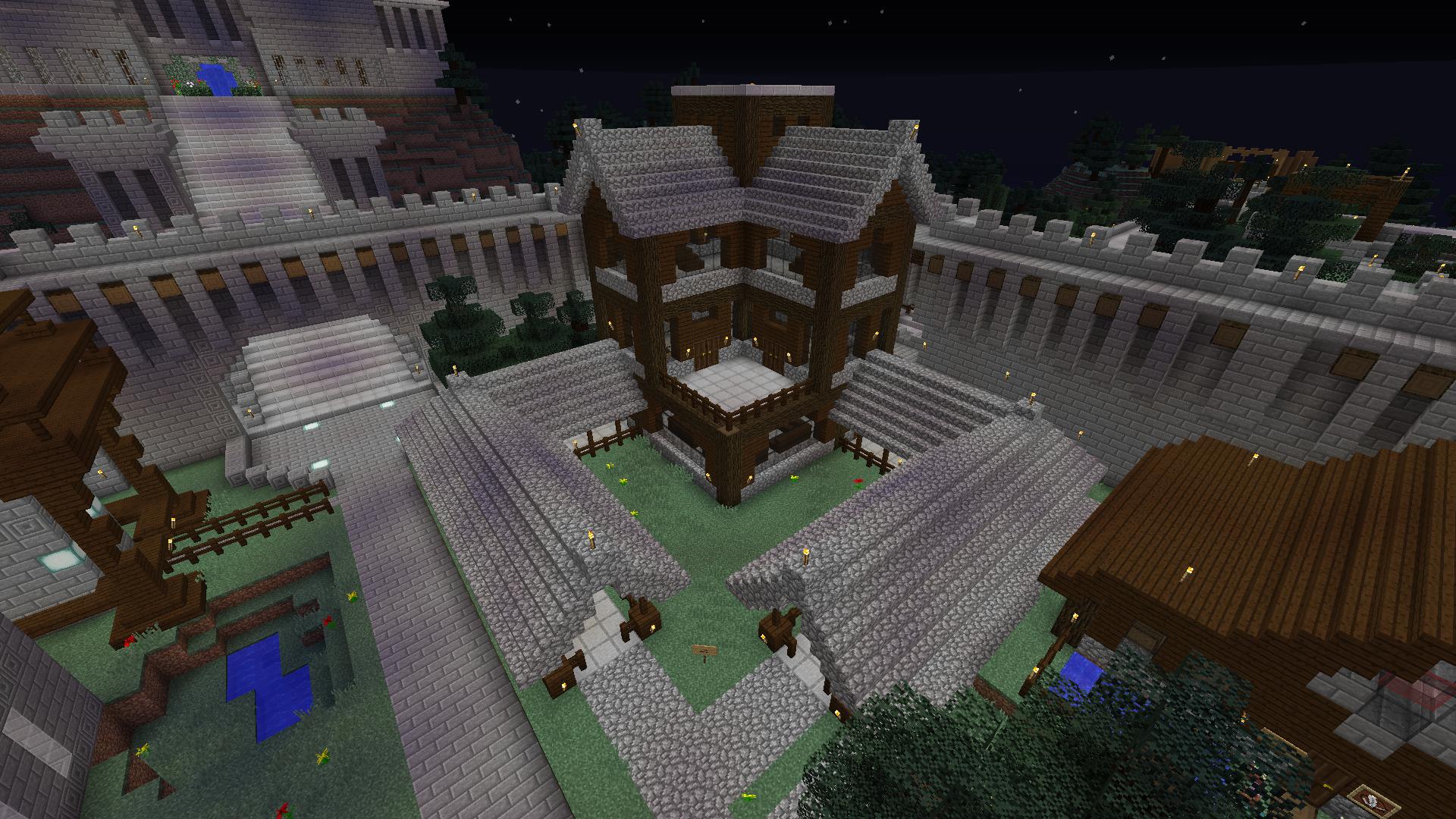 I love the architecture of the Town Center in Age of Empires 2 so I constructed my own version for the Town Center of my Kingdom. It is built with Dark Oak blocks, Cobblestone blocks and some Stone Slabs. The majority of the general people’s requests, accusations and suggestions are dealt with here by the Kingdom’s government. It is also the point between the Palace (more on that later) and the rest of the Kingdom. 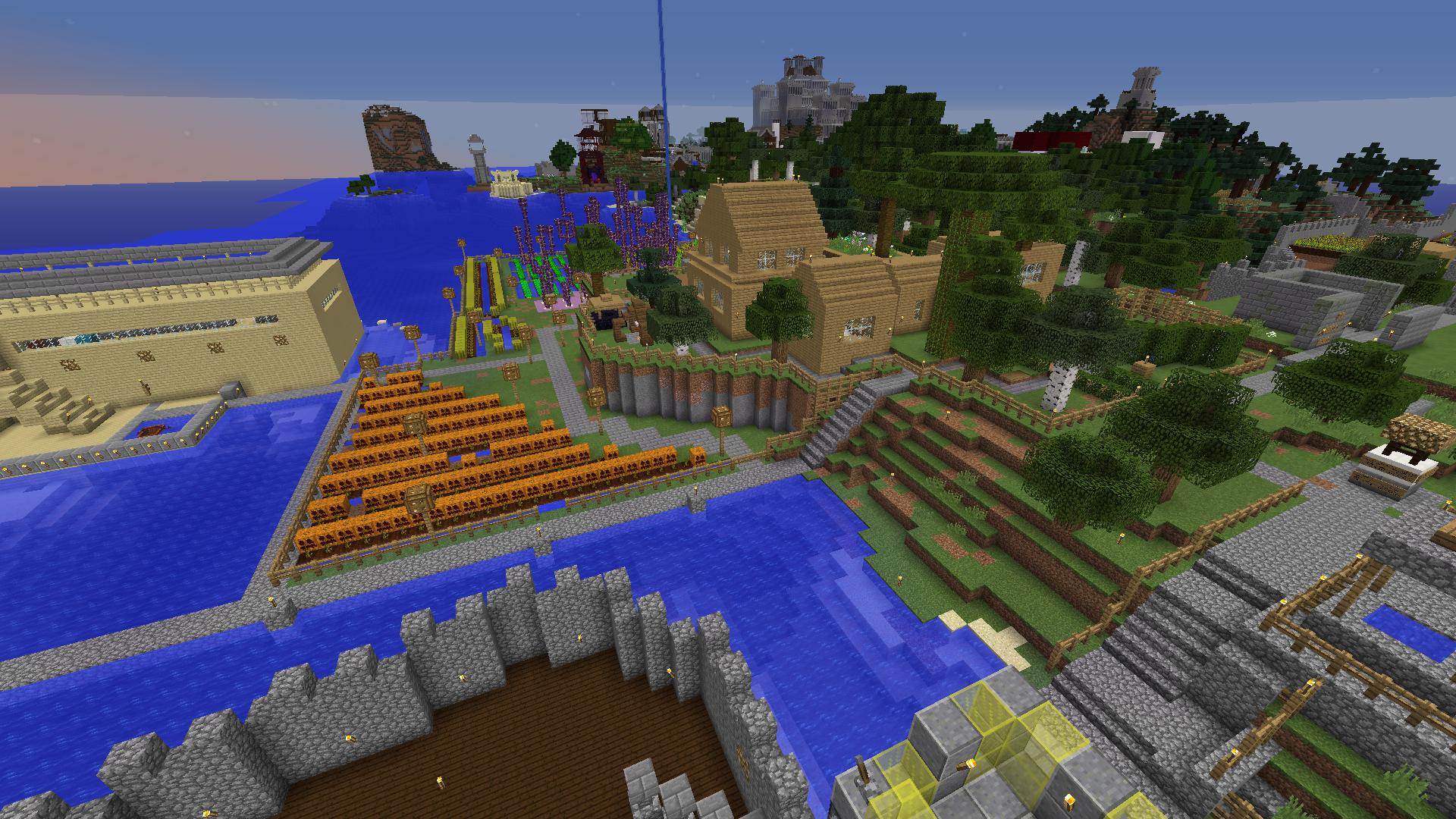 My house is the only build on this list that was created in survival mode only. It was my house as I went from a player with a few stacks of Wood to his name to completing every achievement and obtaining almost every block and item you can obtain in survival mode. As you can see it contains a large farm, every type of farmable food is located here. It also contains a large animal farm with each animal. Inside you won’t find much, only a bedroom and a few rooms to hold all of my items. 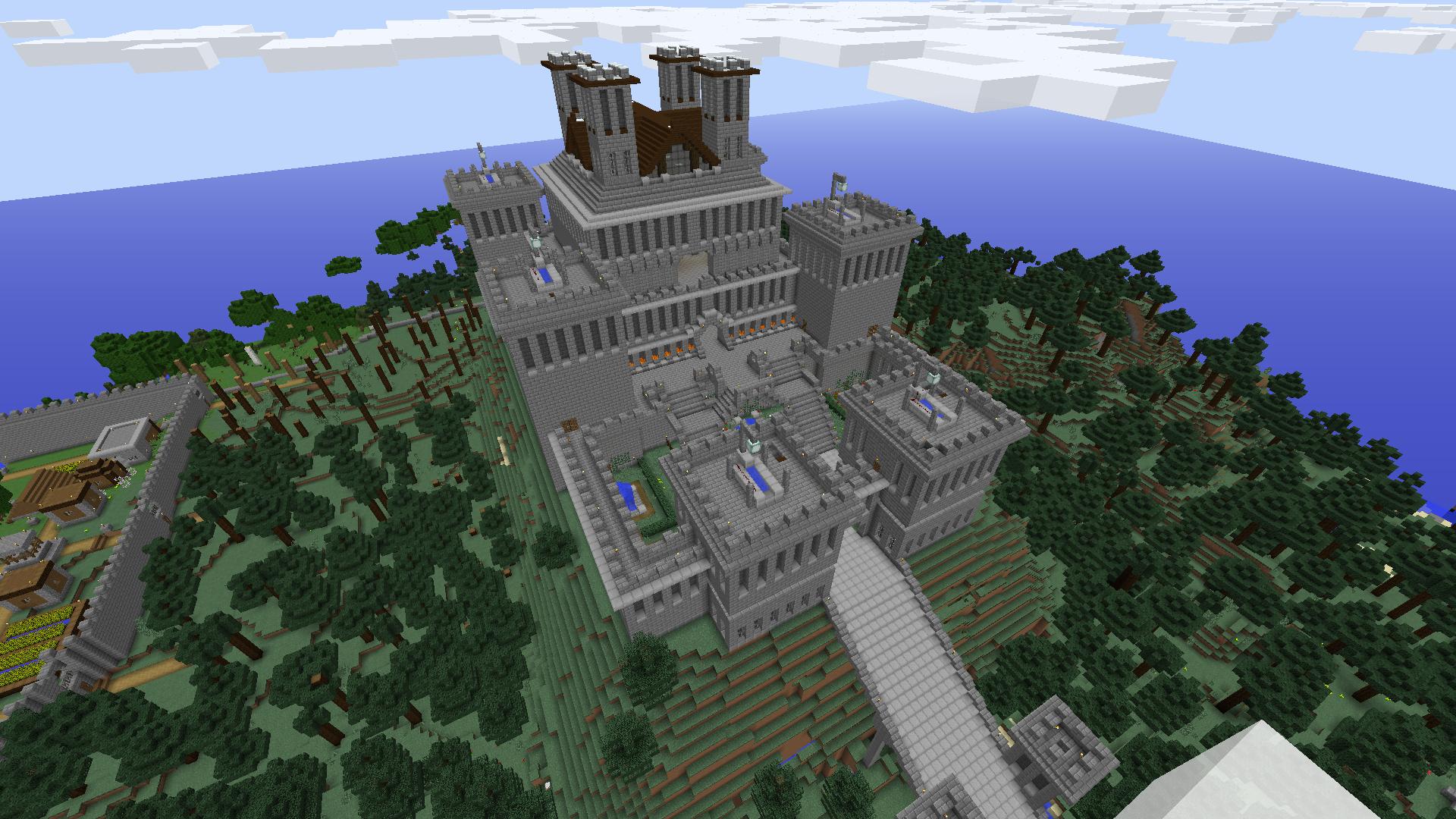 By far the biggest and most ambitious single building I’ve created. My Palace still isn’t finished after weeks of work as the interior is barely close to be doing done. The Lord of the Kingdom will live in this palace alongside his servants. It has a myriad of defenses with strong walls, TNT catapults, towers & barracks for troops to be stationed in. It is mostly built with Stone Bricks and Stone Slabs with some Dark Oak used for the Lord’s chambers. 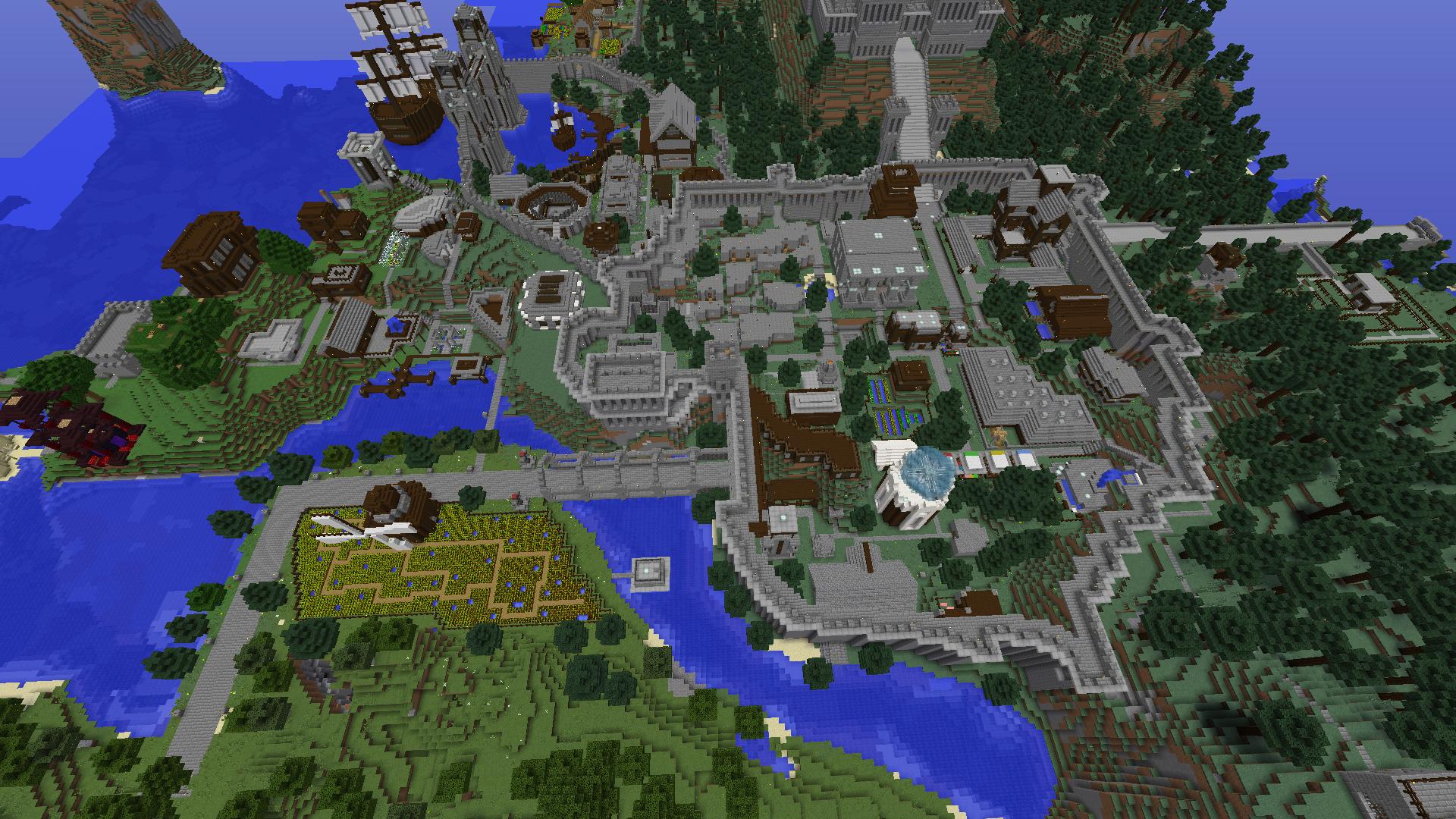 The full Kingdom has many sectors. The main one is the Imperial District where the Consortium Tower and Town Center are located. This district also contains an Inn, Stables, War Room (for commanders to discuss strategies), marketplace, butchers, a bank, school, library, barracks, plenty of houses and the Slums area. It is defended by a heavily fortified gate and strong walls. Outside of the gate you’ll find a windmill and large wheat field.

Towards the North, just past the Town Center, is the Palace. But if you go West you’ll get to one of two districts, the Dock and the Upper District. The dock contains an arena, a pub, a marketplace, a lumber yard and numerous houses. The Upper District mostly contains houses with some barracks and outposts located there as a defense as there are no walls.

To the East lies a number of villages, outposts and settlements that are protected, but not ruled by the Kingdom. They are subject to frequent bandit raids.

Just past the Dock District is an NPC village under the rule of the Kingdom. It has strong walls and the Palace watching over it.

I have been working on this for months but I’m starting to run out of ideas. Please if you have any suggestions, let me know 🙂

What is the seed number for this incredible world?

Not sure what that means tbh haha I've commented someone else the link to download the world though :)

can i have the map plz send at this email plz

Didn't want to email in case it went to spam but I uploaded it to Mediafire here: http://www.mediafire.com/file/p99bkz8eo9nvapc/My_MineCraft_World.rar

It's quite a large world though :)