Are you a newbie to the Dragon Age universe and seriously struggling with that health potion/keeping your party alive ratio while fighting High Dragons? Or are you a hard-core completionist aiming for Platinum/1000 but struggling to stay alive on Nightmare Difficulty? Fear not, Weary Gamer, Bioware has stayed true to the age-old law that binds all RPGs:
“Seek, and ye shall find [a lot of loot].”

But don’t worry: this list should cover all of the most unique equipment you need to not only take the game by the horns, but kick it right in the sweet spot too. I’ll include some of the weapons you can get early on in the game, as well as higher level items you will only be able to use long after reaching Skyhold.

This list will also include some items that require DLC to be installed, but if you don’t already have it, you can buy the DLC Bundle, which includes all released DLC since the base game’s release. You can get it for $29.99 on Xbox One, PS4, or Origin.

Strangely enough, the first unique item is neither equipment, nor is it particularly unique (it is “Unique” by the game’s standards, and that’s what counts).

Despite this amulet self-destructing after use, it is incredibly useful, especially if you are struggling to stay alive in battle, and maybe need to experiment with a new build. Even the game acknowledges how important it is to re-spec your character occasionally, offering this amulet for sale for only 1 silver piece from the blacksmith at Haven/Skyhold the first time you buy it.

If you want to buy more, they are 345 silver pieces for each subsequent amulet.

Tyrdda’s Staff is probably the very first really powerful staff you can get in the game, although that does depend on how much you enjoy exploration. In order to get your hands on it, you need to “claim” all of the location markers found across The Hinterlands.

Once you’ve done the legwork, a War Table mission will open up. The only real bummer is that the mission takes 24 hours if you send Josie or Leliana, and 19 hours 10 minutes if you send Cullen.

However, if you are lucky enough to own the PC version with all of the accompanying modding privileges, you might want to try this mod created by Tahira, which reduces all War Table mission wait times to 0.

If you are a Rogue Archer, or you like hearing Sera’s sassy comments about Vivienne while roaming around Thedas, then you’ll want to get this bow as soon as you are able to access The Storm Coast. You know those cool little Astrarium puzzles? (Almost) every area has three of them, and once you have solved all three puzzles, a secret chamber will unlock, or a hidden pathway will be revealed. Bane of Red Crossing is the treasure that awaits once you complete all three Astrariums in The Storm Coast.

This is one of the most powerful bows you will find early on in the game. The best part is, there are empty upgrade and rune slots, so you can seriously amp this bow up once you have some good tier 3 (or even 4) materials, and learn about rune-crafting. 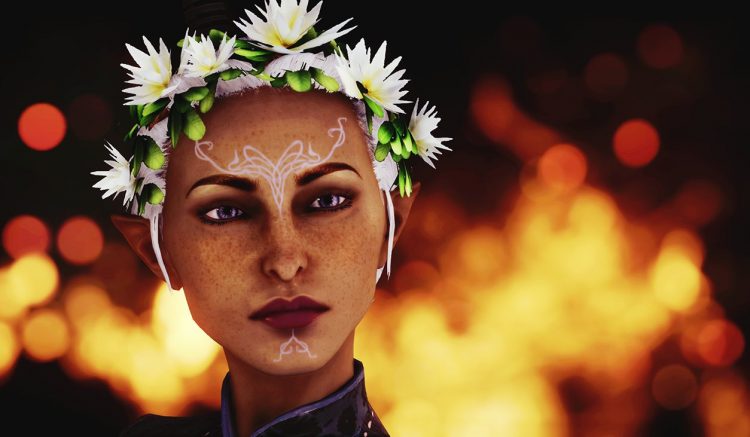 While not the best helmet in terms of stats, Ardent Blossom definitely packs a punch (get it? “Sunder when hit”?).

One of my biggest pet peeves is how ugly the helmets in DA:I are, and how stupid they make my Inquisitor look. That’s why I either enable the “Hide Helmets” option, or, wait until I’m at least level 19 to rock the Coachella look that is the flowery Ardent Blossom helmet.

So how do you get it? After completing The Tiniest Cave side-quest found in The Emerald Graves, it will spawn in a chest under Suledin Keep in Emprise du Lion. Once again, PC gamers: rejoice! If you want your entire party looking super pretty, you can install this mod by mercurialMalconent, which makes Ardent Blossom a schematic (replacing the really ugly Elven Cowl) that you can craft with whatever specs you want.

Sometimes being a console gamer is really unfair. 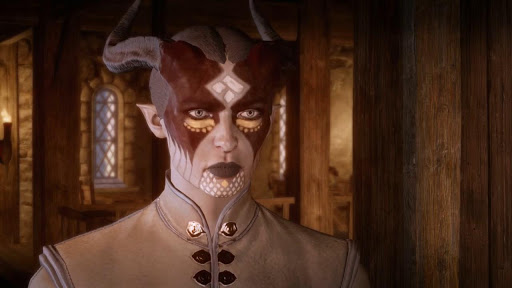 I’ve personally never created a Qunari Inquisitor, but The Iron Bull is a staple in my party because his banter is by far the best in my opinion (and I appreciate the acting chops it takes for Freddie Prinze Jr. to throw his voice like that).

Vitaar are pretty awesome, because they circumvent the aforementioned ‘hideous helmet dilemma’. Vitaar are (in layman’s terms), Qunari face paint, and the Arishock’s Vitaar is the only unique Vitaar you can get in the base game. While best suited to mages, there is no class-restriction.

So how do you get it? It’s actually a pretty tiresome process – but totally worth it if you’re playing a Qunari mage build. The Arishock Vitaar is one of many spoils you will receive after accessing the central chamber of Solasan temple in The Forbidden Oasis. All you need to do is collect 114 shards all over the world. No biggie.

As the name suggests, this little trinket confuses the hell out of your enemies. A mage? Using stealth? Impossible! 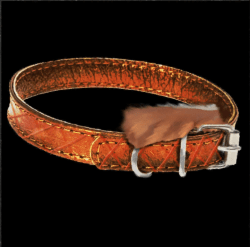 That second point may seem like a deal-breaker, but take it from a seasoned veteran with well over 1000 hours of gameplay under her belt: if you are a mage, or have a mage in your party (if you don’t, you’re playing the game wrong), you want this amulet.

Ideally, your mage should be apart from melee combat, with your warriors taking the majority of the damage. That means, depending on the situation, that your mage should not receive direct damage for 50-60% of the battle. If, however, they are targeted, Kitty’s Collar will either resist the strike (lessen the damage taken), or, if the blow kills your mage, it should revive them.

You can find this little gem after capturing Griffin Wing Keep in The Western Approach, on the corpse of Macrinus (the boss Venatori at the keep). If you have the Tresspasser DLC, you can also buy Kitty’s Collar from the Winter’s Palace Merchant (but only if you don’t already have it in your inventory) for the nominal price of only 14,495 silver pieces.

Useless but interesting side note: Apart from the fact that this amulet has saved by butt countless times (especially when fighting dragons), the item itself is a pretty cool throwback to The Stone Prisoner DLC in Dragon Age: Origins.

This is another one you want for either your attack mage, or your warrior (whichever is pulling the most rage). What does the +10% heal bonus mean? Basically, every time you drink a health potion, you will get the original benefits, +10%. Same with any health-related equipment or spells, such as Death Syphon.

You can get this baby at The Black Emporium (it requires The Black Emporium DLC. Don’t worry – it’s free). Unfortunately, the belt is not free. In fact, you’re going to have to save up for this one, which sells for the tidy sum of 15,075 silver pieces . You can also buy it for the same price at The Winter Palace merchant if you have the Tresspasser DLC.

Trespasser introduced the Trials and Trial Reward system to the game. When choosing your difficulty (or changing it), you can enable or disable various Trials, such a “Travel Light”, which removes all supply caches from the game (meaning you won’t be able to stock up on health potions during big battles), or “Take It Slow”, which halves all XP earned from battles and quests while active. Each Trial improves your chances of receiving a reward, and the more Trials you have active at once, the better your chances of receiving a “Special Shipment”.

Sadly, Trial Rewards are completely random, but if patience is your virtue, there is an easy way around this. Simply save right before opening the Special Shipments chest (locations: the house you wake up in in Haven, Skyhold’s Undercroft, or a house on the north end of the Winter Palace area if you are busy playing Trespasser), and open the chest. If it isn’t Bolt, reload the save and try again. It could take forever, or it could be your lucky day and take two tries. It’s up to the Maker. 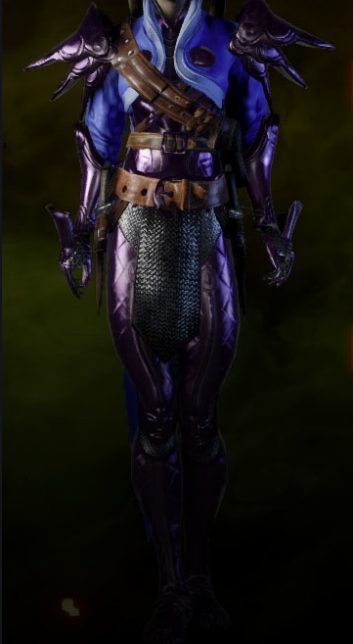 The Trespasser DLC is required for this item set.

This one is a bit of a cheat, because it’s not one, but rather four different items that make up one badass outfit. Each item has its own unique stats, but when worn together, you get a stacking bonus (which I’ll explain in a moment).

The items that make up The Taken Shape include:

The Eye That Weeps (Amulet)

Looted from a chest in the Hidden Hollow

The Bind That Guides (Belt)

You can find this in a chest in The Forgotten Tower

The Hand That Cuts (Ring)

Looted from a chest in the Abandoned Chateaux

The Skin That Stalks (Medium armor)

You’ll find the fourth and final part of the set in The Ancient Jail.

The bonus works like this: if you are wearing two pieces of the set, you get 10% Attack Speed. Having three items increases movement speed by 10%, plus the attack speed bonus. The full set gets you 1% heal on being hit, as well as the other two bonuses. Which basically borders on invincibility.

Even if you’ve completed the campaign, there are still hundreds of side-quests, rifts, trophies and achievements to chase once the story is “over”. Having these items will definitely make for an almost laid-back experience, even on Nightmare difficulty.