Alright guys, some of you might remember in the previous Fallout 76 list; I had mentioned Perk Cards. Well today we’re going to be going more in depth with them, to bring you the Top Ten Perk Cards that everyone should be using in the game because lets be honest there are some that you absolutely must always unlock on every character.

There are different kinds of Perk Cards you could use to beef up your character and give you the ability to do different things. Such as creating a very detailed base specified to your liking or even better Home Defense items for that base (Such as different kinds of turrets and traps). You can even upgrade your cooking or chemistry skills! Especially if you want to have good survivability and damage output to raise the fun factor of the game. So let’s head on into it! 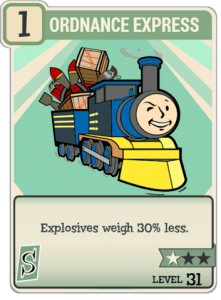 We are starting off with Ordinance Express at the beginning because, honestly who doesn’t use explosives? Ordinance Express is in the Strength category of the Perk Cards and it makes your explosives weigh considerably less in your Inventory once full upgraded (90% less by the way!). Making it that much easier to carry more of those grenades or mines that you really like to use the most. 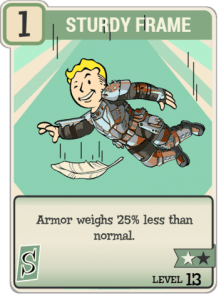 The next Strength Perk Card in the list is, Sturdy Frame and this Perk Card is definitely one you wanna have because it makes your armor weigh 50% less (once fully upgraded) and obviously everyone wears armor. So, unless you really don’t care about exceeding your Carry Weight in the game I highly suggest getting it; especially if you wear Heavy Armor! 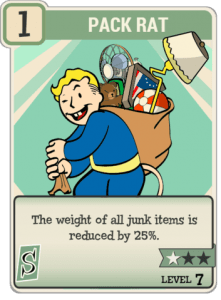 This Perk Card really comes in handy for those that literally pick up everything that they need for crafting materials and is another in the Strength category. That’s right, you guessed it; it’s Pack Rat! This makes all of your Junk weigh 75% less when fully  upgraded and lets be honest guys we tend to pick up a lot of crap until we realize we’re overencumbered by all that junk in your Inventory slot! 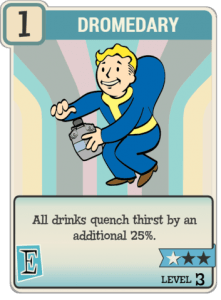 Breaking the ice for the Endurance category first in the list is for you thirsty players. It’s Dromedary! Dromedary is an Endurance Perk Card that, once upgraded all the way, lets all drinks quench your Thirst by 75%! This is quite convenient because of the Thirst and Hunger status effects constantly lowering to simulate Real Life conditions in the game. 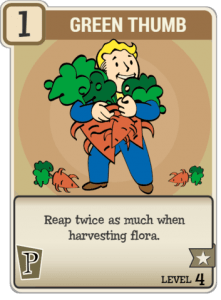 Our first in the Perception category is a Perk Card specifically for crafting or those specializing as a crafter and that is Green Thumb. This allows you to get twice the amount of materials from plants you harvest and tends to make crafting easier so you don’t have to go searching for even more materials to use. So if you think this applies to you; then this is a must have. 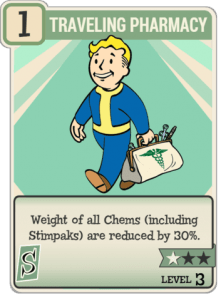 The Fifth Perk Card in the list is another in the Strength section, the Traveling Pharmacy. This makes all of your Chems weigh 90% less after it becomes maxed out, this also includes your Stimpaks which is a plus because you always need a good amount of healing Chems in your Inventory so not to get caught off guard and die. 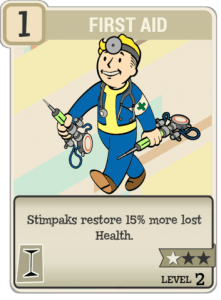 Coming in at Fourth place in the list is First Aid is our one and only Intelligence categoried Perk Card, and in my opinion will always be required on a character. If you combine First Aid with Traveling Pharmacy, that makes First Aid even better since it makes your Stimpaks restore 45% more Health once it’s maxed out and with Traveling Pharmacy giving your chems a significant amount of weight reduction you’ll be able to have a large amount of healing chems that are boosted which can never be bad for you. 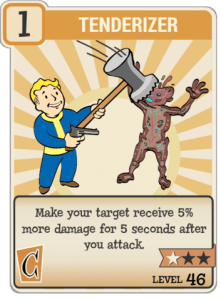 Next is our last damage oriented Perk Card and our first in the Charisma category; Tenderizer. Now I haven’t acquired this one yet, but I do plan on maxing it out because who turns down extra damage? Nobody. Tenderizer allows your to make your target take 7% more damage for 10 seconds after you attack which if you have any high fire rate weapon, it would do some good damage to your enemies! 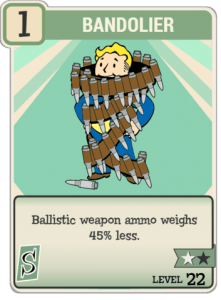 The final Strength Perk Card I put in Second is Bandolier for 2 reasons, one because of the obvious reasom; it makes all of your ammo weigh 90% less ( When maxed out) and gives more room in your Inventory but the second is because it fits perfectly with Ammosmith since it lets you carry tons of the ammo you use the most; since ammo can be a problem. It’s not hard to find, you just use a lot of it with weapons like the Minigun or the Handmade Rifle. 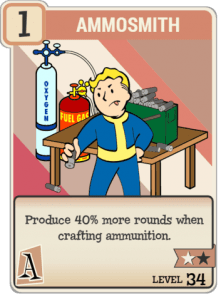 First and Top in the list is the previously mentioned Ammosmith, one of the most important Perk Cards in Agility because you can make 80% more rounds when crafting ammo (Also when maxed). Just like I mentioned when talking about Bandolier, you use a lot of ammo when using Ballistic Weapons in Fallout 76, and pairs perfectly with Bandolier guys!