Octane has quickly become a fan favorite in the Apex Legends community. While his kit isn’t exactly game breaking, Octane’s personality and abilities make for one fun legend. His movement boosted sprint animation is particularly hilarious. You’ve likely encountered him on many an occasion already, showcasing how popular he’s become.

However, regardless of how fun he is, Octane has some pretty awesome skins available to him. His thematic and character model allow for tons of variations, the developers have done an awesome job at doing so.

I’ll be ranking the 10 best skins available to Octane right now. Octane always catches the enemy’s eye, so making sure you look as epic as possible is important! 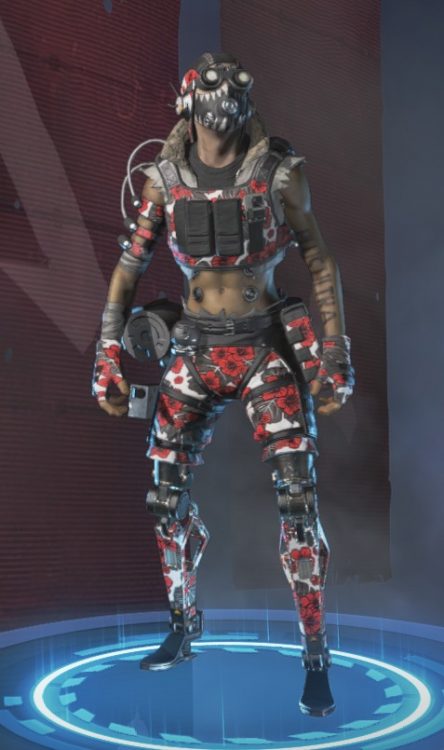 First off is the more urban like camouflage, Ornamental Nature, instead of your traditional darker green colors mixed in with black and brown; you get a lighter red with white and black. For your more urban area, but instead of your black, grey and white you get the colors mentioned previously. Time to blend in and take no prisoners with military skin! 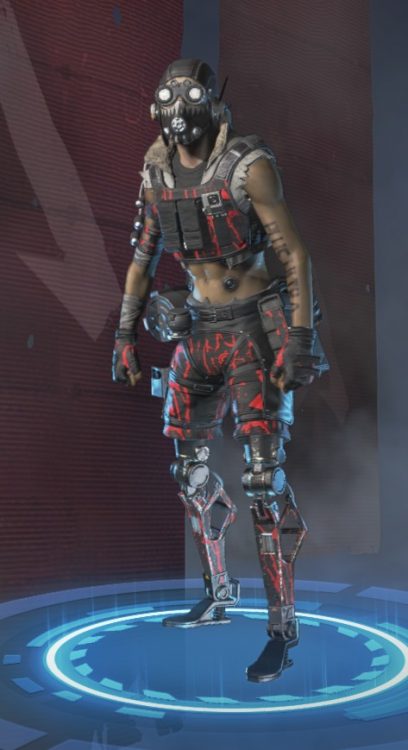 Next is a more aggressive and threatening skin called, Bloodline! Now this skin features a simple red and black color scheme, but that’s not all. It has a bit of a camo-splatter like pattern all over with the black as contrast and as we all know the character Octane is all about pushing to the limit, going fast and being a bit of a daredevil with his antics.

That being said this skin, I would assume, is there for a good intimation look and with the red making him look like he has blood on him while running so fast it should put some fear into your opponent! 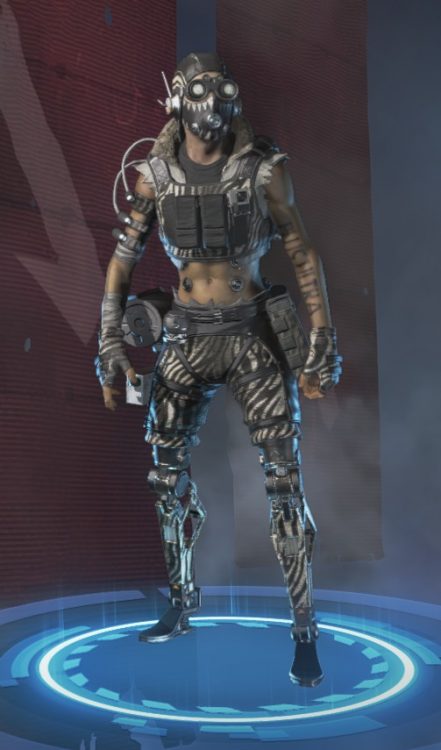 Third on our list is a skin more fitting for Octanes speedy like personality named, Racing Stripes! As the name suggests and basically hit the nail on the head, it shows your old school black and white colors with an almost Zebra striped pattern.

The lines are a tad slimmer than those on Zebra though, so to have more of them covering his gear, that way when he’s speeding across the terrain whether to escape or kill an enemy; you’ll be seeing a striped blur of black and white! 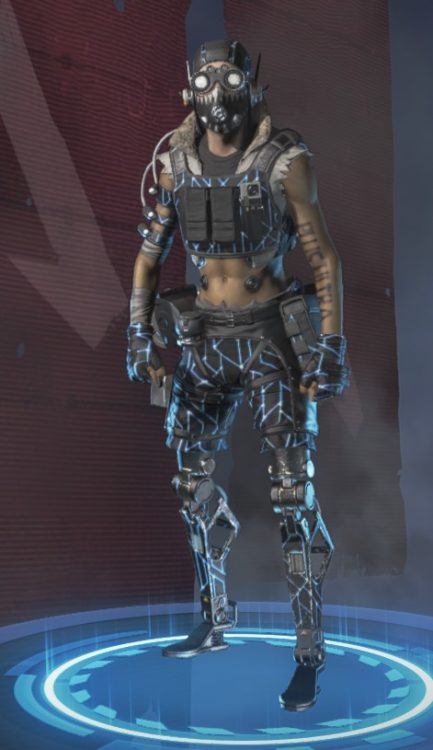 This one might speak to the tech-heads out there because next up is Circuit Breaker!

Featuring a lighter blue color on the usual black background, except this time the pattern looks just like the name spells it out for ya; a circuit!

It runs all over Octanes body that his gear covers, bionic legs included. It may not be as flashy as the name sounds, but it certainly makes for a nice look when you’re out there doing some damage, that’s for sure. 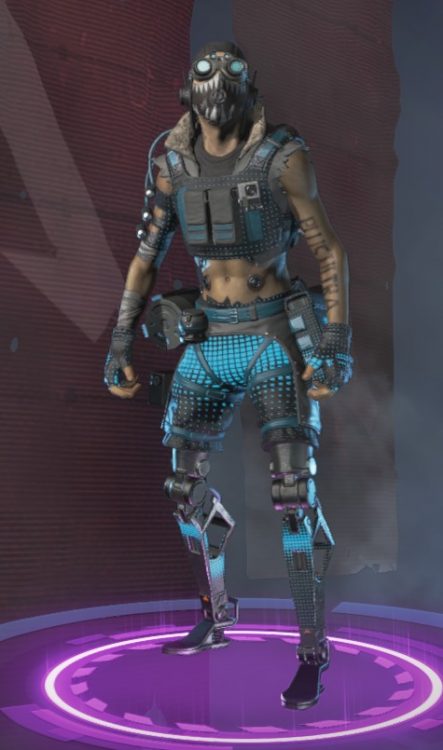 Now that we’ve gotten over the hump in our Top Ten list, we’ll be going into the more lively and more animated skins for the next few. So with that being said Neural Net is the first one of those to show up!

Unlike the other skins mentioned previously; this one has a more predominant look with it’s darker blue coloring and a wave like animation flowing downward; going primarily over Octanes entire body!

If this one doesn’t catch someones liking then I don’t know what will! 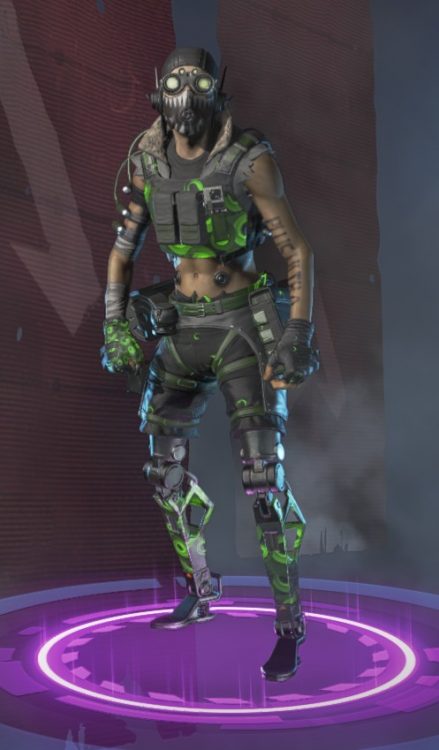 Once again there’s a skin that might speak to those tech-heads out there because this one definitely hacked it’s way into this list at number six. Hack the System showcases yet another animation in it’s look, but this one is a little different this time.  The animation features a bunch of green circles pulsating; yet it shows things going in two different directions this time.

At first it starts a downward motion after blinking into view right at the same time as the green circles (in the other part of the animation) are going up in a diagonal direction. The skin is definitely the most lively of all of the others. 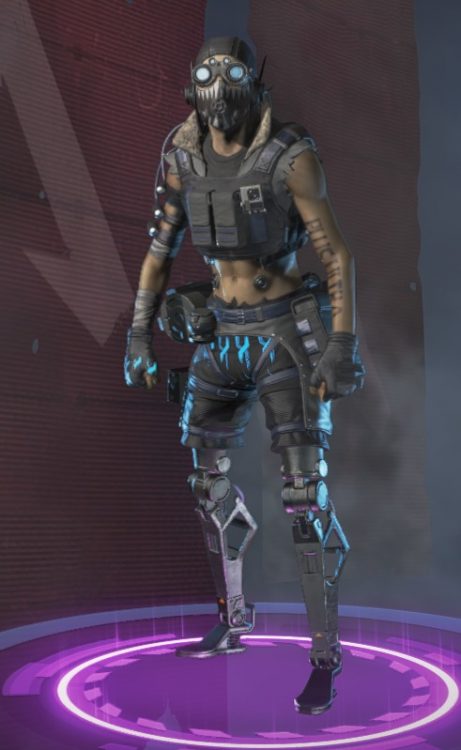 Look out for this next one, this is the final technological theme based skin on the list; it’s Fiber Optics! Just like it’s predecessor, Circuit Breaker, this too has a lighter blue coloring with the circuitry look for it’s pattern.  Alas, this is where the two part ways and that’s simply because Fiber Optics also has it’s own animation!

Its animation features a cascading effect that, well, cascades down Octane entirely but while doing so it likes to fade in and out while doing so. Proving it’s not just some one trick pony either, people. 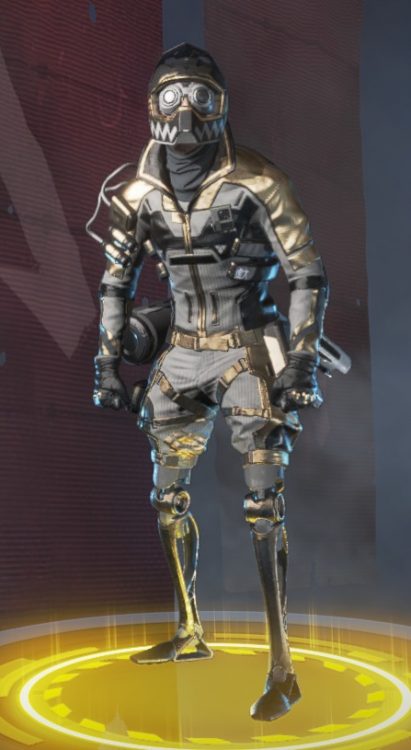 Get ready the final skins that made it to the top three of the list and in third is, Gold Rush. The name Gold Rush does kind of remind me of the Gold Rush in the U.S. but that’s got nothing on this skin, because this one has nothing to do with mining for gold! That’s right, it’s look makes you think of Motorcross and Dirt Bikes!

It looks just like the traditional riding gear for those that ride Dirt Bikes professionally except the colors have some golden chrome on half of the jacket with the other half having black and grey on it. This skin personifies Octanes speed freak mentality and also has a counterpart with a different color scheme. 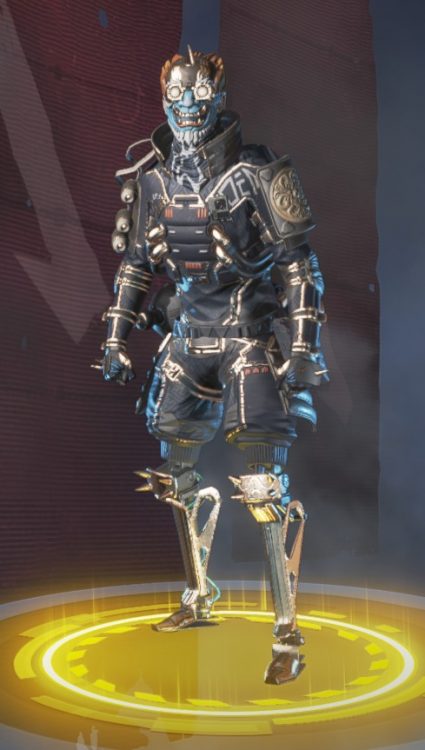 For those of that like the demonic look on our characters, the top two on the list are just for you my friends! So with that being said Speed Demon is here to show the power of Hell! Speed Demon has no animations either, although it doesn’t matter because it’s demonic face mask and armor should be enough.

The color pattern on this one isn’t too complex, the mask shows blue where it looks like “skin” is while baring it’s fangs at you in a sadistic grin. The top of the mask that cover the forehead and above is a metallic grey with black mixed in along with a single chrome spike/horn in the middle; whereas the armor feels like a samurai meets the future.

It shows cartridge and tubes all over him, linking certain parts together like some bionic demon warrior and the armor is a very dark blue for the primary pieces along with some chrome spliced in there. This skin is up there in the scary factor guys. 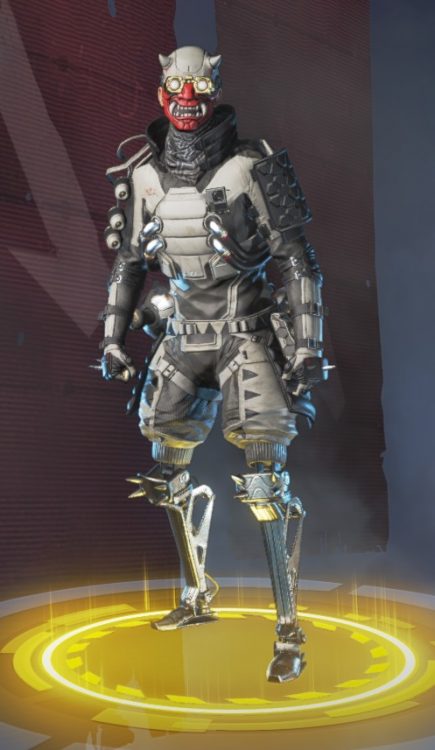 Last and at the top of the list is the counterpart for Speed Demon,  El Diablo, but don’t let that detour you because it is its own force to be reckoned with!

The armor is basically just like Speed Demons except it’s black and white, with the mask having it’s own color scheme. The mask looks just like those old Japanese Oni masks, down to the coloring, with the top half white and the horns on the forehead and the bottom half blood red with the evil toothy grin like it’s ready for some carnage. Personally this skin is my top favorite of them all because it’s there to strike terror in your enemies…and of course it’s super bad ass!