Infantry is the core of any army found anywhere in the world. Specialised units like archers and cavalry are powerful but costly. Infantry can be produced in large numbers for little resources.

Due to this, infantry based civilizations are well received in most strategy games. Age of Empires 2 is no different, with a plethora of units available through the barracks or unique units.

If you’re looking to sink your teeth into a civilization that utilises your favorite unit type, I’ll be going through the 10 best in Age of Empires 2.

Rankings are dependant on a number of factors. Each civilization has unique bonuses for their infantry, while some are able to produce units quicker or have access to powerful unique infantry units.

Boyar being the unique unit has nothing to do with infantry, instead it’s a heavy cavalry unit. However, Slavs have access to a powerful unique research that grants splash damage to all infantry units.

It does cost 1200 Food and 500 Gold, which is a heavy price to pay and severely affects this civilization’s rankings. If you can afford it though, Druzhina will make your infantry armies particularly formidable.

In addition to the light and versatile Gbeto unit, Malians grant additional pierce armor to their infantry units per age, helping protect against archer fire.

They cannot upgrade to the Halberdier which is a huge downside. Gbeto units are one of the best anti-infantry skirmishers in the game though, moving and attacking very fast.

Teutonic Knights are simply the best infantry unit in the game, in combat. Heavy armor and hard-hitting attacks allow them to beat any other melee unit in the game in a 1v1 fight.

Obviously, such heavy armor takes a toll on their movement speed. Teutonic Knights are slow, vulnerable to ranged units. Utilise them wisely, while they are strong, they are expensive.

The unique Crenellations tech allows infantry to fire arrows when garrisoned too. 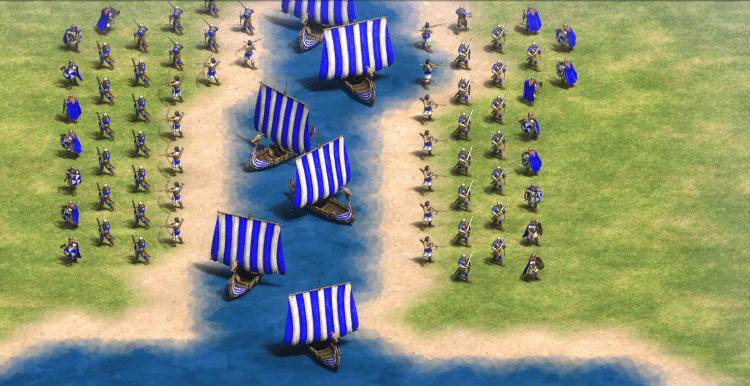 Fielding powerful Berserk units with the ability to regenerate, Vikings excel at long skirmishes. Most armies need to return to base to recover, or bring Monks with them.

Chieftains grant additional attack against cavalry. The Spearman line becomes even more effective at that point, except enemies to field more archers as Vikings are vulnerable to ranged attacks.

Shotel Warriors are produced faster than most other units in the game, allowing you to amass armies quickly and consistently. In battle, they do have low HP so can be killed easily, a high attack stat means they deal some damage before going down, though.

A nice little bonus for Ethiopians is the free Pikeman upgrade!

Having access to everything a Siege Workshop can produce is a huge boon, not exactly infantry based but keep it in mind.

If you’re looking for an army focused on the militia line, Bulgarians are the choice for you. Bagains grant 5 armor to the line and upgrades are free!

Blacksmiths also work 50%. Not having to wait long to get a fully upgraded militia line is pretty awesome, you can field an upgraded army in no time at all.

Samurai are a specilist unit, gaining a crazy high attack bonus against other unique units. In addition, they have an innately increased attack speed, as well as the Japanese’s bonus of 33% after reaching the Feudal Age (works for all infantry).

Other than the Samurai and attack speed bonus, this civilization doesn’t offer much else for infantry. However, I firmly believe it’s well worth making top 5 on this list, for how fun and effective the Samurai are.

My personal second favorite, specifically for the Karambit Warriors. They’re extremely cheap & take up half a population unit. It’s tempting to produce hundreds of them, however you should utilise them wisely. Each one can be killed easily, so use them for hit-and-run tactics, taking out villagers and stray military units.

The Forced Levy tech changes any infantry unit costs from food/gold to just food, allowing you to put your gold into more important units like Knights.

Fielding one of the most powerful infantry units in the game, second only to Teutonic Knights in a 1v1 fight, are the Aztecs. You cannot build any cavalry at all with this civilization, putting your complete focus into infantry based game-play.

Garland Wars gives infantry even more attack. Aztecs are a ridiculously easy civilization to play, I strongly recommend them for learning how to properly play infantry.

A fully upgraded Barracks belonging to the Goths will work 120% faster than other civilizations, including research. Additionally, infantry are 35% cheaper starting from the Feudal Age, and gain extra attack against buildings.

Most of their power comes in the form of Huskarls, powerful infantry that are basically immune to ranged attacks. This civilization requires a lot more micro management than others but overall, the bonuses offered make it well worth the effort.

Please add incas too. Kamayuks can kill many infantry in group fights due to their 1 range although they cannot beat them in 1v1 fight. They also have fully-upgraded Elite eagle warriors, champions and Halberdiers. They deserve a mention.