Spells are just as important as units in Legends of Runeterra. Tons of value can be gained from even the simplest spells, which are worth using at all stages of the game.

Many players tend to spam low cost units early on. While that can be effective, a good mixture of spells/units is important.

If you’re going to do it, keep your mind on the right spells. Here’s a list of the 10 best spells that cost 1 mana in the entire game! 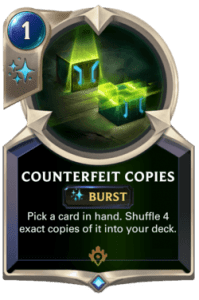 Using a card for no immediate return can seem painful but 4 additional copies of an important card can be incredible. It even works on champions, adding a bunch of Heimerdingers, Ezreals, Gangplanks etc into your deck is frustrating for your opponent, who just can’t get rid of them.

Of course, increasing the cards in your deck will reduce the chance of getting certain cards you need. Also, decks based around Deep units will be heavily affected, thus I wouldn’t recommend Counterfeit Copies in there. 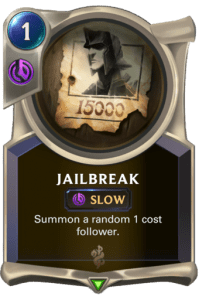 Why would you include this when you could just include a 1 cost you know will fit snuggly into the deck? Putting units on board is important but sometimes, you just don’t have the mana. Being able to use your spell mana to get units is criminally under-rated, a tip that few in the LoR community are aware of! 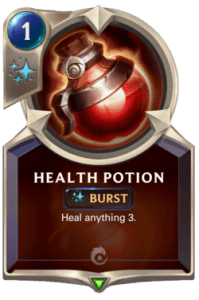 Nice and simple, great for holding out against burn decks. It’s not uncommon for your opponent to think they’ve got a victory in the bag, they’ll often misplay since they think it’s over.

Pull out a health potion and get yourself back in the game. Also suitable for use on high tier units such as champions or 7+ mana cost units! 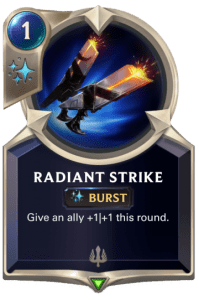 One or two Radiant Strikes can turn the tide of a duel, especially in the early game. Such a small boost is actually very strong, especially with it being a burst spell. 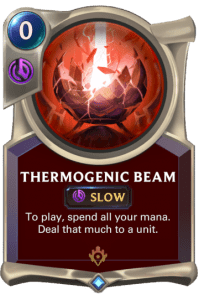 When used as a 1 cost, Thermogenic Beam will deal 1 damage to a unit. That’s pretty decent and can wipe out some 2 or 3 cost units. Otherwise, the added flexibility of using it at higher mana costs is too good to turn down for a lot of decks. 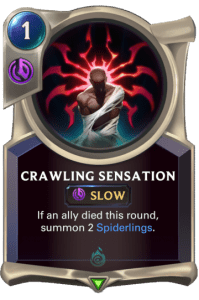 Some things in Legends of Runeterra are annoying, then some are incredibly frustrating. Wiping an opponent’s board, only to see them activate 2 Crawling Sensations is enough to cause facepalm everywhere.

Working best alongside the Spider archetype, this spell can fit into literally any deck. 2 weak blockers for the price of 1 mana is just epic. 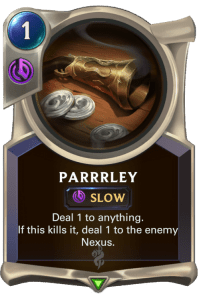 Kill an enemy and deal some damage. 1 hit to the enemy Nexus is small at first but once the game starts coming to a conclusion, it might make a huge difference.

Being a slow spell is the only thing holding Parrrley back but that’s justified, it’d be way too overpowered if it was anything else. 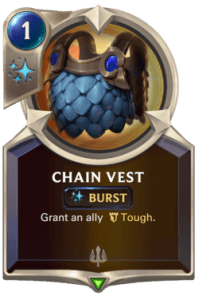 How so many players don’t give Chain Vest a second glance is confusing. Granting an ally Tough can provide so much value. It can be used early game to deal with 1 attack enemy units. Or you can grant your own champions Tough, adding it to Braum, Garen, Zed or Fiora is very strong. 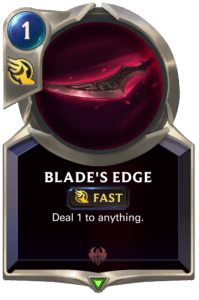 Perhaps the most basic card in the entire game, Blade’s Edge is pretty good in its simplicity. Dealing 1 damage to anything (enemy/allied units or Nexus) is versatile and works perfectly alongside the likes of death, burn and noxian decks. 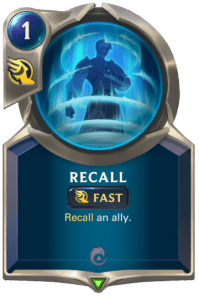 Towards the late game, both players will be throwing out powerful spells and levelled up champions. Keeping your strongest units alive is extremely tough and can decide games. If they get into some trouble, you can just use Recall to add it back to your hand!

Actually quite crazy for how much it costs. You can get a higher cost version that allows you to recall enemy units instead, but that costs a whopping 5 mana.