I think we can all agree thunder monsters are massively under-funded..

In fact, there are only 98 thunder-type monsters in the entire game!

They’ve been almost completely ignored for a long, long time. The thunder monsters that do exist are barely worth a second look. Well, that’s a lie, there are a few that are actually really good. However, I couldn’t find more than a couple that were actually worth using but I’ve made a list of the best thunder type monsters in Yugioh anyway. Maybe there’s some strategies I haven’t seen?

Regardless, I weighed them up well and these are the entries I determined!

Note: I have not included archetypes, everyone already knows the likes of Batteryman and Watts.

I will point out a few thunder monsters that don’t seem to have an archetype, but are “similar” enough to not be ranked individually. These are Brohunder, Mahunder, Pahunder, Rai-Mei and Rai-Jin.

10. The Ascended of Thunder 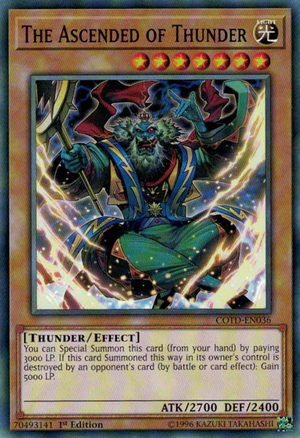 The upgrade of its Immortal counterpart, The Ascended of Thunder is a great little thunder type card. With a fairly niche effect, you won’t find many strategies to incorporate this monster into but if you do, it can be powerful in its own right. The reason it’s only 10th is due to the cost.  While you might think gaining 5000 LP is amazing, you won’t get it if this card is returned to the hand/deck or banished. 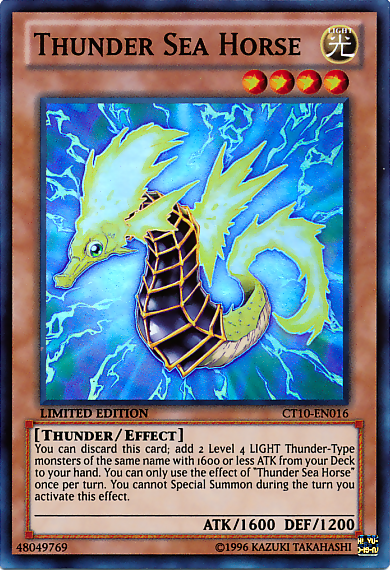 This must be a counter-part to Thunder Dragon, it has pretty much the same effect but with an upgraded version to more fit the effects of today’s standards. It’s actually a fairly awesome toolbox for a number of thunder decks, granting you the ability to keep your hand stocked up with monsters. The downside is the requirement of the added monsters having the same name, which can put the few thunder type players off. 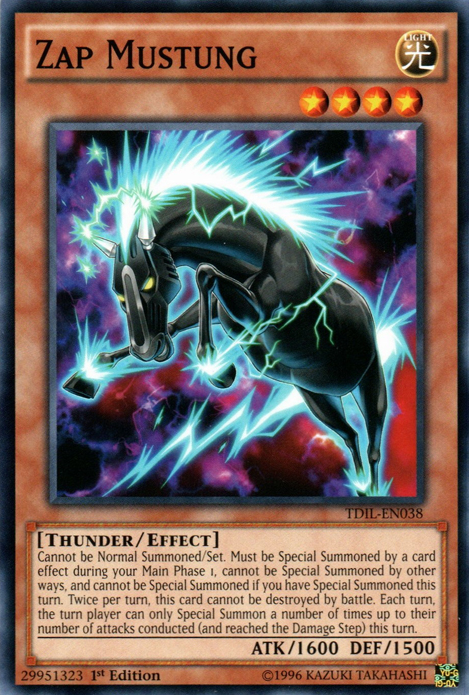 Quite a mouthful, I’ll give you a minute to get your head around the effect..

All done? If you can meet its rather strict demands, Zap Mustung can shut down a large array of enemy decks. Too long have we sat and watched our enemies spend 5 minutes going through all of their summoning abilities. While it is fairly situational, it’ll keep your life points safe until you can find a way back into the game. 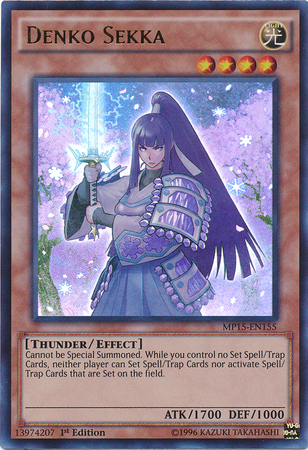 Not the best thunder monster for sure but having a Denko Sekka available can be useful in the right situations. With a modest ATK stat, it can deal some chunks of damage while locking down your opponent’s face down spells/traps. It doesn’t prevent them from activating spell cards from their hand in their turn though and you won’t have anything face down to back it up. If used purely as a means to deal some damage if they have no monsters, it can be a good choice for a thunder type deck. 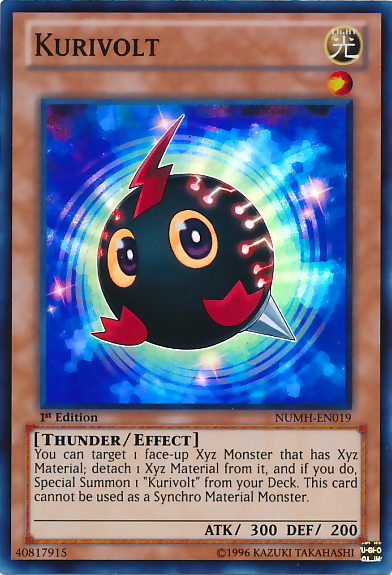 Now we’re getting to the good stuff!

Kurivolt is a distant relative of Kuriboh but it doesn’t fit into the Kuriboh archetype, so it’s fine on this list. It’s incredible for summoning XYZ monsters or being used as a tribute. In case you haven’t realised, Kurivolt can use its effect on an opponent’s XYZ monster which is absolutely massive. This card isn’t powerful in thunder decks only, in fact it can fit into a myriad of other decks, providing an easy way of getting bigger monsters onto the field! 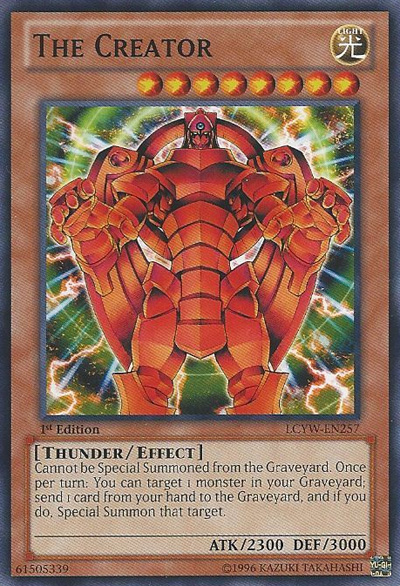 The Creator is a legend in Yugioh, there was once a time where this card dominated. The low ATK (for its level) can be a downside, I’m suspect of leaving it in attack position at times, where it can be easily destroyed. Keep it in defence and you can get a monster from the graveyard each turn, literally any monster. Such a powerful effect is rendered “less than decent” nowadays but it’s still one of the best thunder type monsters in the game. 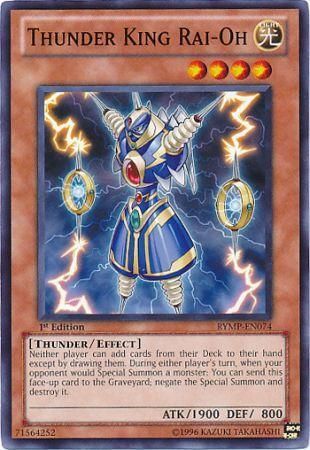 I was tempted to put this card first on the list but you’ll understand why I didn’t when you see the others above it. Make no mistake, Thunder King Rai-Oh is an exceptionally powerful card that can completely disable any strategy your opponent thinks of. With a nice ATK stat of 1900, a first turn summon of this card will put your opponent in a tight spot. It doesn’t have any real cost either, you can use its effect more than once per turn, during either players turn. It is limited to 2 but that’s fine, even one of these cards is a huge advantage. 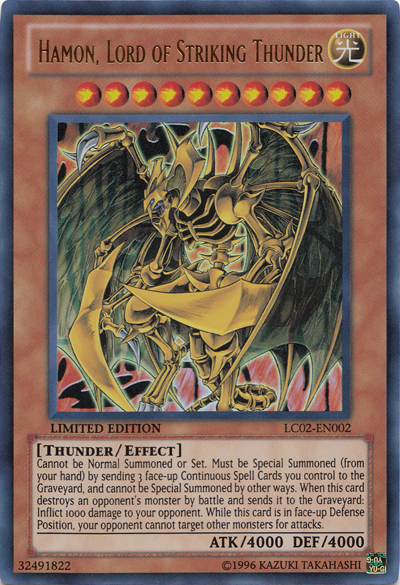 What kind of list would this be if it didn’t have a god damn sacred beast?!

Released during the GX era, Hamon was one of the biggest monsters to hit the dueling field. While it currently falters in terms of survivability, it’s still a potent card that should not be underestimated. It’s easy to summon, looks incredible and fills your heart with nostalgia. What’s not to love? 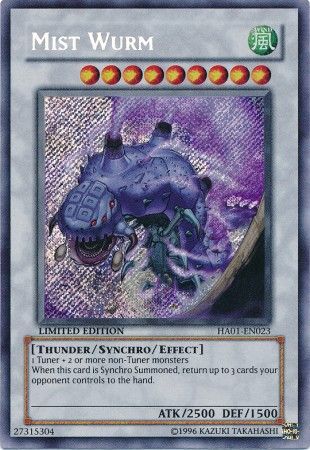 I’d first like to point out that Mist Wurm is a level 9 monster, in case you didn’t notice. It can be a bit tricky to summon as it requires 3 or more monsters but wow, what an effect. So many cards have a “if this card is destroyed or sent to the graveyard” effect so having the option of returning 3 cards to the hand is amazing. Just a few changes would make Mist Wurm one of the best cards in the game, if it was easier to summon or had more ATK/DEF stats. 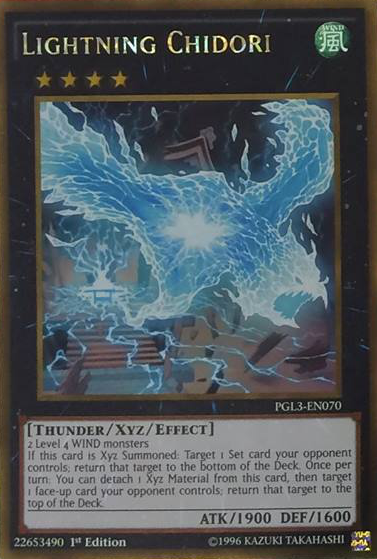 Having your cards returned to your deck is insufferable, especially when they’re turned to the top (it essentially cuts you out from drawing a card). Lightning Chidori takes this to the next level, allowing you to return up to two cards to the top & bottom of the deck, the turn its summoned anyway. The crazy thing is its requirements, only two wind attribute monsters. So it’s insanely easy to summon, with an extraordinary effect. Lightning Chidori is well deserved of the top spot on the list!

Let me know if I missed any out!