Rek’Sai is my most mastered champion with a unique kit that is fun to use. Most people don’t even know that Rek’Sai is female, yeah that’s right, she’s a Queen after-all. She’s had an interesting life cycle in League of Legends, with plenty of highs and lots of lows. This list will give you 10 pieces of information you will hopefully find interesting. Without further ado, here’s the top 10 facts about Rek’Sai! Rek’Sai was released during late 2014, she was initially advertised as a fighter, or even an assassin. Her release was very well received by players, with her powerful and fun kit showing great signs of counterplay. Her ultimate especially was revered for the global sound. Overall it was a very hyped up release that had players excited rather than “oh god no”. 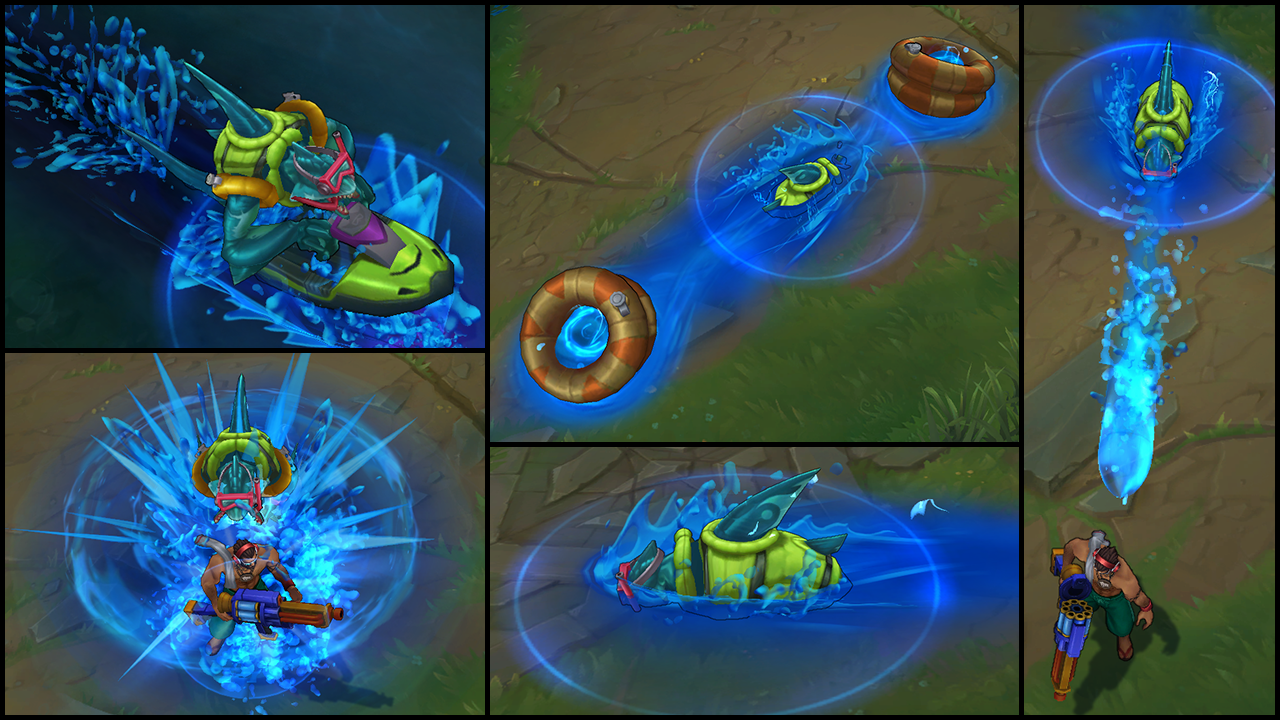 Rek’Sai has sadly only received one skin after her release and that was in June of 2015. Riot are likely holding off on creating another until her rework is finished. She has some awesome fan-made skins though, like Guardian of the Sands and SAW.

Omen was the base that Rek’Sai was built from. Originally its own champion, Omen was cancelled long ago and Riven was released instead. Development was halted due to lack of motivation and direction. They couldn’t find a kit that worked with the thematic and after so much time, they just lost the passion for Omen and he/she was cancelled. Rek’Sai is the Queen of the Xer’Sai, they are a powerful race brought forward by the Void. Rek’Sai appears to be the largest of her species, as one no larger than a house cat was described as ‘average’ size. This truly echoes Rek’Sai’s powers.

Rek’Sai is located in Sai Khaleek of Shurima. She stalks the desert, ambushing any who dare to travel through her lands. Impressively, this large stretch of desert is completely uninhabited and no one goes near it, for fear of encountering Rek’Sai and her Xer’Sai. Traders will even add weeks to the length of their trip, specifically to avoid such a horrifying death. 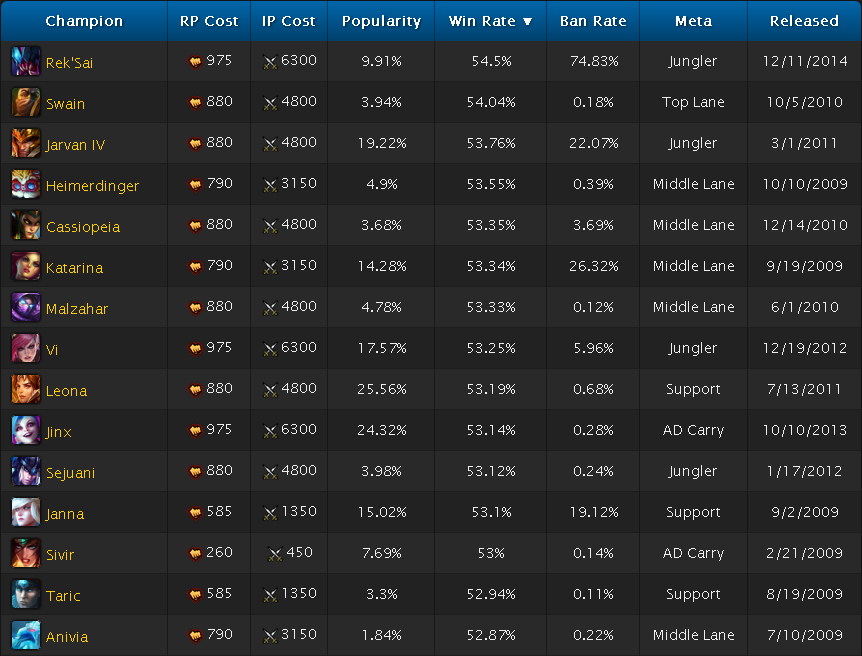 Rek’Sai’s win-rate hasn’t been close to 50% since early last year. Her kit is difficult to use effectively which contributes heavily to such low statistics. In higher elo and pro play, she is useful but the win-rates there cannot boost the losses at low elo. She’s currently sitting at a rather lackluster 46.4% winrate.

Her popularity is actually quite decent overall, of course at low ELO she’s pretty much never seen, people avoid her like the plague. At pro play she’s been a pick/ban for a long time until recently, high ELO she was achieving over 5% pick rate for a while too. Right now she has a 1% pick-rate over all ELOs which is actually quite decent, although still rare. 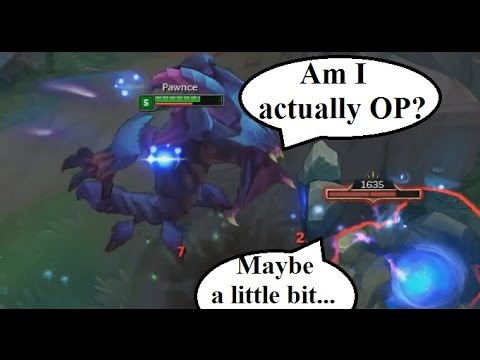 Rek’Sai was widely considered as broken during her release, her tremor sense gave a massive map awareness boost to co-ordinated teams while her damage was absurd. Of course, multiple nerfs followed. First it was her damage, her ratios were reduced to massive cripple her late-game scaling, base damages were then reduced too. Her Q damage was then nerfed even more, although her tunnel use cooldown was reduced. Then her base health was reduced, her unburrow knocked up in a smaller radius and bonus fury for unburrowing was removed. Next it was her tremor sense, the refresh rate was increased from 0.75s to 1.5s, this effectively crippled everyone who wasn’t a pro player as keeping track of targets is now difficult. Then her tunnel and ultimate cooldowns were considerably increased and finally, her base armor and armor growth were reduced.

She’s unfortunately a shadow of her former self, with no real reason to use her over other tank junglers. The only thing she brings is a low cooldown knockup and tankiness.

She’s currently OK to pick if you have a lot of experience with her, Rek’Sai’s early game presence is still kind of there with the tunnel ability. Her clears are decent too, as is her counter-jungling capabilities. But she’s still underwhelming, especially in the damage department, and she falls off hard late game. There’s no real reason to pick her when so many other junglers can do her job better. 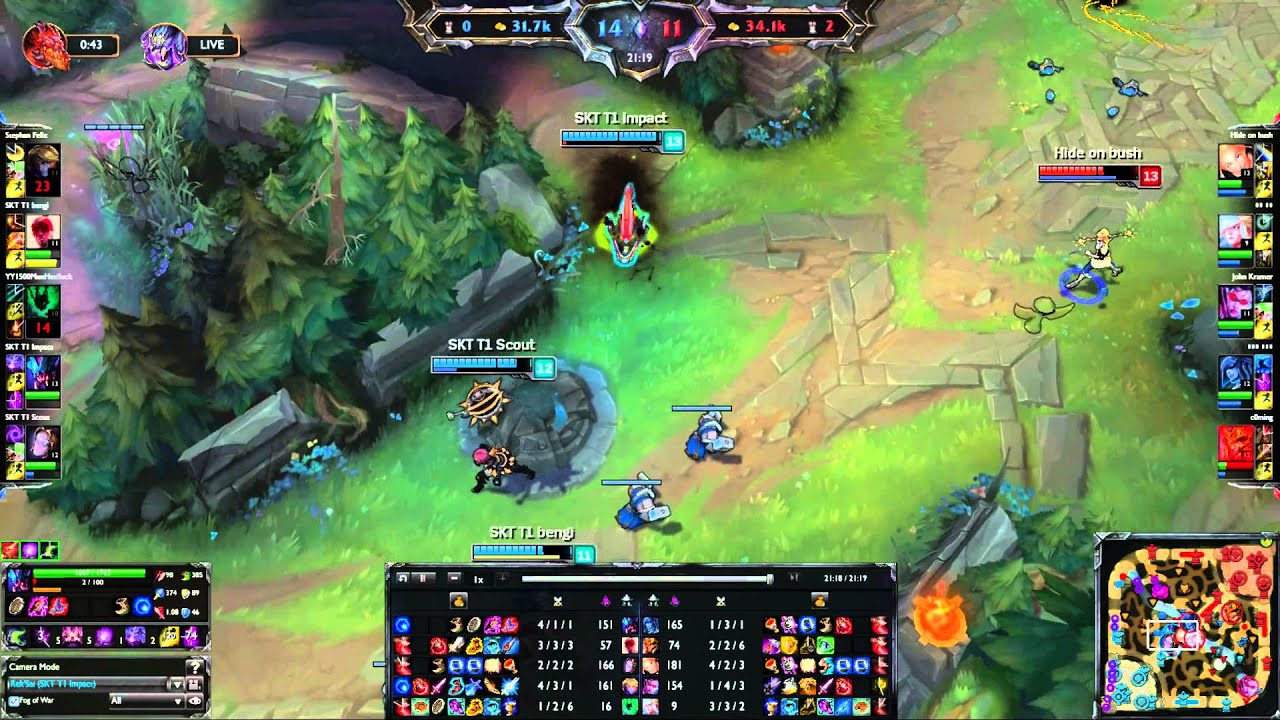 The Void Burrower was a heavily contested pick for a long time, until the massive amount of nerfs finally made her unusable in pro play. Viewers aren’t too bothered as they were tired of seeing her every game. Personally, watching Rek’Sai in Worlds of 2016 made me fall in love with her. It’d be great to see her back on the big stage.